By Amy Wenk and Maria Saporta

The development team charged with remaking Underground Atlanta includes the design firm that worked on Ponce City Market and one of the developers behind Krog Street Market.

It could be a recipe to emulate two of Atlanta’s most successful adaptive reuse projects.

WRS Inc., the new owner of Underground, held its first community meeting Thursday morning to introduce its development team and share with the public its first steps in redeveloping the languishing property in south downtown. 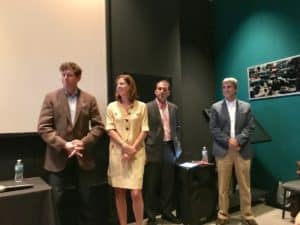 WRS closed on Underground from the city of Atlanta at the end of March.

The architect is New York-based S9 Architecture, the design firm that worked on Ponce City Market, helping to transform the former Sears, Roebuck & Co. warehouse into a bustling mixed-use development along the Atlanta Beltline.

Revel, a retail consulting and development firm led by George Banks and Kristi Rooks, is handling the merchandising and leasing for Underground Atlanta. Read more about Revel here.

Banks was formerly with Paces Properties, the company behind Krog Street Market, a hip food hall in Inman Park that brought top Atlanta chefs, including Chef Ford Fry, under one roof.

Rooks previously worked with WRS, and prior to that, downtown advocacy group Central Atlanta Progress, where she helped lead their pop-up retail program that brought temporary tenants to vacant storefronts along the Atlanta Streetcar line.

Other team members include Demetri Baches with Metrocology, who will serve as urban planning advisor, and Visual Soldiers, which will work on branding.

Tim Norton with WRS is the project manager. 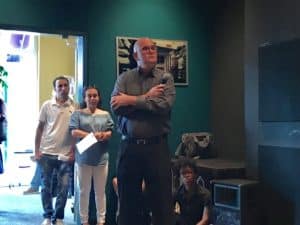 “What we are working on here is a complete transformation,” said Steve Howe, chief operating officer of WRS. He said the focus will be to remake Underground Atlanta into four city blocks with a variety of uses.

That will include a mix of housing options, along with new retail and office space. A grocery store is likely to be part of the project.

Howe emphasized WRS has no plans to include a Walmart at Underground, a retailer the company has partnered with at some of its other projects.

The plan is to keep historic buildings such as 86 Pryor Street, a brick office building. Other new structures will be built to increase the project’s density. WRS is currently in talks with residential developers.

“This is not scrap everything and start over,” Howe said.

Construction will be completed in phases. The first phase could finish in 18 to 24 months, Howe said.

The first step is to move existing tenants from Lower Alabama Street to Upper Alabama Street. Those include Foot Locker, Subway, Pandora, Skillz, Best of Atlanta and Kempani. That should happen around Aug. 13.

No doubt the development team faces challenges in securing new retail tenants. It’s been decades since south downtown was a vibrant shopping district. Many of its buildings today sit vacant. And, those that are occupied get low rents, possibly around $10 to $15 per square foot, if that.

Plus, several national chains, especially mall retailers, have been announcing bankruptcy and store closures. Retail is certainly in a time of evolution as e-commerce sales rise.

Banks said his firm plans to “un-mall” Underground and help the project blend better into the surrounding urban landscape. Underground, which today has about 225,000 square feet of retail, likely will decrease that amount of space and devote it to new offices, which would be within a short walk to the Five Points MARTA station.

“My job is to create a really great environment that brings lots of people to the building,” Banks said. “It’s incumbent for me to make it so great that people are living, working and visiting at all times. If you do that, even in 2017, you will have tenants that make a business.”

Banks added, “Downtown has 120,000 jobs, 30,000 students and two million visitors a month. There are enough people down here to support some big retail. Downtown is arguably one of the few places in Atlanta that is under-retailed.”

After years of neglect, south downtown is now seeing its biggest wave of new investment. Atlanta Business Chronicle shared new images of a sweeping plan to remake dozens of south downtown buildings from German real estate company Newport US RE.

In all, nearly $4 billion worth of projects are planned for south downtown, from the latest plans to build a $1 billion mixed-use project around Philips Arena to the sprawling redevelopments of Underground Atlanta and Turner Field.