Higher-income folks play a part in the affordable housing discussion because there is an unmet demand for rental apartments at their price points in at least one area that was studied – Buckhead. 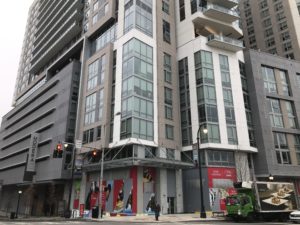 Rental apartment prices in the new Modera | Buckhead start at $1,705 for one bedroom and 634 square feet. A three-bedroom unit with 1,282 square feet starts at $3,485, according to the website. Credit: David Pendered

The shortage of higher-priced units puts wealthier households into apartments that aren’t as fancy as they may prefer, and that charge rents lower than they can afford.

In turn, folks who would stretch to pay for these units find that many rentals are occupied by households that have no need for landlords to offer concessions.

These broad outlines emerge from findings in a report by Livable Buckhead. The non-profit organization retained HR&A to help evaluate the relation between housing and traffic congestion. The goal is to reduce congestion in Buckhead.

The role that higher-income households play in Buckhead’s housing market was among the study’s surprises, according to Denise Starling, executive director of Livable Buckhead. 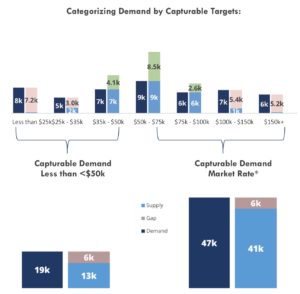 An unmet demand for rental apartments priced for lower- and higher-income households exists in the Buckhead area,a study shows. (Excludes a share of mid-income households with an adequate supply of housing.) Credit: Livable Buckhead

“Going into the study, we thought there was a ‘missing middle’ problem,” Starling said.

“It turns out that there is a pretty healthy supply of units in the mid-market, but it’s being absorbed by renters at both the upper and lower ends of the income spectrum who can’t find housing to match their price points,” Starling said.

The role of higher income households is an outlier in the ongoing discussion over affordable housing in metro Atlanta.

Most attention has been paid to efforts to ease the shortage of dwellings affordable to those earning the salary of a public school teacher, or less. The result of this focus includes the launch in January of the Atlanta Affordable Housing Fund, and Atlanta’s proposed sale of up to $100 million in bonds to help fund housing projects; bonds are to be issued by an affiliate of the city’s development arm, Invest Atlanta.

The role of the higher-income households in the market appears in HR&A’s report, including this observation – where “capturable demand” translates roughly to a “shortage of supply:” 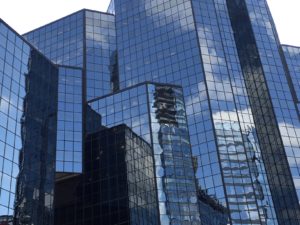 The report reveals the existence of a clear gap between the price that higher income households can pay for a rental home and the supply of homes priced at that level:

These higher salaries aren’t off the radar in Buckhead’s employment sector. Four key employment sectors with over 30,000 workers pay average salaries of $100,000 a year or more, in the sectors of finance and insurance; professional and technical services; information, and legal services, according to the report.

Note to readers: On Thursday, a seminar ‘Buckhead: Demographics, Trends and Growth’ is to sponsored by Livable Buckhead, in partnership with the ARC and Buckhead Business Association. Ticket information is available here.