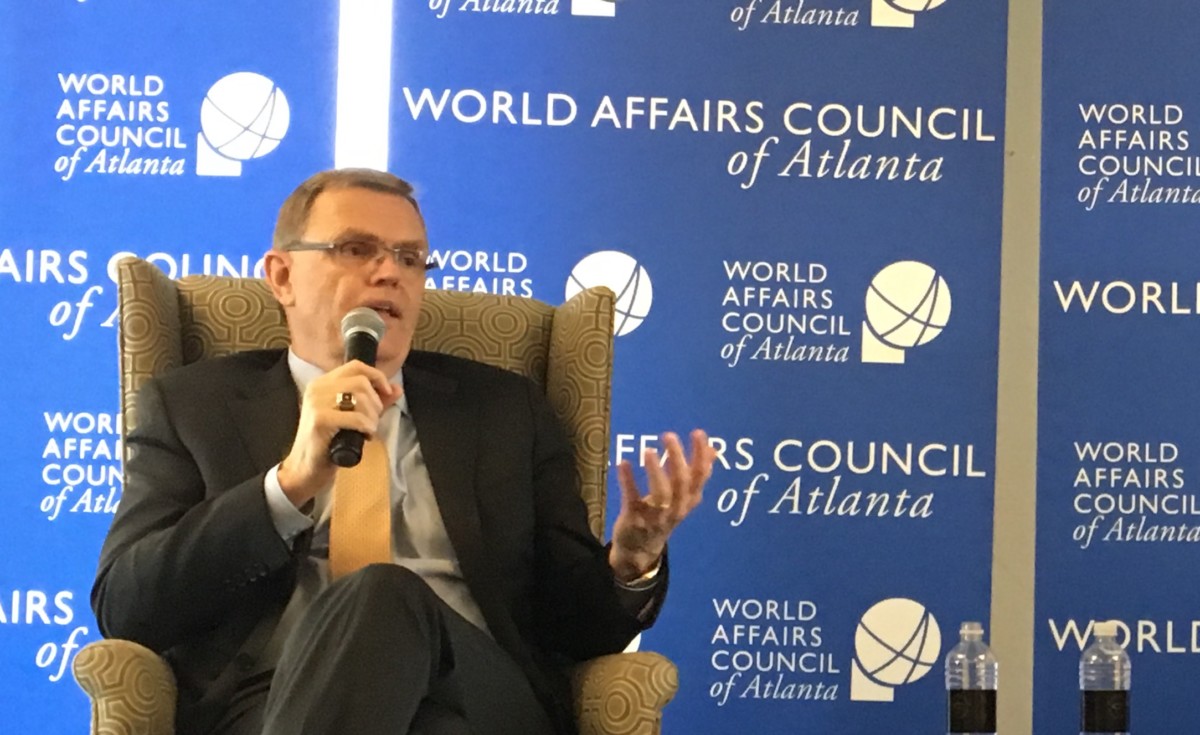 UPS CEO David Abney, in extensive comments Wednesday about trade, said he's hopeful the U.S. and China can come to some negotiated agreement to end trade tensions as early as next month. Credit: Maggie Lee

In a world with a trade-warring U.S. president, Eurosceptics in Great Britain and a China trying to expand its trade footprint, UPS CEO David Abney talked about what’s on his mind as someone who oversees a global shipping and logistics company during a Q & A on Wednesday.

Abney made the case for freer trade, speaking to an audience of more than 100 people at a lunch on Wednesday hosted by the World Affairs Council of Atlanta. He listed the benefits: jobs in the United States and in other countries, business for exporters, lower prices and more choices for shoppers.

UPS delivers about 20 million packages a day worldwide — many of them sent or received by the smallest of small businesses. The more customs and border processes are simplified, he said, the cheaper it is for small businesses, whether they be in Marietta or Mumbai, to reach global markets. Then maybe those small businesses become large businesses. 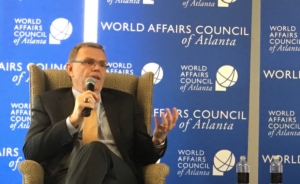 UPS CEO David Abney, in extensive comments Wednesday about trade, said he’s hopeful the U.S. and China can come to some negotiated agreement to end trade tensions as early as next month. Credit: Maggie Lee

But speaking to an audience thick with folks who work in sectors like logistics, freight forwarding and customs clearance, he mentioned a maybe unpopular point: not everyone sees freer trade working for them.

When it comes to global trade and ties, things are pulling in different ways, and not all are good for people in Abney’s industry. President Donald Trump repeatedly called the North American Free Trade Agreement the worst trade deal ever done; and he pulled the U.S. out of the Trans-Pacific Partnership as the partner countries worked on ratification of what would have been a 12-country pact. China and the U.S. are in what in what appears to be a growing trade war. British voters in 2016 voted to leave the European Union.

On the other hand, China’s touting a “belt and road” initiative: it wants to finance works on roads, airports, ports and rail in a trading network across Asia, Africa and Europe.

Well, start with the United States-Mexico-Canada Agreement. Signed a little more than two weeks ago, it’s a revised trade deal among the partners who formerly made up NAFTA. The deal still needs the approval of each country’s legislature.

“If there’s anything that makes us anxious, it’s there are lots of regulations and things that have got to be worked out,” Abney said.

There’s a deal in principle, yes, but governments are still working on some language too.

“We’re never going to be completely comfortable until we see that,” Abney said.

He said what’s exciting is that some restrictions will be reduced: “While we will not have a frictionless border, it will be less friction than what we have today.”

Abney is even hopeful that the United States, somewhere down the road, will be part of some kind of TPP, some kind of free trade deal with countries on the Pacific. Several of them have already approved a revised TPP that may take effect as early as next year.

“Just because the U.S. may not be signing free trade agreements, the rest of the world has been signing them pretty rapidly … we can fall behind,” he said.

What Brexit may mean is still up in the air.

“A lot of our customers that distribute out of the U.K. are looking at what do they need to do, that uncertainty,” Abney said.

Now as for China trade, Abney said that UPS and probably other international businesses recognize that there were things going on in China that need to be “addressed,” like compliance with World Trade Organization and intellectual property standards.

He said UPS is in agreement with the objective of making sure that all parties are in compliance with trading rules.

“It’s the tariffs and the unintended consequences where we get concerns,” said Abney, like the possibility that U.S. companies start to get targeted for more inspections and delays when their goods arrive in other countries such as China. Or that Chinese consumers start to get used to suppliers from other countries and don’t come calling again when trade tensions might be eased.

He said UPS is hopeful that the United States and China reach a negotiated settlement to end trade tensions, and thinks the earliest possible time for any such deal could be the Nov. 30 G20 summit in Buenos Aries. Both Trump and China’s President Xi Jinping are scheduled to be there.

Still, what companies generally crave out of regulators is predictability, knowing far ahead of time if and how things will change. Trump has a bit of a gift for surprises, sometimes announced via Twitter.

At the beginning of the Wednesday lunch, Laura Dawson took the stage to ask the questions to Abney. She’s director of the Canada Institute at the Wilson Center, a think tank. She opened with a joke that she’d like to have more Twitter followers than the day’s emcee, Ambassador Charles Shapiro, president of the World Affairs Council of Atlanta.

“When I get up in the morning, it’s not your tweets that I worry about,” Abney said.