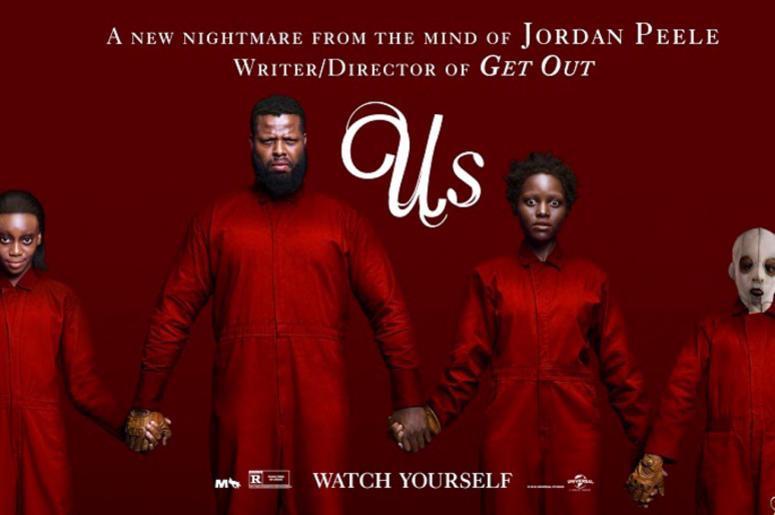 “Get Out” is an admittedly hard act to follow, but Jordan Peele’s “Us” feels less like a sophomore slump than “Didn’t something like this happen to M. Night Shyamalan?”

You remember M. Knight. Having hit it out of the park with his debut film, “The Sixth Sense,” Shyamalan has spent the rest of his career trying to come up with a “Seventh Sense” or “Eighth Sense” or “203rd Sense” or something. 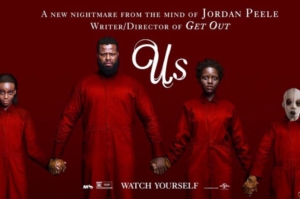 That’s not likely to happen to Peele. “Us” has its problems, but it has its pluses, too, most notably, a helluva kicker and an astounding double-whammy of a performance by Lupita Nyong’o.

As you may already know from the previews – and if not, it happens pretty early in the movie – Adelaide (Nyong’o), her husband (Winston Duke) and their children (Shahadi Wright Joseph and Evan Alex) have headed to the beach for a family vacation. But Adelaide hasn’t felt right about the trip from the very beginning. Mostly because it’s near the Santa Cruz boardwalk where, as we witnessed in a chilling prologue, she had an uncomfortable experience as a young girl.

For whatever reason, she never shared this with her spouse, and now they’re headed back to the same place for some sun and sand. Shivery little things occur, but nothing horrific until…

Back home, after dinner, the family looks outside and standing in their driveway are four people in red jumpsuits. Four people who look exactly like them (“Us” says young Alex).

Their doppelgangers, as these doubles are often called, aren’t there for a friendly visit. Golden scissors in hand, they have mayhem on their mind(s). Much of the rest of the picture is about who survives – and how. And, to add another disturbing layer, why.

Peel knows his horror pictures, and “Us” is full of scary stuff. But at some point, we get a bit worn out.  And confused.

And after he pours on several movies’ worth of explanation in the last 20 or so minutes, we’re still confused. Or at least, I was.

A lot of movie writers weren’t. They see “Us” as an intriguing cultural critique, cannily wrapped inside traditional horror-movie tropes. Maybe so, but I think that’s stretching it. 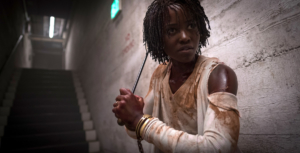 A scene from the movie “Us” starring Lupita Nyong’o

Or maybe I was hoping that “Us” would add up to more than a savvy riff on Walt Kelly’s mantra from his legendary “Pogo” comic strip, i.e.: “We have met the enemy and he is us.”

Then again, I thought that was pretty smart when it first appeared decades ago.

Even if “Us” doesn’t all add up, it still has much to recommend it. The sleek stylishness with which it’s made. The aforementioned prologue, like a perfect little “Twilight Zone” episode (which, incidentally, Peele is reviving for CBS). The clever cultural footnotes (Remember Hands Across America?).

Most of all, there’s Nyong’o who may be an Oscar winner (for “12 Years a Slave”), but needs more chances to strut her stuff as she does here. She’s superb as Adelaide, the embattled matriarch, and as Red, the double-from-God-knows-where whose raspy voice sounds like a creaky rusted-out water pump (Think, “The Miracle Worker” and “Wa-Wa”).