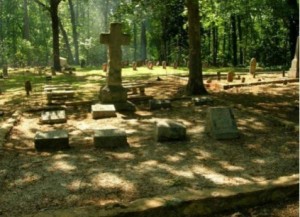 Utoy Cemetery in southwest Atlanta is on the Georgia Register of Historic Places for its Civil War significance. Credit: Terry White.

Stories of heroism, honor, sacrifice on the field of battle—the kind repeated every Memorial Day—are in a peculiar way not only about the people whose lives are remembered through them. They are also about us and where we come from.

This is true for Malcolm McDuffie, who has long championed the preservation of a cemetery that represents great significance to his own family, as it does for the history of Georgia. The Utoy Cemetery is connected to one of Atlanta’s earliest churches and the remains buried there tell stories about his ancestors, the Civil War and our common history.

Utoy is also the final resting place for soldiers who fought in every war from the American Revolution to the Vietnam conflict, and is a popular stop on Civil War tours. Part of a trench is preserved there from the Battle of Utoy Creek, a Confederate victory that delayed Sherman’s March to the Sea. The Union general ultimately prevailed after outflanking rebel troops south of East Point, severing the rail lines and sealing the doom of Atlanta and the Confederacy.

With 2014 marking the 150th anniversary of the Battle of Atlanta, this Memorial Day is a perfect time to catch up with the volunteers who work hard to preserve these important stories—like McDuffie does.

Giving back to ancestors

As a child, McDuffie, regularly visited Utoy Cemetery with his grandmother, Exie Ellis Cochran, to clean off the family plot. The Utoy cemetery is located next to the former Utoy Primitive Baptist Church (now the Temple of Christ Pentecostal Church) at 1911 Venetian Drive SW. At times, he recalled, “you couldn’t tell there was a cemetery there.”

“It was not maintained very well,” said McDuffie, a 71-year-old retired telecommunications consultant who lives in Lilburn. “Neighbors used it to dump their leaves there.”

Eventually, his grandmother would be buried there, too, along with her husband, one of their infants and multiple ancestors including a nurse who served at the Civil War field hospital converted from the Utoy church. The nurse’s father, a War of 1812 military captain believed to have donated the land for the church and the cemetery, is interred as well.

History was important to the Cochran family, and McDuffie absorbed that value. His grandmother helped raise him, and “my mother’s brothers were like surrogate fathers to me. They were all very good Christian people,” McDuffie said.

“She was very important to me,” said McDuffie of his grandmother. “I heard all the stories about the family from her. 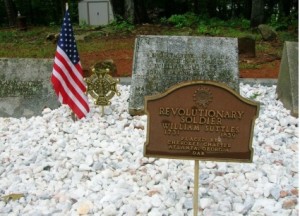 The restored gravesite of William Suttles, who fought in the Revolutionary War. Credit: Sanford Peace

Among them is the story of how the church was born in 1824. Isham Hendon, a captain in the U.S. militia in the War of 1812, moved into the area after his service. According to stories handed down by McDuffie’s family, Hendon donated the land for a church to provide a worshiping place for Sally Murray Hendon (McDuffie’s great-great-great grandmother). She died a year later, and may be the first person to be buried in the cemetery, McDuffie said.

The claim is disputed. McDuffie has no records documenting the land donation because they were likely destroyed in a courthouse fire, he said. Surviving court records indicate the property was donated to the church six years after Hendon’s purported donation, in 1830, by two other landowners, according to at least one historical account.

However, McDuffie recalled that, as a child, the church deacons would ask permission from his grandmother to cut down a tree on the property. If the wood was sold, the proceeds could either be used for church purposes or divided among the Hendon family heirs. That was a stipulation included in Isham Hendon’s will, McDuffie learned from his grandmother.

Cochran also told McDuffie about how her own grandfather, John Ellis, had returned from a prison-of-war camp in Savannah with a scar below his chin from a minie-ball that could have killed him.

“They didn’t know he was alive until they saw him come walking home,” McDuffie said. “That’s how a lot of families found out their loved ones survived. There was no other way to communicate.”

Fixing up the place

“It’s been a major undertaking to fix that place,” said McDuffie, the group’s vice president of operations. 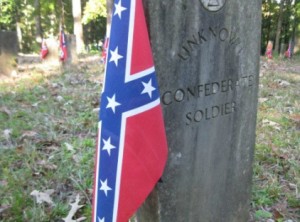 The grave of an unknown Confederate soldier in Utoy cemetery. Credit: Debbie McDuffie.

At least 34 Confederate soldiers are buried in the 3 1/2-acre cemetery. Joshua Gilbert, Atlanta’s first doctor when the city was called Marthasville is also buried there.

Gilbert treated wounded Confederate soldiers at the church when it was a field hospital. Among those treated was Georgia Gov. James S. Boynton, who was an army colonel for the Confederacy prior to entering politics and leading Georgia briefly in 1883.

In the group’s application to the National Register, which McDuffie co-wrote with Lt. Col. Perry Bennett and Terry White, the group asserted that the Battle of Utoy Creek was a significant roadblock to General William T. Sherman’s juggernaut to victory during his Atlanta campaign.

“The battle of Utoy Creek was a major victory for the Confederates and a terrible loss to the Union Army under Sherman,” wrote McDuffie, Bennett and White. “The Plan of Sherman was poorly executed by (Major Gen. John) Schofield, forcing Sherman into Siege Warfare.”

Nearly 2,000 Union soldiers in two corps were either killed or wounded compared to the deaths of 35 Confederate soldiers and the wounding of 200 others, the group wrote.

According to the group’s application, Sherman underreported battle losses and tactical failures to the Union government to protect President Lincoln, then facing re-election, from any political fallout. 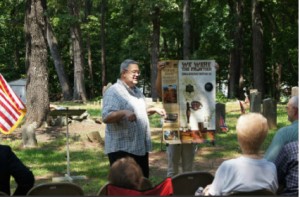 Malcolm McDuffie talks about the War of 1812 and his ancestor who fought in it, Capt. Isham Hendon. Credit: Debbie McDuffie.

With 2014 marking the 150th anniversary of the battles of Atlanta and Utoy Creek, the cemetery association plans to hold a lecture and an open house on August 2nd , to commemorate the historic event.

The group is also raising money to pay for a radar survey and mapping project to find as many as 200 unmarked gravesites of Atlanta’s earliest settlers and former slaves who worshipped at the church and are buried at Utoy. (For more information, go to www.utoycemeteryinc.org/urgent-funds-request-for-gpr.)

Meanwhile, the group may have to wait a little longer for the recognition from the National Register.

“Eventually it will happen,” said McDuffie.

More important, he can lay claim to a strong effort to link past and present. “I did my part,” he said.