Varying views on value of Atlanta Chamber having its own home 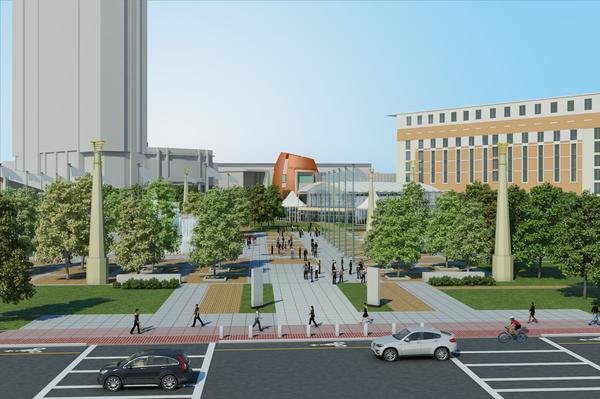 A host of issues – and a myriad of views – are wrapped around the proposal by the Georgia World Congress Center to buy the building, tear it down and replace it with green space.

Originally, the idea was to open up the front door of the convention center and the newly-built College Football Hall of Fame as part of a master plan to re-invest in Centennial Olympic Park as it celebrates its 20th anniversary in 2016. 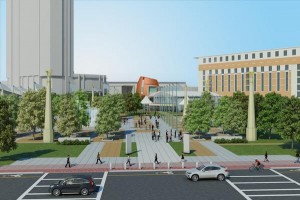 This column features varying views from several people who were willing to share their thoughts and perspectives. It follows a column that I wrote two weeks ago addressing the history of the building and the area.

The hope is that we as a community can openly weigh in on what is the best avenue forward as a city.

There are those who believe the Chamber should stay where it is in the existing building.

There are those who believe the Chamber should rebuild a new home on the same site.

There are others who believe that the Chamber should have its own building, but that it could be located elsewhere.

And then there is the view that the Chamber no longer needs the building, and it should just lease office space in a building downtown.

Let’s begin with the view from Hala Moddelmog, who became president of the Metro Atlanta Chamber in January, 2014.

Moddelmog said the Chamber leadership has decided that if it sells the building, the organization will continue to be based downtown – most likely in leased space. 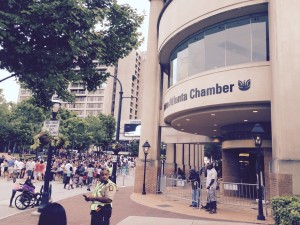 “I understand the emotion around the building and having a place,” Moddelmog said. “A building can be part of a brand and a place where people can congregate. We are going to miss the roof top. We are going to miss the Rotunda. But we will always be looking for ways to showcase our city. We also want to be good corporate citizens. If Centennial Olympic Park wants to be refreshed and celebrated, that’s a good thing.”

Jenner Wood, a SunTrust executive who is chair-elect of the Chamber, said that if the GWCC presents a contract with the terms that “we have verbally agreed to, we will accept it.”

(It has previously been reported that the sales price would be in the range of $10.5 million.)

By the way, Chamber Chairman Larry Gellerstedt III, who is the CEO of Cousins Properties, recused himself from the discussion.

Cousins owns the 191 Peachtree building, a pre-eminent downtown tower, and Wood acknowledged that there would have been a perception as well as a real conflict of interest if Gellerstedt were to have been involved.

“We wouldn’t want to be constrained from making the best deal for the Chamber based upon a perceived conflict,” Wood added. “We weren’t looking to leave. This has been a wonderful location for the Chamber – both with the visibility and economically. But I don’t think we have to have a physical site to keep our visibility in the community.” 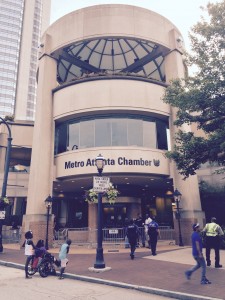 A view of the existing Chamber building on July 4 with Rotunda and the rooftop terrace above (Photo: Maria Saporta)

The Chamber built its headquarters in two phases. The original building was designed by Atlanta architect Mack Scogin in 1985 (at the time, the location less than desirable – read my previous column).

Once Atlanta won the 1996 Summer Olympic Games, the decision was made to expand the Chamber building and create a roof-top terrace as well as grander meeting spaces – including the Rotunda overlooking the park. Atlanta architect Mike Sizemore designed the expanded Chamber building.

Both had strong feelings about the Chamber’s plans.

“I don’t think the building is precious, but I do think the site is,” Scogin said. “I would tear it down and start all over…. I think it would be a shame to give up that location. It really could be a gateway – something that’s about the future of Atlanta. There is something about the symbol of a building – bricks and mortar – that says something about the establishment of a place and an organization. Atlanta needs buildings that identify the character of the city.”

Sizemore felt the existing building should be preserved, arguing that it is fully functional and works well as place for the Chamber to showcase the city.

When he got involved with the design in the mid-1990s, the idea was that the Chamber needed a high profile building because it represented the stature of the Atlanta business community. 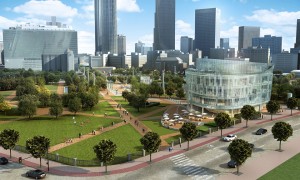 Another view of earlier concept of how a new Chamber building could open up vistas on the park (Special: GWCC)

“If I were at the Chamber, I would be concerned with a drop in public status of the institution if they were to give up this iconic, dramatic location for space in a typical office building,” Sizemore said. “In addition they would give up the roof deck, which has been very popular.

The idea of trying to align the College Football Hall of Fame to be the predominant axis or icon replacing the Metro Atlanta Chamber will also say that we think college football is more important to the City of Atlanta than the Atlanta business community. Is that the message we want to give to the world?”

Mick Fleming, president of the American Chamber of Commerce Executives, said many large metro chambers operate out of lease office space instead of their own buildings.

When the Atlanta Chamber building was first developed, Fleming said it was “courageous and forward looking – and indeed lucky” with the subsequent winning of the Olympics and the development of the park.

“Thirty years later, the building may not fit the Chamber’s goals and needs, or those of the businesses it serves.  And that’s okay,” Fleming said. “The nostalgic comment from a 4th of July fireworks spectator was a nice touch, but it has little to do with whether the Chamber owns its building. Rented, or owned, the Chamber may have a view of the show from its corner office or rooftop.” 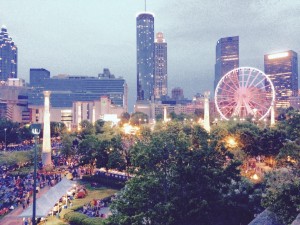 A view of Atlanta from the rooftop of the Metro Atlanta Chamber (Photo: Maria Saporta)

Whether the Chamber sells its building depends on whether the GWCC Authority will be able to raise the money to enhance the park and buy that property.

“It’s way premature for us to say where the money is going to come from,” said Tim Lowe, former chairman of the Georgia World Congress Center Authority who serves as chair of its development committee. “If the Chamber building were to be acquired, it opens up opportunities to provide more vistas into the park.”

Lowe said the GWCC wants to bring back the sparkle that the park had when it opened in 1996.

Sam Williams, past president of the Metro Atlanta Chamber, said the building has been valuable to the business community as a focal point for the city’s leaders.

“Since I retired, I haven’t been involved in the process,” Williams said. “I can only assume that Hala and the CEOs on the board have considered all the alternatives. The new leadership has to deal with those issues – not someone who has just retired.”

Gerald Bartels, former president of the Metro Atlanta Chamber who led the effort to build and then expand the building, questioned the decision to sell.

“The whole idea of the Chamber owning its own building is number one – visibility, and number two – economics,” Bartels said. “Nonprofits don’t get a deduction for rent so if you own your own building, at the end of 20 years, you have equity in it… If I were president, I would argue that we should preserve the building at that location. But I’m not the president.”

Then he added that he hoped that for the Chamber’s sake, that they would do an economic analysis of whether to own its building or pay rent, which is always escalating. 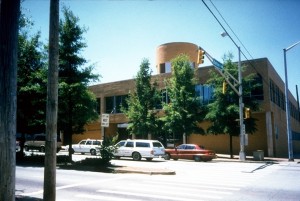 Bartels did build Chamber buildings in Jacksonville, Fla. and Greenville, S.C. He said hundreds of chambers own their own buildings, including those in the large Georgia cities of Macon and Columbus as well as the chambers in Gwinnett County and Cobb County.

“I have always believed in the Chamber having its own stand alone, highly visible strategic location – a place that the members and the community could see, touch and feel,” Bartels said. “I thought a building projected a sense of power. I wanted to send a message that here is where many of the big decisions affecting the community are made. I wanted the members to feel a sense of pride.  Visibility and accessibility helps builds a brand.  It is harder to achieve those objectives if you are lost in a high-rise building somewhere.”

Bartels acknowledged that he does feel sentimental about the prospect of the building being sold.

“The Chamber will never again have such a landmark location,” Bartels said. “There is no metro Chamber in the nation that has a more visible location.”

GWCC officials, who do not comment about ongoing real estate negotiations, did propose other options to the Chamber – including building a new facility across from the Georgia Aquarium on the site of the park’s current maintenance and administration facility. 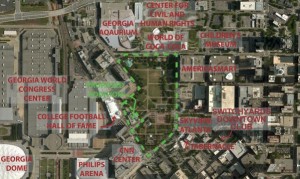 One idea would be to build a new Chamber building to include an Olympic-related attraction to highlight the Centennial Olympic Games in Atlanta. An exhibit currently at the Atlanta History Center could be based right on the park where it would be more accessible to the public.

The Metro Atlanta Chamber has tremendous legacy – offering enlightened leadership during turbulent times – that helped steer the city and state to becoming the metropolis it is today.

Moddelmog said that history is vital as the Chamber ponders its future.

“We can still be a hub in a building and still honor our past,” she said. “We will always honor our past. We have a brand but our brand is not nearly as important as the brand of Atlanta.”

Note to readers: This is the second in a two-part series about the Metro Atlanta Chamber and the future of its building. To read part one, please click here.

Previous Article
Too many guns, or not enough? How the debate has shifted
Next Article
Buying plums, tomatoes, broccoli, mangos before hopping on MARTA at West End station