Metro Atlanta enters summer with no areas of abnormal dryness, though portions of the coastal area are showing signs of being dry and the level of moisture in soil is falling across the state, according to an array of state and federal reports. 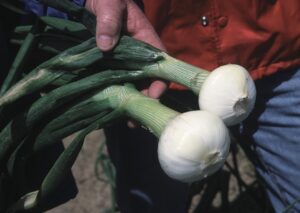 The harvest of a large crop of Vidalia onions has been aided by dry conditions, according to Clint Thompson at VSCNews. Credit: NRCS via Commons Wikimedia via site.extension.uga.edu

Vidalia onions have benefitted from the dry conditions in their region of southeast Georgia, according to Pam Knox’s May 25 report on her climate blog at the University of Georgia. Knox reports that most of the onion crop has been harvested. The latest report from the U.S. Department of Agriculture, dated May 23, shows 95% of the onion crop has been harvested – which is right on target with the five-year average.

In good news for fans of the trademark sweet onion, Knox cites a May 13 report written by Clint Thompson at VSCNews that observes:

In reports about other crops eagerly awaited at the grocery store or farmers market, about 60% of the blueberry crop had been harvested by the report date. Corn production is on schedule, with ears emerging and silking beginning at traditional rates. Peanut planting is slightly behind the five-year average, and the harvesting of peaches, at 13%, is nearly at the 14% average, according to the May 23 edition of the “Georgia Crop Progress and Condition Report,” produced by the U.S. Department of Agriculture

This is the scenario at the unofficial start of summer. The season officially begins in three weeks, on June 20. Memorial Day weekend has long marked the unofficial beginning of the nation’s summer season. 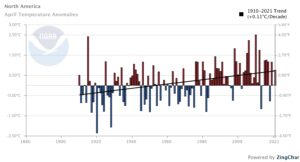 Temperatures recorded on land in North America in April have been steadily climbing since the turn of the 20th century, according to NOAA’s report on May 30. Credit: ncdc.noaa.gov/cag/

Metro Atlanta begins the season with rainfall amounts at Atlanta’s airport reported as slightly above normal for the past 90 days. About 5 inches of rain has fallen in those three months, which has helped offset a shortage of about 3 inches recorded during the previous six-month period, according to a report by the National Weather Service.

For the year at the airport, total rainfall was recorded at 51.39 inches; normal value is 50.43 inches; the departure from normal is plus-0.96 inches for 102% of normal, according to the NWS.

Forecasters have already issued their predictions for an above-average hurricane season. The storms often spread across Georgia and can reach metro Atlanta with dousing rain and tree-downing winds. Hurricane season extends from June 1 through Nov. 30.

These numbers compare to the 14 named storms in an average season. Of these 14 storms, seven become hurricanes and three of these spawn winds at 111 mph or higher. 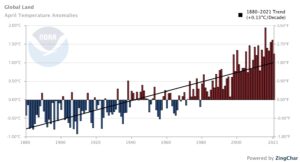 Global temperatures recorded on land in April have been steadily climbing since the turn of the 20th century, according to NOAA’s report on May 30. Credit: ncdc.noaa.gov/cag/

The May 27 report by the U.S. Drought Monitor shows the Savannah area has some scattered pockets of abnormally dry conditions.

Northeast of Savannah, the coastal plains of North and South Carolina are faring even worse. Moderate drought conditions are reported from near Columbia, S.C. north into southern Virginia to the Chesapeake Bay.

Across Georgia, levels of soil moisture have dropped compared to the previous week, according to the “Georgia Crop Progress and Condition Report.” The readings show: 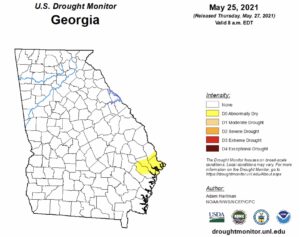 Previous Article
Let’s be honest about single-family housing
Next Article
Giving Ms. Rose Her Fight Back