As Atlanta’s understaffed trash collection service struggles to pick up waste under the extra burden of COVID-19, volunteers are picking up debris in neighborhoods. The latest effort cleaned a stretch of Martin Luther King, Jr. Drive and painted over graffiti at a MARTA rail station. 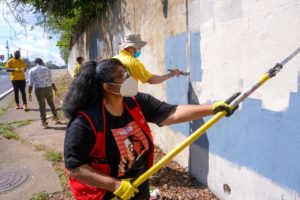 “With COVID-19 hitting sanitation and solid waste, neighbors said they wanted to help them keep the neighborhood clean,” Atlanta City Councilmember Andrea Boone said Monday. “When you have a lot of manpower, you can get a lot done.”

Boone’s office organized the clean-up campaign on Sunday. About 130 volunteers, plus city employees from the departments of public works and corrections, filled bags with trash collected along the ML King Drive corridor from near Adamsville, at Bakers Ferry Road, to MARTA’s H.E. Holmes Station – where they painted a wall soiled by graffiti. Trucks from the city’s Public Works Department hauled away the bags gathered by groups including the World Mission Society Church of God and Jackson Memorial Baptist Church.

The volunteers filled a labor gap left by Atlanta’s Department of Public Works. The division that collects household debris from bins, as well as yard debris and bulk items stacked at the curb, plus roadside cleanliness and beautification projects at gateways into the city, has been severely impacted by the pandemic, according to Public Works Commissioner James Jackson.

“We are continuing to address the work with the personnel available,” Jackson said at the Aug. 25 meeting of the Atlanta City Council’s City Utilities Committee. 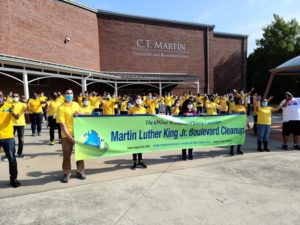 About 130 volunteers gathered Sunday to clean up debris along Martin Luther King, Jr. Drive, including about 100 who represented the World Mission Society Church of God. Photo provided by Andrea Boone

The department was short staffed even before COVID-19 began thinning the ranks, Jackson said.

Atlanta’s solid waste service division is short 77 employees because of challenges in hiring and retaining staff, Jackson said. Of 457 allocated positions, the staffing chart shows 380 positions are filled – for a staffing ratio of 83 percent. Nearly half the vacant positions are assigned to operate the trash trucks – 32 of them.

Add in the pandemic, and the ranks are that much smaller, Jackson said.

Jackson said 28 employees were out sick and an additional 54 employees were absent on Aug. 25, the day he appeared before the committee. Employers who were sick with COVID-19 have been reviewed by human resources officials and their return-to-work date will be coordinated with the department. Those who are absent may be feeling not healthy, or may be out because they don’t want to risk exposure to the pandemic. 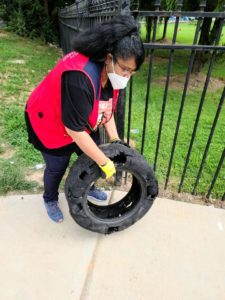 “Many are experiencing symptoms, or are asymptomatic, or are fearful of coming to work for fear of being in contact with people or coworkers who have come into contraction of the disease itself,” Jackson said.

In an attempt to protect employees’ health, the department is providing health screenings and personal protective equipment, Jackson said:

Boone used her time to talk with the commissioner during the meeting to thank him for the department’s work in the district she serves, in Southwest Atlanta. The compliment preceded the clean-up, which was a few days hence.

“You all have provided much-needed support,” Boone said. “So, thank you, on behalf of my council district and my NPUs.” 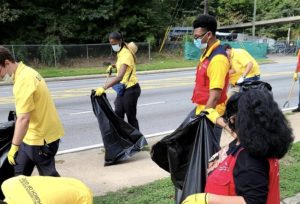 About 130 volunteers gathered Sunday to clean debris from Martin Luther King, Jr. Drive at a time Atlanta’s sanitation department is struggling to manage a staff shortage and employees who aren’t at work because of COVID-19. Photo provided by Andrea Boone