Monday, April 21, is the deadline to register to vote in the May 20 primary elections. 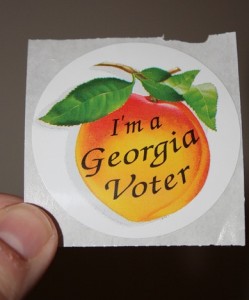 April 21 is the deadline to register to vote in the May 20 primary election and receive the “I’m a Georgia Voter” sticker.

The deadline for voter registration is much earlier than usual because the date of the primary election has been moved up from mid summer to May 20. The date of any needed runoff elections is July 22.

In aligning the date of state and local elections with a court-ordered date for federal elections, the legislature also changed deadlines for campaign financial disclosure reports, which are important to those who follow campaigns.

Voters can register on line through a website of the Georgia Secretary of State. The site also allows voters to check their status and confirm polling location, and view a sample ballot.

County offices of voter registration still handle paper registrations. Their websites typically link to the secretary of state’s office to download and print an application.

Georgia Secretary of State Brian Kemp issued a statement Monday reminding of the deadline on April 21:

“Every Georgia should have the opportunity to vote in the May 20th primary election. The new news is that it is easier than ever to get registered to vote or to change your registration information.”

Kemp’s office provides a site to register to vote.

The earlier elections dates stem from a lawsuit the U.S. Justice Department filed against Georgia regarding federal elections.

The lawsuit contended that overseas voters and military voters didn’t have time to cast absentee ballots in run-off elections that were held three weeks after the date of primary and general elections. The ruling ordered that ballots had to be postmarked at least 45 days before the elections.

Georgia lawmakers voted this year to align the date of state and local elections with the date of federal elections. State Rep. Joe Wilkinson (R-Atlanta) sponsored House Bill 310, which provided for a number of date changes that are significant for those who track political activities. The bill altered:

The timing of the bill’s passage is of note, particularly in light of the governor’s comment when he signed the bill.

The governor said in a statement released after Deal signed the bill: