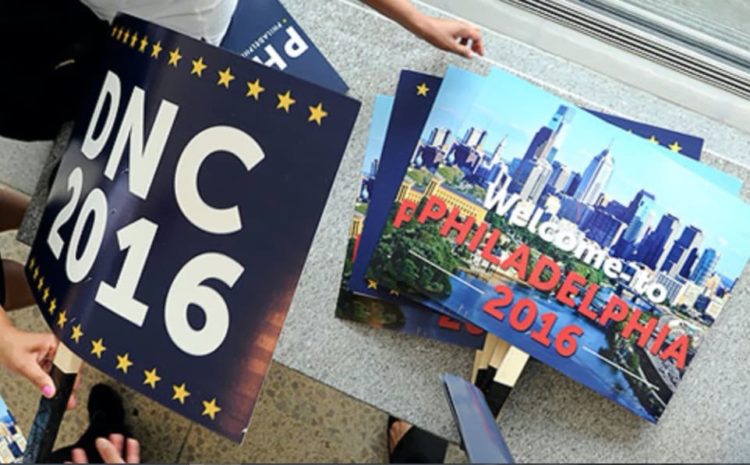 The Democratic Party is expected to name Hillary Clinton as its candidate in the 2016 presidential election. Credit: bccn1wp.wordpress.com

This was the night designed by the Democrats to make the case that Donald Trump is just a little too screwy to trust with the keys to the nation’s nuclear arsenal, and what better setup could there have been than Trump suggesting Russian intelligence might help bring Hillary Clinton’s missing emails to the surface?

We had in this a campaign micro-moment. It’s happened repeatedly. Trump says something that sounds utterly outrageous, a lot of official types voice their shock, Trump’s supporters are more delighted by the consternation he’s caused than worried by what he said, and he wins the news cycle.

The difference Wednesday was that the Democrats had a powerful battery of speakers, including former CIA director Leon Panetta, Vice President Joe Biden and former New York Mayor Michael Bloomberg, lined up to paint the Republican nominee as “a risky, reckless and radical choice,” in Bloomberg’s words, vice-presidential nominee Tim Kaine to imitate him, and Barack Obama, in what will be his farewell speech to the party as president, to bat cleanup.

“Let’s elect a sane, competent person,” Bloomberg, an independent who flirted with a presidential run, said. The message what that Trump falls short of those qualifications.

There were still hecklers protesting the Trans-Pacific Partnership in the middle of Obama’s speech, which means they will probably be there tomorrow night when Hillary Clinton gives her campaign acceptance speech. Unpredictable as the Republican National Convention was last week, the Democratic National Convention has come off on television as much bigger and more boisterous.

Obama, making the case for what matters most in this election, reached back to the Scots-Irish roots of his mother’s parents to talk about the values he sees as contrary to Trump’s. If his Charleston speech was this very complicated man’s most self-consciously black moment, maybe this was the most self-consciously white moment. It was a direct and very emotional appeal to those in the American heartland who might be most susceptible to the appeal of a “homegrown demagog” to remember “the true things, the things that last.”