Looking for something a little different to do this weekend? Check out Midtown’s Parliament of Owls Lantern Parade this Saturday, August 6. Anyone is welcome to walk the parade with a paper owl lantern — following the black and white theme — or just enjoy the show. Click here for more information about the upcoming lantern parade.

More than three months after a devastating hack, the State Bar of Georgia’s website still lacks one of its most useful features: details of attorneys’ misconduct sanctions.

The Atlanta-based State Bar is a quasi-governmental organization that supervises attorneys licensed to practice in Georgia. It is authorized by the Supreme Court of Georgia to conduct ethics investigations and sanctions, among other powers. A handy feature of the website for the general public is a directory of attorneys that previously included information about any sanctions against them.

On May 2, the State Bar announced that the website, as well as email and other internal networking, had gone down due to a hack. The State Bar has said it appears no “confidential, sensitive” information was compromised. It remains unclear who hacked the system and why. “No details on any criminal aspect of the matter have been shared with us,” said State Bar spokesperson Jennifer Mason this week.

The website took weeks to return from the hack. The restored version of the attorney directory still lists key information about a lawyer: whether they are active and in good standing, meaning they can practice law, or are inactive or have received the ultimate sanction of disbarment.

But still missing as a result of the hack are lesser disciplinary records that could be important for clients to know. And it’s the only function not yet restored, according to Mason. She said that information “will be restored,” without giving a timeline.

The Supreme Court of Georgia makes decisions on the public discipline of attorneys and publishes them among its other opinions, but those documents are not easily searchable by non-attorneys. For now, the State Bar advises people interested in disciplinary information to go the old-school route of calling its Office of the General Counsel at 404-527-8720.

The State Bar recently has been involved in high-profile investigations of attorneys involved in former President Trump’s attempts to overturn the 2020 election results. L. Lin Wood, a prominent libel attorney who promoted various election conspiracy theories, last year lost the first round of a legal challenge to the State Bar seeking a psychiatric evaluation of him regarding his suitability to practice law. Last month, the State Bar moved forward with complaint investigations on Brad Carver and Daryl Moody, two attorneys who served as “fake electors” for Trump in a move currently under criminal investigation by a Fulton County special grand jury.

All three of those attorneys remain listed in the State Bar directory as active members in good standing with no records of public discipline.

Under the new program, small business owners can apply for grants for up to $50,000 to fund physical upgrades to their businesses.

United Way of Greater Atlanta and Invest Atlanta partnered for this initiative as part of the Atlanta Open for Business Fund — made possible by a $20 million grant from Wells Fargo to fund facility improvements and help Atlanta’s small business owners purchase their business assets like property and equipment.

“Atlanta’s small businesses are the backbone of our economy and the primary job creators in our communities,” Mayor Andre Dickens wrote in a press release. “Providing funding assistance for capital improvements and the purchasing of assets affords small businesses the breathing room needed to grow, become more resilient and provide more hiring opportunities. The CPIG is not just an investment in our business community — it is an investment in our people.”

Small business owners who are interested should check out Invest Atlanta’s live webinar on August 9 from 8 a.m. to 6 p.m. Click here to register. Folks can also click here to learn more about the grant’s requirements and to apply. 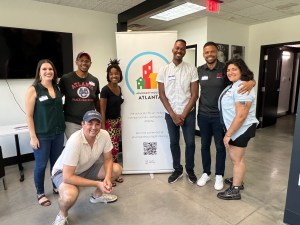 There’s a growing movement in Atlanta, and nationally, to welcome greater density and more residents.

The event included three members of the Atlanta City Council as well as Phil Olaleye, who is running unopposed for Georgia House District 9. At the meeting, Brown announced that the national organization — YIMBY Action — will be holding its national convention in Atlanta next spring.

Incidentally, Brown also serves on the board of YIMBY Action. YIMBY is an acronym for “Yes In My Back Yard,” or the opposite of “Not In My Back Yard (NIMBY). Abundant Housing Atlanta is a chapter of YIMBY Action, which has a national network in about 28 states and more than 32,000 people on its email list. Brown said the national organization is more than five years old. Another Atlantan also serves on the YIMBY Action board — Andrea Cervone, a former city councilperson with the City of Clarkston. 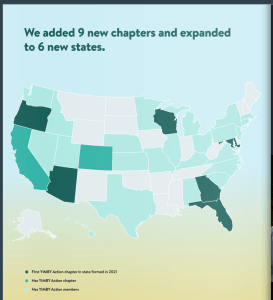 During the membership meeting, speakers spoke of how increasing density would improve housing affordability and create stronger communities. Atlanta City Councilmember Liliana Bakhtiari spoke about the relationship between the costs of housing and energy, saying those trends were causing displacement.

Atlanta City Councilmember Jason Dozier spoke of the need to have a community benefits agreement to make sure developers were responsive to the community’s best interests.

Jewish Federation of Greater Atlanta recently received a $73,000 grant from the Jewish Federations of North America to support Ukrainian refugees seeking safety in the Atlanta area.

In light of the Russian invasion of Ukraine, the U.S. is expected to see about 180,000 Ukrainians seeking shelter. The grant is part of a $1 million initiative from the Jewish Federations of North America to support Ukrainians who are resettling in the U.S., with half a million coming from the Federation and matching funds from a group of philanthropists led by the Shapiro Foundation and the Combined Jewish Philanthropies.

The funds will support “volunteer circles,” with local agencies partnering with volunteers to help refugees find housing, aid in the job search, enroll children in school and assist with paperwork and accessing benefits.

“The Jewish people have been refugees in so many countries, yet we have been blessed with freedom and protection in the United States,” Eric Fingerhut, president and CEO of Jewish Federations of North America, said in a press release. “Supporting refugees and vulnerable populations is a Jewish value and we see it as both our duty and privilege to lend a hand to our neighbors in need, regardless of their faith or background.” 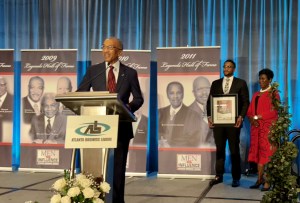 Longtime Atlanta business leader — Greg Baranco — into the Atlanta Business League’s 2022 Legends Hall of Fame on Aug. 2 at a reception/dinner at the Hyatt Regency Atlanta.

Baranco, co-owner, president and CEO of Mercedes-Benz of Buckhead, accepted the honor from Ryan Wilson, co-founder of the Gathering Spot who is also the ABL’s chair elect.

“We’ve got to change the circumstances in this city because too many people want to give our kids guns, long rifles and take away their right to vote,” Baranco said. “We have got to change that. We need to get involved with these kids and make sure they can achieve anything they want to achieve.”

Greg Baranco, and his wife and business partner, Juanita Baranco, have been devoted community leaders for decades. Greg described his wife as a “force of nature” when she cut through red tape to help her daughter, then working at Grady Hospital, adopt a newborn child at Grady who would have become a ward of the state. Now the 11-year-old grandson of the Barancos is thriving.

“In Atlanta, we are very, very fortunate to have abundance,” Baranco said. “But there are a lot of Atlantans who don’t see that sense of abundance. We have to be responsible for these folks.” 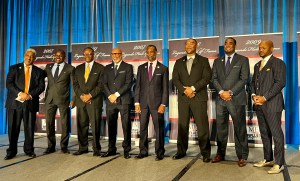 The honorary co-chairs of the evening were Lisa Smith of Georgia Power, Myrna White of Hartsfield Jackson International Airport and Monique Richard of Southwest Airlines who was unable to attend, according to Leona Barr-Davenport, president and CEO of the Atlanta Business League. 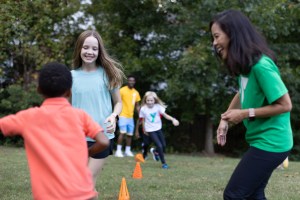 As children and families all around the metro area are gearing up for the upcoming school year, so are the folks at the YMCA of Metro Atlanta. On Aug. 1, the team opened enrollment for its afterschool program for the 2022/23 school year.

“Through our afterschool curriculum, we encourage children to develop their talents and build confidence,” President and CEO Lauren Koontz said in a press release. “We know safety is top of mind for parents now more than ever and we remain committed to providing a safe, supportive and fun environment for positive interaction and exciting activities.”

The organization is also hiring for part-time afterschool positions like site directors, counselors and bus drivers.

Click here to learn more about the YMCA afterschool program or to register a child. 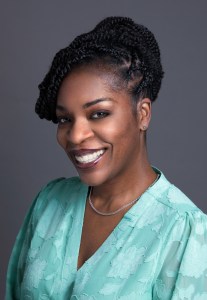 Following a nationwide search, East Lake Foundation’s Board of Directors has named Ilham Askia as the nonprofit’s next President and CEO. She will step into her new role on Sept. 1.

The East Lake Foundation is a local nonprofit that focuses on revitalizing and improving the East Lake area.

Askia will help guide the organization through its efforts to increase the health and well-being of residents, prioritize racial equity and help create pathways to prosperity for residents.

An experienced leader of 18 years, Askia most recently served as executive director of Gideon’s Promise, a nonprofit public defender organization that aims to transform the criminal justice system by creating a system of public defenders who serve marginalized communities.

Catherine Woodling has served as the organization’s interim CEO and president since February. Once Askia steps into that role in September, Woodling will be named chief operating officer.

Goodwill North Georgia welcomes newest members to its board

Goodwill of North Georgia — recently recognized as the top Goodwill in the nation for helping folks find jobs — has appointed two new board members and five new board officers for the 2023 fiscal year.

The new board members, elected for three-year terms, include:

President and CEO Keith Parker also welcomed the following board officers, who will join for the 2023 fiscal year: