In July 1996, all eyes were on Atlanta. Twenty-six years ago, the city held the 1996 Olympics, hosting 10,000 athletes from 197 countries to compete in 271 events. The games attracted two million visitors with $5.14 billion going to the local economy. Centennial Olympic Park in downtown still serves as an homage to the 1996 Games. 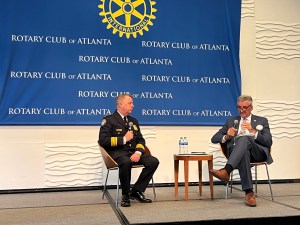 We as a society must learn how to better resolve conflicts in our lives.

That was one of the messages that Darin Schierbaum, Atlanta’s interim police chief, shared with the Rotary Club of Atlanta on July 18.

Schierbaum shared an example of a recent shooting at an Atlanta sandwich store where an employee was shot and killed for using too much mayonnaise.

“That’s what is motivating homicides — escalating disputes,” Schierbaum said, adding that we have to learn to “walk away” from conflict. “That’s what driving homicides.”

Schierbaum spoke about all the challenges and opportunities that he faces in running the state’s largest law enforcement agency. As police chief, he is working to rebuild morale among the ranks, which hit a low in 2020 during the double whammy of the Coronavirus and racial unrest.

“In 2020, we saw a lot of people leave the profession,” he said, noting the importance of pay and due process for officers in the department.

Meanwhile, APD has been recognized as a model department among the nation’s 18,000 law enforcement agencies. It is one of 16 out of the 18,000 recognized as “best in class for 21st Century policing,” Schierbaum said.

Part of that is the extensive training officers must have to work in Atlanta. That training includes going through a partnership with the National Center of Civil and Human Rights to better learn about race, equity and conflict resolution.

“All our officers learn about the injustices that have been done. We are a department in the state of reform,” Schierbaum said. “We are one of the few majority-minority police forces in the United States. Your officers must reflect the community. We have the highest number of police officers living in the city.”

He later mentioned that only 20 percent of Atlanta’s police officers live in the city. The department is working with the Atlanta Police Foundation to increase that number.

Schierbaum said the department is training all of its investigators to be “gang investigators.” It also is wanting officers to be closer to the communities that they patrol.

“We could not have a strong partner than Sheriff Labat,” said Schierbaum, reflecting a closer relationship between the city and the county. That said, Schierbaum added that one of the biggest challenges his department faces when trying to combat crime is the judicial system.

“We are arresting very dangerous individuals only for them to be released a week or two weeks later,” he said.

In response to a question, Schierbaum said the majority of crime in Atlanta is Black-on-Black crime. That is the by-product of a lack of opportunities for economic, employment and education in certain parts of the city.

But Schierbaum, who lives in Midtown, noted that there’s been improvement.

“In 2003, in my neighborhood, cars would be lined up to pick up prostitutes,” he said. “Now that area has been cleaned up.” 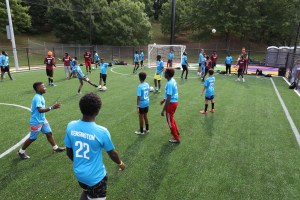 The inaugural game at MARTA’s Kensington station on July 16. (Photo courtesy of MARTA.)

Last weekend, the Kensington MARTA station officially debuted as the fifth SoccerStation location in Atlanta. StationSoccer is a citywide initiative by Soccer in the Streets to craft a network of soccer fields connected by MARTA to offer a league that’s affordable and easily accessible by public transportation.

StationSoccer kicked off at the Five Points Station in 2016 as the first soccer field in the world built inside a transit station. The program has since expanded to include five stations around Atlanta — West End, East Point and Lindbergh — with the goal of eventually forming a ten-station league.

The Kensington Station now boasts two soccer pitches and will also include community gardens and a mural by artist Kevin Bongang.

“Soccer in the Streets is excited to open this new location and expand our vision to grow the game across the transit network,” Chairman Brian O’Neill said in a press release. “As StationSoccer grows, we will continue to provide much-needed access to the game of soccer and also provide youth with new ways to thrive both on and off the field.”

Click here for more information on Soccer in the Streets.

A biography of the famed leftist historian Howard Zinn, who once taught at Atlanta’s Spelman College, is in the works and its author is seeking contributions from local sources.

In the 1950s and ’60s, Zinn was a professor and department chair at Spelman, where he got involved in the Civil Rights Movement and taught such students as the famed author Alice Walker. During that period, he wrote two books about racism and Civil Rights organizing: “The Southern Mystique” and “SNCC: The New Abolitionists.”

Zinn was fired in 1963, reputedly for his Civil Rights activism, and became a professor at Boston University in Massachusetts. In 2005, he returned to Spelman to give the commencement address and receive an honorary degree.

The new Zinn biography was announced on July 20 by Dave Zirin, a journalist who writes about the intersection of sports and politics. Zirin is sports editor for The Nation and writes the blog Edge of Sports. His books include the Zinn-inspired A People’s History of Sports in the United States.

Zirin announced the biography on Twitter, saying it “won’t be a hagiography” but will take an activist approach. He described it as a two-year book project.

“No secret that Howard was a friend, a mentor, a teacher, and a deep influence on how I see the world,” Zirin wrote. “But this won’t be just about the past. It will [be] about why Trump and legions of his minions still attack his work and why his ideas are critical for a new generation of fighters.”

Zirin said he is seeking “any stories about meeting or working with Howard,” especially from people willing to be interviewed. He can be reached by direct message through his Twitter account at @EdgeofSports. 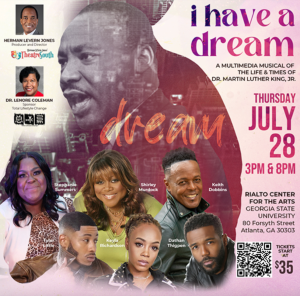 (Credit: The Rialto Center for the Arts)

Musical about Dr. King give conversations about Black/Jewish relationships

On July 28, the broadway gospel musical, “I Have A Dream” will feature a multimedia production that chronicles the major events of Dr. Martin Luther King, Jr at the Rialto Center for the Arts with two showings.

The musical, which debuted starring actor Billy Dee Williams in 1976, will include music, singing, dancing and more with over 125 historical images from the Civil Rights Movement.

Pre-show conversations will discuss the relationship between the African American and Jewish communities.

Region four of the U.S. Environmental Protection Agency (EPA) along with the City of East Point are partnering to host workforce development classes that will teach students how to work in the environmental remediation field and assist with local economic development.

“This is a great way to expose our young adults to careers in the environmental field to improve the quality of life for our community,” said Deana Holiday Ingraham, mayor of East Point.

Applicants must be self-motivated, driven and have a willingness to learn. They must be at least 17 years old and able to pass a drug test.

Applications are being accepted until Aug. 1, and classes will take place from Aug. 14 to Nov. 14. For more information visit the City of East Point’s website.

In Erskine’s new role, she will lead the investment in new systems to enhance the Food Bank’s client service model, measure and report their impact, and increase operations efficiency. With more than 20 years of experience in information technology, Erskine most recently served as Vice President of IT at Bunzl Distribution, NA in Atlanta.

In Hill’s role as chief supply chain officer, he will lead food sourcing, inventory management and delivery operations. Before joining the team, Hill spent 30 years in various leadership roles with The Home Depot.

“As we look to the future of the organization, particularly post-pandemic, we determined that two areas of expertise were immediately critical to resourcing our mission, supply chain operations and information technology,” President and CEO Kyle Waide said in a press release. “We are pleased to announce that we have completed our extensive search to bring two new leaders into the Food Bank. Sharay and Kenny bring experience, fresh perspectives, and new capabilities to their respective roles and will be integral as we look to grow our programs and services to meet the increased demands of need.”

The Atlanta Community Food Bank is an Atlanta-based nonprofit that works to end hunger in 29 metro Atlanta and North Georgia counties. Through more than 700 nonprofit partners, the Food Bank reaches over 715,00 people each year. 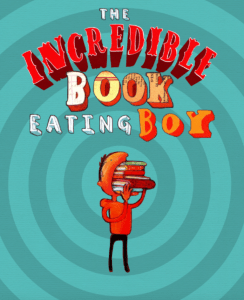 To provide more opportunities for sensory-sensitive audiences, the Alliance Theatre will hold two special events of the world-premiere musical showing of “The Incredible Book Eating Boy.”

On Saturday, July 24 at 10 a.m., the theatre will hold a Meet Your Seat experience which will have crew members and technicians show examples of loud or bright technical elements from the production, giving families a chance to make a plan for self-regulation at the time they see the show.

Relaxed performance on Friday, Aug. 5 at 5 p.m. will show modifications of the performance including reduced volume of loud noises and effects, elimination of strobe lights and heightened lighting in the auditorium, adaptation for specific movements or lines and a relaxed attitude toward sound and movement in the audience.

On Saturday, July 23, the Atlanta Police Department is hosting a recruitment event at Lenox Square to find “dedicated, community-minded individuals” to join the team.

Folks who are interested should submit an online application before the job fair, and come ready to interview. To participate, you must bring a valid driver’s license.

The check-in table will be on Lenox Square’s Mall Level outside Bloomingdales, running from 10 a.m. to 2 p.m. Click here for additional information about the upcoming job fair.