On this weekend in 1960, the Atlanta Motor Speedway opened its doors for the first time. About 25,000 visitors attended the opening race, and after 62 years, the 1.5-mile track is one of the most popular raceways in the country. Legendary racer Dale Earnhardt holds the track record with nine victories under his belt. Former President Jimmy Carter even worked there as a ticket taker before his days in the White House.

On to other news from around the city:

A June 12 snapshot of weekend-stay listings from market leader Airbnb showed 94 properties in Dunwoody, where all such rentals are completely banned. And Sandy Springs had 164 listings, but only 15 properties were properly registered and licensed under its system.

Brookhaven also has a registration and licensing system. Airbnb offered 140 listings in that city, while data obtained through an open records request shows only 58 registrations covering 48 distinct addresses.

In the past 12 months, the City’s code enforcement team investigated 20 complaints of short-term rentals operating without a license at 14 distinct properties.

While much short-term rental policymaking focuses on impacts in neighborhoods of single-family homes, SaportaReport analyses have found that many metro listings are in apartments. Brookhaven added to that pattern. The vast majority of legally registered short-term rental properties there are single-family homes. But the majority of investigations for violations — 65 percent — targeted units in apartment complexes.

Brookhaven once banned short-term rentals, but legalized them in 2019, when the father of Airbnb co-founder Joe Gebbia Jr. sat on the City Council. Gebbia Sr. recused himself from short-term rental votes.

The City of Atlanta this year launched a registration and licensing system similar to those in Brookhaven and Sandy Springs, but has delayed its enforcement amid legal questions. 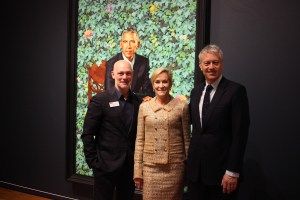 The results are in. The Woodruff Arts Center’s 2021/2022 corporate campaign received a significant boost because of the leadership of James Quincey, chairman and CEO of the Coca-Cola Co.

In all, Woodruff was able to raise $16.5 million in commitments and pledges from the top corporations in Atlanta.

“Having James Quincey as campaign chair absolutely without a doubt increased the stature of this campaign,” said Hala Moddelmog, president and CEO of the Woodruff Arts Center, which includes the Alliance Theatre, the Atlanta Symphony Orchestra and the High Museum of Art.

Moddelmog said Quincey hosted a special reception for about 125 executives on President’s Day in celebration of the Obama portraits exhibition at the High Museum. He also had an exclusive dinner with about a dozen top CEOs urging them to increase their support for one of the largest cultural centers in the United States.

The campaign also had a new twist this year. It sought three-year commitments from key donors, which placed several companies in the prestigious $1 Million Circle.

“Of the $16.5 million we raised, about $5 million is designated for the future year,” said Moddelmog, using UPS as an example. Historically, UPS has donated about $330,000 a year. But this year, UPS made a $1 million commitment over three years.

“We think that’s a lot wiser and provides a lot more stability,” Moddelmog said. “We have these incredible executives in Atlanta, but they also are incredibly busy. This way we don’t spend time pitching to them every year.”

In addition, there were a host of companies that upped their giving and are now in the million-dollar league.

“There were three companies I can think of that were not close to that kind of commitment. Novelis, Graphic Packaging and Accenture,” Moddelmog said. “We also did pull in several new companies.”

Several other Atlanta-based corporations committed to funding initiatives through 2025 and beyond, including Chick-fil-A and WestRock. In addition, Cox Enterprises, Delta Air Lines, the Georgia Power Foundation and the Home Depot Foundation continued to be steadfast in their support.

“We are designating for this year $11.4 million to the Center,” Moddelmog said. “We are thrilled because it is still a Covid year.”

With the success of this year’s campaign plus the multi-year support, Moddelmog said the generosity of Atlanta’s corporate players will “provide the people of Atlanta meaningful cultural experiences at a time when it was needed the most.”

Now the Arts Center is beginning its fundraising efforts for the 2022/2023 season. The new chair of the corporate campaign will be announced in September.

The Georgia Tech Supply Chain and Logistics Institute recently announced the expansion of its Logistics Education and Pathways (LEAP) program with the Georgia Department of Juvenile Justice Reentry Program.

In addition to job preparedness, the certification program aims to help reduce recidivism — which sits around 50 percent in Georgia — and give participants the tools and training they need for a successful life.

“There will always be that student in the corner who you think couldn’t care less, but given the proper attention and care, they can become a star,” Project Director and Instructor Charles Easley Jr. wrote in a press release. “It’s easy to predetermine what someone is capable of doing, but when these students take this program, the lightbulb goes off, and they become interested and develop a passion and confidence because of this course.”

With this new project, ten bus stops around the metro area will have poems stenciled onto the concrete, only to be revealed by the rain.

“We are excited to feature the work of so many talented poets and think this is such a unique way to celebrate their words,” Art in Transit Director Katherine Dirga wrote in a press release. “It may be the only time you hope it rains as you’re waiting for the bus, under the shelter of course!”

Rinse & Repeat will debut this Sunday, July 31, with a live poetry reading from participating poets and curator Ahmariah Jackson, known as ANON The Griot. The opening celebration is from 12 p.m. to 2 p.m. at the West End Station. 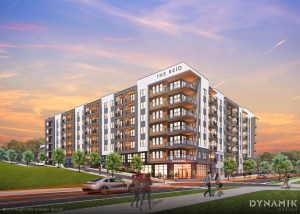 A conceptual illustration of the proposed apartment building at 952 Memorial Drive. (Image by Toro Development Company.)

The Memorial Drive redevelopment frenzy continues with the announcement of “The Reid,” an apartment building that would replace a former body shop in Reynoldstown.

Reid’s Body Shop occupied the lot at 952 Memorial, at the Holtzclaw Street intersection, for decades. Toro Development Company says its 186-unit building’s name is a tip of the hat to that longtime use.

Toro expects construction to start early next year and an opening in the third quarter of 2024, but first the City must review a request for a special administrative permit.

The project site sits about a block east of the Atlanta BeltLine, which puts it in a zoning overlay that requires either the inclusion of some affordably priced units or a payout to a fund for creating them. Toro says it would meet the requirement by making 15 percent of the units affordable to households earning 80 percent of the area median income. The rental rates for that income bracket currently used by Invest Atlanta, the City’s development authority, are in the range of $1,350 to $1,736 a month.

The property is in a very hot spot for real estate. Besides proximity to the BeltLine, it’s next door to the popular diner Home Grown and across the street from the Madison Yards mixed-use mega-complex that includes a grocery store and movie theater.

Toro is a new company created by Mark Toro and several other veterans of the developer North American Properties, where they worked on such high-profile projects as Atlantic Station, Midtown’s Colony Square makeover, and Alpharetta’s Avalon mixed-use complex.

Robert Reid, a member of the family that ran the body shop and is selling the land to Toro, praised the project in a press release.

“We were honored to learn the project would be called ‘The Reid,’” said Reid. “Our family has been an active part of the community for a long time, and we are glad the new owners care about the history of the property. We are excited to see this become a great new place for people to live.” 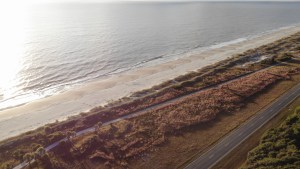 Georgia Audubon, an Atlanta-based environmental organization, recently secured a grant from the Robert F. Schumann Foundation to expand its bird-friendly habitat restoration work on Jekyll Island. The funding will allow the nonprofit to restore three additional acres of maritime grassland dune habitat, which has native plants that support local and migratory birds.

Restoration of seven acres is already underway and, with the additional funding, the conservation efforts will span 10 acres. Georgia Audubon is partnering with Jekyll Island Authority, UGA Marine Extension & Sea Grant Program and Coastal Georgia Audubon Society on this initiative.

With the help of partners, the team is removing non-native plants and reinforcing dune areas to make the habitats more resilient and fruitful for their inhabitants. The team also plans to plant roughly 48,000 native coastal grass and perennial plugs along the additional three acres. 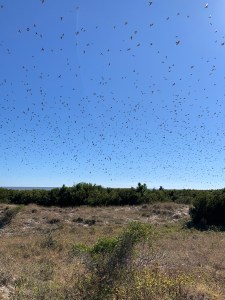 Tree Swallows flit through the sky. (Photo by Gabe Andrle.)

“Georgia Audubon is excited to expand our habitat restoration work on Jekyll Island thanks to this generous grant from the Robert F. Schumann Foundation,” Georgia Audubon Director of Conservation Adam Betuel said in a press release. “This project builds on successful past and ongoing restoration work with the Jekyll Island Authority and deepens our ongoing partnership enabling us to build more ecologically productive space in a threatened habitat that experiences high levels of public visitation.”

Individual grants of $10,000 will be provided to businesses negatively impacted by the COVID-19 pandemic who meet all criteria, including having a current county business license and less than 200 employees.

Grants are given on a first-come, first-served basis until all funds have been exhausted. 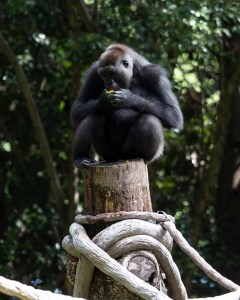 Gorilla father/son duo celebrate their birthdays at the Zoo

Over the weekend, Western lowland gorilla Taz and his son Floyd celebrated their 33rd and third birthdays, which are only four days apart. Taz, Floyd and their other family members at Zoo Atlanta enjoyed their birthday treats, including piles of wood wool — one of Floyd’s favorite toys — and popsicles made with frozen juice and fruit.

Floyd is the youngest gorilla at the Zoo’s Ford African Rain Forest. Apart from the birthday boys, the troop — led by Taz — includes seven other gorillas, and is one of four gorilla social groups at the Zoo. 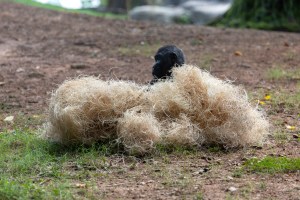 Western lowland gorillas are critically endangered due to habitat loss, poaching, illegal hunting and diseases. According to the International Union for the Conservation of Nature, these combined threats have cut wild populations by 60 percent over 25 years. 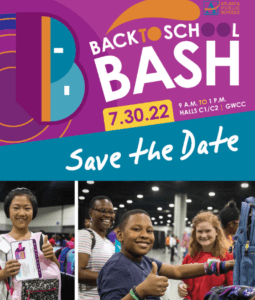 (Courtesy of the Atlanta Public Schools.)

APS back-to-school bash is back in-person

Atlanta Public Schools’ annual back-to-school bash will be in person after a two-year absence.

The pandemic forced the school system to host a drive-thru event in 2020 and 2021, but this year the bash will be back in-person. Free backpacks filled with school supplies will be given out as well as opportunities for vaccinations, COVID-19 at-home testing kits and other resources.

The bash will take place at the Georgia World Congress Center on Sat. July 30 from 9 a.m. to 1 p.m. and is open to all APS students and their families.

Click here to pre-register by Thurs. July 28, and onsite registration will be available the day of the bash.

The Boys & Girls Clubs of Metro Atlanta has named 12 new members to its board of directors.

The organization is the Chamblee-based metro chapter of the Atlanta-headquartered, nationally operating Boys & Girls Clubs of America, which provides after-school, mentoring and other programs to support children.

The new board members include the following. For a complete list, see the Metro Atlanta chapter’s website.