Happy Thanksgiving, Atlanta! Thank you for being part of our SaportaReport community. Our team sends warm wishes this holiday season.

On to local news from the week: 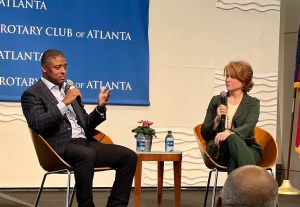 Warrick Dunn opens up about his life in a conversation with Stephanie Blank at Nov. 21 Atlanta Rotary meeting. (Photo by Maria Saporta.)

Warrick Dunn opens up about his journey at Atlanta Rotary

At 18, Warrick Dunn became the head of his household with five younger siblings when his mother, a police officer, was killed while working as a security guard.

Dunn, a former Atlanta Falcons star, and now part owner of the football team, has since spent much of his life helping single-parent households get a “home for the holidays.”

Warrick Dunn Charities celebrated its 25th anniversary on Nov. 22 – so far the organization has provided a total of 206 homes to families across 16 states.

“We try to support families more holistically,” said Dunn about the multiple challenges lower-income families face. “We want to teach financial responsibility early on in life.”

Because Dunn had to become an adult and head of household overnight, he never focused on his own personal pain and struggles. 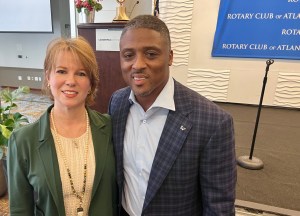 A decade after his mother died, Dunn was inspired by a fellow football player who openly said he was in therapy, and he asked if he could help him find a counselor.

“There was a negative perception [of being in therapy.] I had to be strong and tough – being a Black man and a football player,” Dunn said in a conversation with Stephanie Blank, 2022/23 president of the Rotary Club of Atlanta. Blank first met Dunn in 2002 during a lunch to recruit him to play for the Falcons.

After arranging to sneak in through a back door for his first therapy session, Dunn said he cried for 45 minutes straight. That began his journey to make peace with what had happened to him.

Dunn said he went to see the person who was convicted of killing his mom at a prison in Louisiana, who denied he had killed Dunn’s mom. 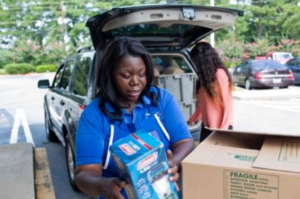 Goodwill calls for donations ahead of holiday season

If you’re looking to clear out some space before the holiday season, consider donating clothes and home goods to your local Goodwill. Giving your unwanted, gently used, items helps divert waste from landfills while also helping your neighbors find work.

Goodwill’s stores fund its Career Centers and, according to the organization, one bag of donations equates to about an hour of job training.

For the last three years, Goodwill of North Georgia has been recognized as the top in the nation for connecting people to jobs. In 2021, the local Goodwill helped over 16,000 North Georgians find meaningful work and diverted over 43 million pounds from Georgia’s landfills.

“At the core of what we do, we are focused on connecting people with skills and work,” wrote Elaine Armstrong, vice president of marketing. “This is possible due to the generosity of our donors. Without your contributions, we could not provide job training resources to job seekers across North Georgia.”

The Governor’s Office and the Georgia State Properties Commission (SPC) are involved in internal discussions about whether to save or demolish three historic buildings at Milledgeville’s Central State Hospital, according to the state agency in charge of them.

The Georgia Department of Behavioral Health and Developmental Disabilities (DBHDD) is conducting asbestos abatement work on the buildings as part of a still-unauthorized demolition proposal, as SaportaReport previously revealed.

The start of the work last month stirred fears among preservationists of pending demolition and calls for public input. DBHDD previously characterized the abatement work as an urgent response to trespasser-related safety issues and separate from any potential demolition or other long-term plans. But SaportaReport obtained contractor proposals showing the historic Green (1947), Jones (late 1920s) and Walker (1884) buildings pegged for demolition and the abatement as related to that plan.

DBHDD then said that teardowns are under “consideration” but not fully funded, authorized or even decided upon.

An executive order from the governor is required for the demolition of any state-owned building. 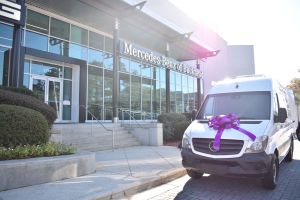 Last week, Atlanta Volunteer Lawyers Foundation (AVLF) received a Mercedes Sprinter Van Thursday from Mercedes-Benz of Buckhead, which will be used as a mobile response unit designed to serve survivors of domestic violence. The van was outfitted by Live More Campervans to meet these needs.

The nonprofit was founded in 1979 and provides free legal services from professionals for those facing domestic violence, eviction and other situations needing legal support. Each year, AVLF offers legal assistance to over 5,000 residents experiencing intimate partner abuse.

With the new van, lawyers, social workers and program experts can quickly reach residents in need, allowing them to provide immediate assistance. The van features a self-sustained large battery system and solar panels, along with technology that allows remote communication with the Fulton County Court for hearings.

“Too many people endure unsafe situations because they don’t have the financial means, the transportation, or the support systems needed to secure protection,” Executive Director Michael Lucas wrote in a press release. “We are humbled to receive this generous donation from Mercedes-Benz of Buckhead and Live More Campervans because it will allow us to quickly reach people in crisis who wouldn’t otherwise make it to the Courthouse, improving the outcomes for individuals and families.”

On Monday, Nov. 21, Cobb Community Foundation (CCF) announced $105,000 in grants to support small to mid-sized nonprofit charitable organizations in the county. The investment comes from the Cobb Unrestricted Community Fund.

In the inaugural year of CCF’s Thrive Grant program, the organization selected 14 local nonprofits to receive financial support, with $7,500 going to each group. With a total of 40 qualifying applicants, 26 organizations did not receive a grant but are still listed on CCF’s website to help garner other support.

“There were more deserving organizations than we had funds to award but we’ve made it easy for others to support them,” President and CEO Shari Martin said in a press release.