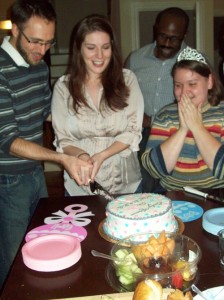 Sylvain and Becky LeHoux celebrate a parenting milestone—finding out the gender of their baby, due in April—at the weekly potluck hosted by Owen Mathews. He started the dinners as a way of making friends, and the group has turned into an extended family.

At last week’s potluck dinner hosted by Owen Mathews, a nervous Becky Lehoux, due to give birth in April, clasped her husband Sylvain’s hand and the cake knife as they cut into a special dessert. Inside would reveal whether their baby was a boy or girl.

Surrounding them, 15 friends wore toy tiaras or fake mustaches, signifying what each believed the baby’s gender would be. Mathews wore a tiara. He wasn’t related to the Lehouxes, but without him, they wouldn’t have had this family-like group of friends to celebrate this important moment in their lives as parents

The potluck is a weekly dinner the Lehouxes and assorted friends have attended weekly for nearly four years, usually at Mathews’ studio apartment in Midtown. Known informally as simply the “Potluck Dinner,” it serves as a reminder that the bonds of family and friendship can be created through the sacrament of a regular shared mealtime. It doesn’t have to be as seldom or momentous as the big Thanksgiving event many of us will travel thousands of miles to celebrate this Thursday.

This weekly Potluck Dinner group has grown into a broad range of young to early-middle aged professionals of assorted ethnic backgrounds and experiences. Every week, anywhere from eight to 20 of them cram into Mathews’ small apartment. 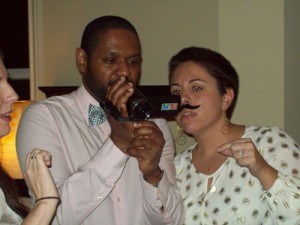 Jean-Philippe Gourdine and Sara Le Meitour are a couple who regularly attend the Potluck Dinner and are engaged.

An appetite for friendship

Mathews, a 40-year-old computer software engineer and instructor, said the dinner club gatherings grew out of a need to add something that was lacking in his life. Mathews said he first recognized that void when he finished a stint in the Peace Corps in west Africa in 2002.

“I didn’t feel heartbroken or sad about leaving anybody behind,” he said. “I just didn’t feel super connected to anyone and I didn’t think that was a good thing.”

After Mathews suffered a “really rough breakup” in fall 2009, his sense of isolation became more than just a nagging concern. He  realized he had few really close friends of his own.

“I noticed I’d been piggybacking on my girlfriend with her friends. I decided this had to change,” Mathews said.

Mathews had a recipe to follow. He had enjoyed and missed the potlucks he had attended with his ex-girlfriend and her friends. He decided that to be sustainable, his potluck dinners would have to be regular weekly events. Monthly potlucks wouldn’t last.

For his first dinner, Mathews invited all of his Atlanta friends on Facebook, roughly 100 people. It was a bit of bust. The four who showed were his sister Ryll, a woman he had started dating, one other person, and himself.

Bring on the masala 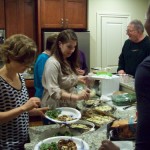 The serving line at the Nov. 22 Potluck Dinner.

Mathews didn’t give up. He thought of that first party as a “small start” instead of a failure. He bought the cookbook, “1000 Indian Recipes,” to bring something new to the table every week.

He invited a fellow dog walker he had met one snow day. Another guest he met at a wine tasting for former Peace Corps volunteers.

“It’s almost like we have family dinner once a week,” said Le Meitour.

Mathews evolved into a hub for a thriving circle of friends. They counted on his Indian entrees, especially his wicked palak paneer. Those who’d dubbed him “patron saint of the potluck,” gave him a T-shirt that reads, “St. Owen.” Gourdine asked him to be his best man.

Potluck dinners, of course, always carry an element of surprise. Mathews’ took that to a higher level. At one, a New York-bound opera singer sang arias for 17 people. Many agreed that the Lehouxes’ surprise might the topper of them all. 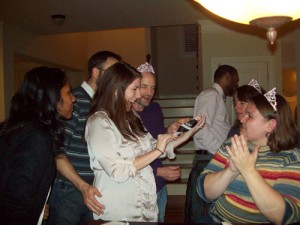 This dinner, on Friday Nov. 22, relocated to the more spacious west Atlanta home of Perrin Quarshie, who is a nuclear engineer. In another diversion from potluck dinner tradition, Mathews served chicken enchiladas with a mole sauce and sticky rice instead of Indian food for dinner.

Then came the moment they had gathered for: the suspenseful, creative baby announcement.

The Lehouxes had asked their obstetrician to seal the news of the baby’s gender in an envelope, which they delivered to the baker. Inside the cake was either pink or blue icing.

Surrounding them were friends they considered like an extended family. “Something small and simple, with a mix of good friends and Becky’s parents,” was how Sylvain Lehoux described the intimate audience for breaking baby news.

What more proof did Mathews need that his quest for friendships had succeeded? “I was really excited for them and touched that they asked,” he said. “I feel really honored to be a part of their lives like that.”

Mathews’ gut feeling about potlucks was right, that food is a powerful connector for families and friends. His instinct about the Lehoux baby was spot on too.

When the knife came out of the cake, the icing was pink.

Previous Article
A new Braves stadium in Cobb County shows metro Atlanta still doesn’t understand the concept of regionalism
Next Article
Sustainable packaging: The food container is just as important as the edible contents it transports