What, me worry? New losses in the long decline of the Empire of Paper 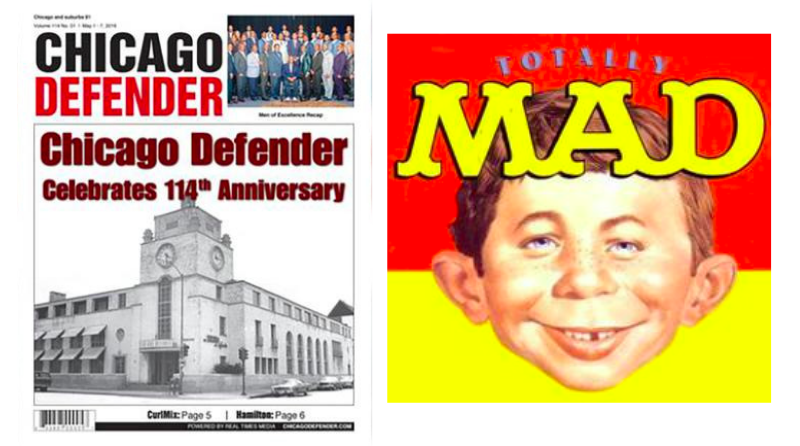 The Chicago Defender is completely digital as of July 11, 2019. Mad Magazine will stop publishing new material.

What with the departure of Mad Magazine and the Chicago Defender, this has been a depressing passage in the long decline and fall of the Empire of Paper. The loss of any publication represents the loss of a voice, and in their separate ways, Mad and the Defender were unique and distinctive American voices.

The Defender is going online and the back issues of Mad are being repackaged for the specialty market, which means those voices won’t disappear entirely. It’s always important to remember, when speaking of these hard times in print media, that it’s paper, specifically, which has come into hard times. Much of what was on paper can now be accessed through other means. Starbucks announced last week that it will no longer sell newspapers at any of its stores, but we can still expect to see their customers bent over their various devices, reading something from somewhere.

But more than 1,800 local newspapers have closed or merged over the past 15 years, according to a study by the University of North Carolina, and for many of these paper products, no digital replacement has emerged. Along with the opportunity gap and the prosperity gap, a widening information gap is emerging.

You can read what Trump just tweeted just about anywhere in the United States. But the medium through which people used to find out their neighbor down the street had died, or that a public hearing had been scheduled about the new street plan, is withering away. That’s one reason rural broadband is an important issue, because without it, there’s little left in much of America but a few radio stations and word of mouth.

This has a measurable impact on the communities where the local paper disappears. Economists at the University of Illinois have found that in counties which have lost their newspaper, the cost of borrowing for local government projects has gone up. County government wages, and the number of county government jobs, have also increased in these areas. That should come as no surprise. When no one’s watching and writing about local government its sure to become more costly.

At a higher level, where national publications have managed to position themselves with both print and digital footprints, the picture isn’t nearly as bleak. But the network of information on which the national media depends hangs by a thinner thread.

The Miami Herald’s series on Jeffrey Epstein and the questions lingering around his light treatment for sex crimes involving under-aged women has resulted in his re-arrest, the resignation of a cabinet secretary and the subsequent revelation that Epstein probably isn’t a billionaire, after all. The story has produced all kinds of content for the national media to feast on, but it’s worth noting that the Herald reporters who produced the series  traveled on the cheap and occasionally dipped into their own pockets to cover expenses, buying time to get their work done.

There’s something inspiring about that, but something sobering as well. Regional newspapers have for a long time served as a feeder system, for journalistic talent as well as scoops, and when reporters have to start paying their own way, the feeder system is going to get a lot thinner. The evening news on television has become increasingly dependent on cell-phone videos volunteered by the public; that’s harder to pull off in print.

Back in the 1980s, when the combined daily circulation of U.S. newspapers was over 60 million, bean counter-visionaries used to fret that younger Americans were spending more of their time watching television, and were becoming less wedded to the printed word. Instead the printed word made the leap to a new format, and those younger readers went with it.

Today the nation’s combined daily circulation is less than 29 million, and dropping at a perilous rate.  Paper, which requires increasingly expensive wood and ink, and the gas to deliver the finished project to its destination, was headed for trouble anyway. But paper is more tangible than a network connection, and it can’t be turned off with the flick of a switch. We live in an age when information about the most obscure subjects is at our fingertips, quite often with an instructional YouTube video. Are we headed for a time when we can know more about what happened 50 years ago than what happened last week?

Previous Article
Taggers as a focus group: PATH400 to place art in areas street artists have found, decorated
Next Article
Financial Uncertainty in the Face of a Natural Disaster