Georgia’s port in Brunswick is benefiting from a rise in the export of Georgia-grown wheat to Mexico, and the first vessel of the season sailed from Brunswick Thursday. 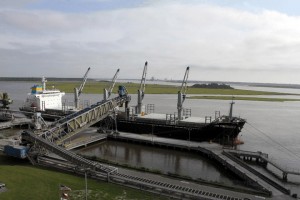 The bulk carrier CMB Weihai left the port of Brunswick Thursday. The vessel is flagged out of Hong Kong and took on 33 tons of wheat, some of it Georgia grown and destined for Mexico. Credit: Georgia Ports Authority

Georgia farmers have bet heavily on wheat this year. The acreage committed to wheat production rose by 52 percent this year compared to 2012, from 230,000 acres to 350,000 acres, according to the Georgia Ports Authority, citing figures from the U.S. Department of Agriculture.

The idea that Atlanta has an interest in Georgia’s wheat exports through a state port is fueled in part by Mayor Kasim Reed. Reed has linked Atlanta’s stature as a global logistics hub with a seaport capable of handling the world’s largest cargo vessels. To that end, Reed is working diligently to obtain federal support for the deepening of the Savannah harbor.

Wheat is a complex global commodity. The short version of the situation of the rising amount of export through Brunswick seems to have two components:

The Brunswick port expects to move from 90,000 to 100,000 tons of wheat this season. Most of it was produced in Georgia and the remainder arrived from Florida, Alabama and South Carolina.

To put that amount of wheat into context, the wheat export for the entire nation historically exceeds 20 million metric tons, according to figures from the Minnesota Department of Agriculture.

In terms of profits, Georgia’s increase of production per acre of wheat may have helped offset the lag in prices.

There was no mention of pricing of Georgia wheat in the statement from the ports. Price is a function of aspects including protein content and weight per bushel, and that information was not evident on the Georgia Department of Agriculture’s website.

The increased volume of wheat being shipped through the Brunswick port is part of a national trend this year.

U.S. wheat exports in the world trade year of July 2013 through June 2014 are projected to be higher than projected. Reasons for the increase include revisions in China’s supply and demand, and an interruption of wheat exports from Argentina, according to the trade publication hellenicshippingnews.com.

Argentina’s government halted wheat exports in June to address rising prices for flour and bread, according to wsj.com The country’s wheat production fell by a third because of dry weather and a decision by farmers to shift to other crops that are more profitable, such as barley.

In shipping wheat to Mexico, Georgia is participating in a trade agreement with the third-largest export market for U.S. wheat. Only Japan and Nigeria import more wheat from the U.S., according to figures from the Minnesota Department of Agriculture. China has become an increasingly large consumer of U.S. wheat, although China and India are the world’s leading wheat producers.

The Brunswick port is the second busiest on the East Coast in terms of wheat export, behind only the Perdue Farms, Chesapeake Grain Elevator Ship Wharf, which is located in Chesapeake, Va.