‘Where have all the flowers gone?’ – May is a time of remembrance 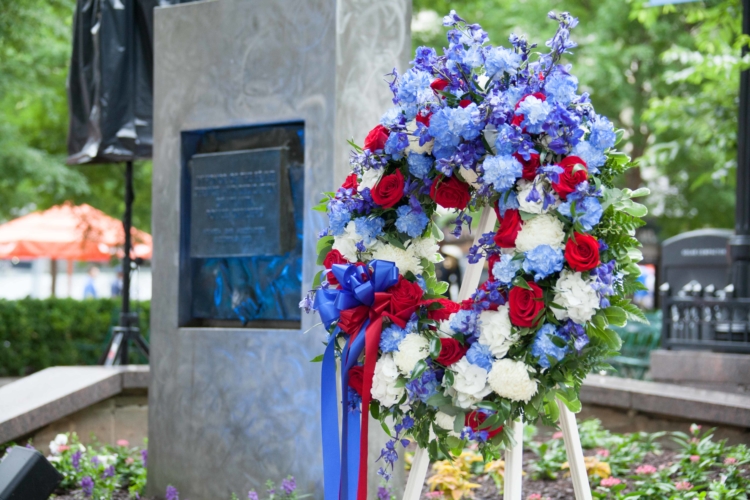 Atlanta civic leaders gathered Tuesday at the 'Give Our Police a Hand Monument' in Woodruff Park to recognize public safety agencies that serve the city and state. Credit: CAP

This has become a season of recognizing lives lost. Victims of Atlanta’s Child Murders were acknowledged Wednesday by Mayor Keisha Lance Bottoms. They join slain police officers who were recognized this week across the city, state and nation. Fallen soldiers are remembered on Memorial Day. 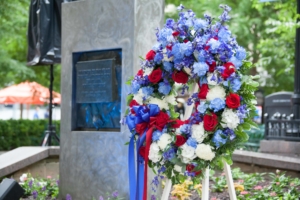 Atlanta civic leaders gathered Tuesday at the ‘Give Our Police a Hand Monument’ in Woodruff Park to recognize public safety agencies that serve the city and state. Credit: CAP

Bottoms announced the members she’s appointed to a task force – comprised of civic leaders to be led by cultural icon Frank Ski – to divine an, “appropriate way to acknowledge lives lost during the Atlanta Child Murders.” The mayor’s statement doesn’t specify when or how the remembrance occurs, only that a progress report is due to her by the end of 2019.

“We hope to create a space that not only allows for grieving and healing, but also for peace and hope in remembrance of the young lives lost,” Ski said in the statement of 28 slayings committed from 1979 to 1981.

This acknowledgement is part of an effort the mayor announced in March to have existing evidence in the case reexamined by Atlanta police, Georgia Bureau of Investigation and the Fulton County district attorney’s office. Wayne Williams is serving a life sentence following his conviction in two of the deaths.

The announcement of task force members comes the day after civic leaders paused Tuesday to honor public safety agencies that serve in the city and state. The Atlanta Child Murders case was front and center in that event, in that it was convened in Downtown Atlanta’s Woodruff Park at the site of the Give Our Police a Hand Monument.

The sculpture dates to the era of the murders. The Atlanta Bar Association dedicated the sculpture in 1980 to recognize slain police officers at a time public awareness focused on the killing spree. Artist Steve Steinman describes the intent of his creation in this report on his website:

The event Tuesday came as part of the nation’s recognition of fallen police officers.

“I especially pray for all those who have lost a loved one in the line of duty,” Isakson said in a statement. “The National Police Week resolution is but a small token of thanks and remembrance to those who have paid the ultimate sacrifice.”

Eyes turn to Savannah on Saturday, to recognize the May 11 slaying of Savannah Police Sgt. Kelvin Ansari.

Ansari, 50, died of injuries sustained when he and other officers approached a vehicle related to an earlier robbery call. The suspect opened fired, according to a statement on savannahpd.org. The GBI is investigating the case.

Police and residents lined the streets of Savannah on Monday to honor Ansari as a motorcade passed enroute to delivering the officer’s body to a state crime lab for autopsy, according to a report by abcnews.go.com.

On Saturday, Gov. Brian Kemp has ordered flags to be flown half-mast on Saturday over the state Capitol and in Camden County. Ansari’s funeral service is to begin at 11 a.m. and police advise spectators who want to line streets to be in place by 11 a.m. to avoid road closures.

Perdue said in the statement: “Sgt. Kelvin Ansari of Savannah was killed while working to protect his community. This tragedy underscores the dangers that law enforcement officers face in the line of duty. It’s because of their bravery and courage that countless lives are saved in Georgia every day.”

Previous Article
Atlanta to have ‘pick your own’ food forest with vegetables, nuts, berries
Next Article
Bottoms a no-show on city leaders’ trip to Pittsburgh