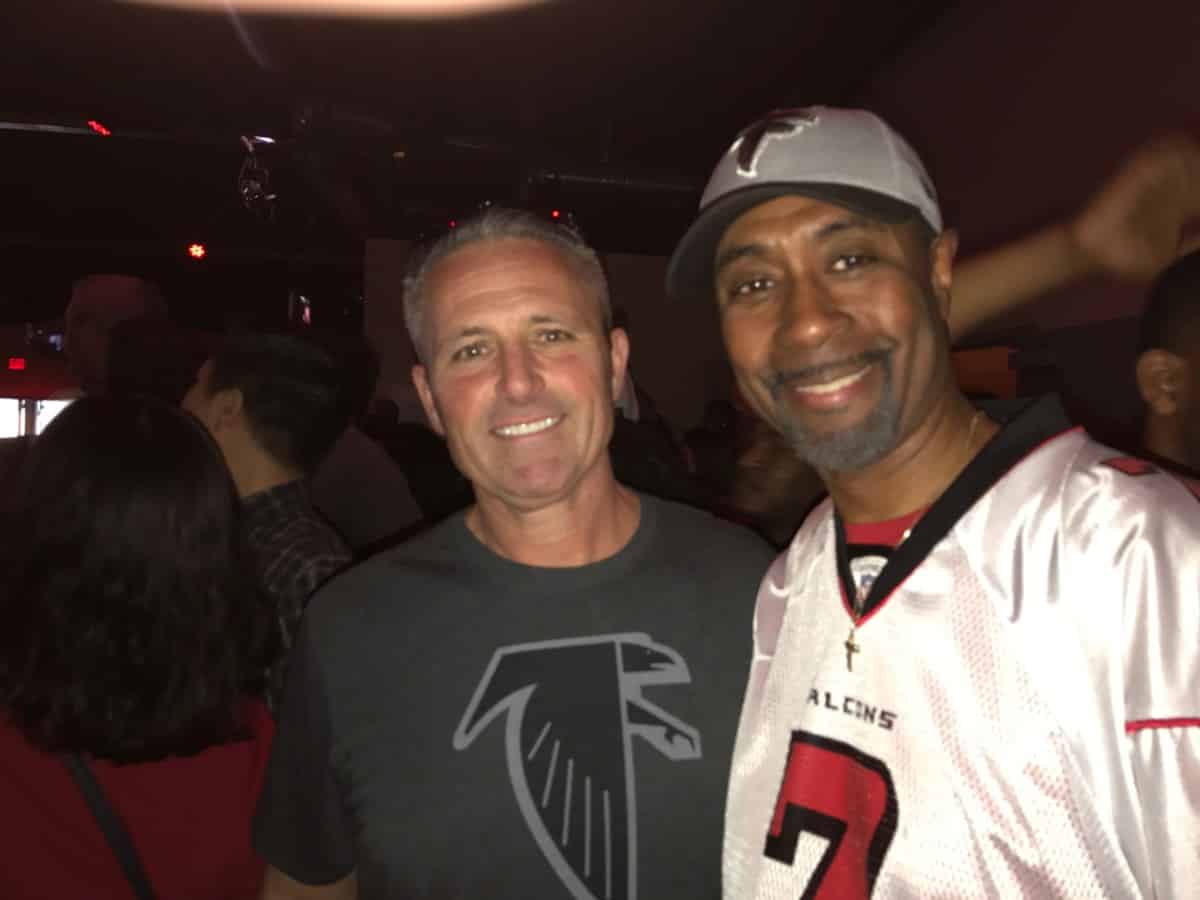 Atlanta businessman Julius Hollis (left) started the Super Bowl Ebony party for the 1994 Super Bowl in Atlanta with his associate Willard Jackson, who acquired Ebony magazine last year - a tradition that is now 23 years old. Hollis said he’s delighted to be able to have so many of his friends from Atlanta come to the party, which supports HBCUs around the country. (Photo by Maria Saporta)

HOUSTON – Atlantans are hungry for a Super Bowl win.

That was pretty much the consensus among dozens of folks who made the trip from Atlanta to Houston to be in the city hosting Super Bowl 51.

Atlanta Mayor Kasim Reed, who arrived Saturday night, went to a party put on by the NFL and Ebony Magazine. He said he was feeling good about Atlanta’s chances. 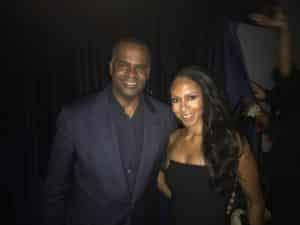 Atlanta Mayor Kasim Reed with his wife – Sarah Elizabeth – at the Ebony-NFL party. He was introduced to the crowd by the Mayor of Houston. (Photo by Maria Saporta)

Minority Falcons owner Doug Hertz arrived on Thursday, and he was hanging with associates of Arthur Blank, majority owner of the team. Blank invited 500 of his associates to come to the Super Bowl, a move that was heralded by many from Atlanta.

Some of Atlanta’s top executives weren’t arriving until Sunday before the game.

The streets of Houston led to several chance encounters, including a jubilant Darren Eales, president of the Atlanta United soccer team.

Michael Paris of the Council for Quality Growth was amazed by all the activities in Houston.

“I had no idea how big all this would be,” Paris said. “The number of people is astounding.” 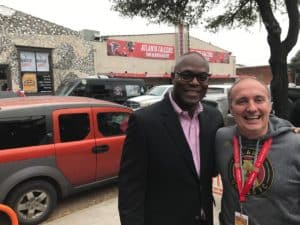 Pedro Cherry, an executive with Georgia Power, says hi to fellow Atlantan, Darren Eales, president of Atlanta United. They are standing in front of the Falcons Fan HQ, based in the Warehouse, about three blocks from all the hubbub of the NFL Live experience on Discovery Green in downtown Houston. (Photo by Maria Saporta)

Literally blocks and blocks of streets in downtown Houston had been turned over to Discovery Green – a place where locals and out-of-towners could gather to get into the Super Bowl spirit. Concert venues, sports talk shows and all sorts of rides and games were available for those with a ticket.

At several times, they had to pace the people coming in because of the crowds.

Hala Moddelmog, president of the Metro Atlanta Chamber, also was planning to come to Houston.

Several others were planning to be present to see the Falcons play on Sunday evening.

They include Erica Qualls-Batey of the Marriott Marquis; Ted Blum of Greenberg Traurig; Wonya Lucas of Public Broadcasting Atlanta; Milford McGuirt of KPMG; and Eugene Duffy, a financial and political consultant.

Atlantan Julius Hollis, who has been organizing the NFL-Ebony party since 1994, when Atlanta was hosting its first Super Bowl, said the chic event will likely raise in the “mid seven figures” for Historically Black Colleges and Universities.

The feeling – pretty universally shared by people from Atlanta – was that the Falcons would be bringing home the city’s first Super Bowl win. 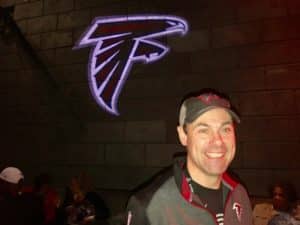 Michael Gomes, the Falcons executive in charge of fan experience, said they found the venue within days of the Falcons winning the NFC Championship. He said Super Bowl teams don’t usually have a venue for their fans during the Super Bowl. Atlanta fans without tickets will be able to watch a live broadcast of the game inside the venue. Now the NFL wants to find out more about what the Falcons have done so they can replicate it in future Super Bowl festivities. (Photo by Maria Saporta) 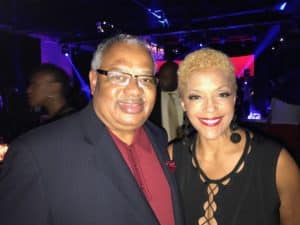 A special NFL and Ebony Magazine party was held at swanky club Saturday night in downtown Houston. Georgia Pacific’s Curley Dossman stands with the former chairman of Johnson Publishing – Linda Johnson Rice. She still serves on the board of the company that was sold to new owners last June. (Photo by Maria Saporta) 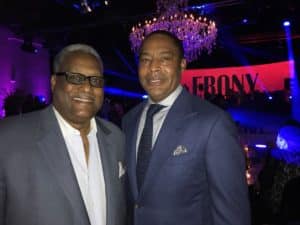 Atlanta businessman Julius Hollis (left) started the Super Bowl Ebony party for the 1994 Super Bowl in Atlanta with his associate Willard Jackson, who acquired Ebony magazine last year – a tradition that is now 23 years old. Hollis said he’s delighted to be able to have so many of his friends from Atlanta come to the party, which supports HBCUs around the country. (Photo by Maria Saporta) 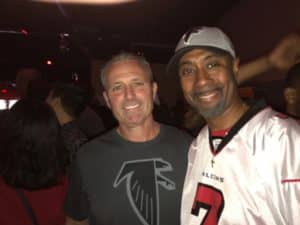 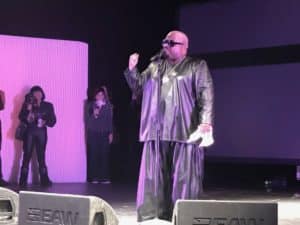 Performer CeeLo Green tells Atlanta fans to Rise Up. The Falcons are going to win, he tells them from the stage. (Photo by Maria Saporta) 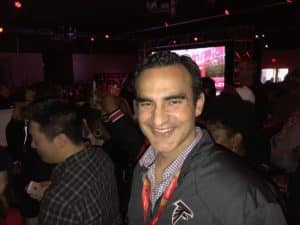 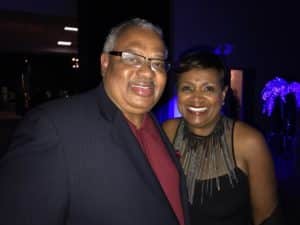 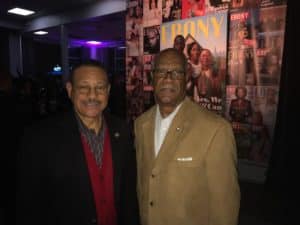 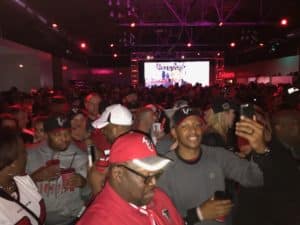 The Falcons Fan HQ is filled to the brim with fans. This is only one of the two large rooms that were packed, including another room from where 92.9 radio station was broadcasting. (Photo by Maria Saporta) 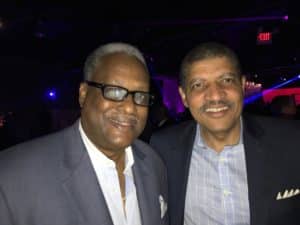 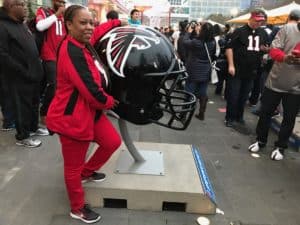 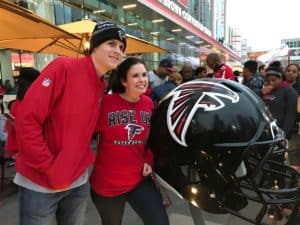 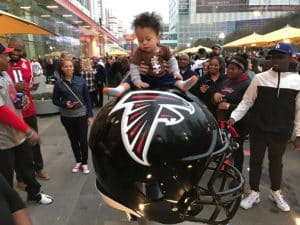 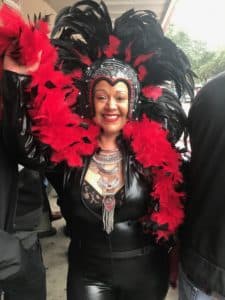 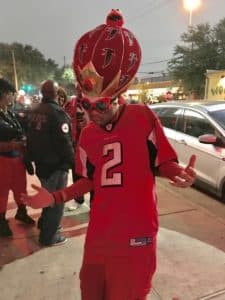 This Falcons fan is working it…. (Photo by Maria Saporta) 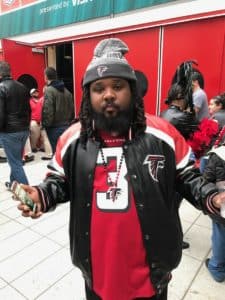 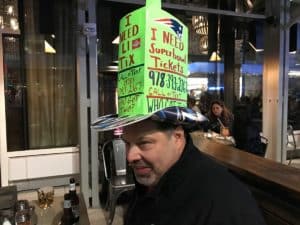 Man advertises for Super Bowl tickets. Eight in his group needed tickets, and they had already secured four through this unusual advertising technique (Photo by Maria Saporta)