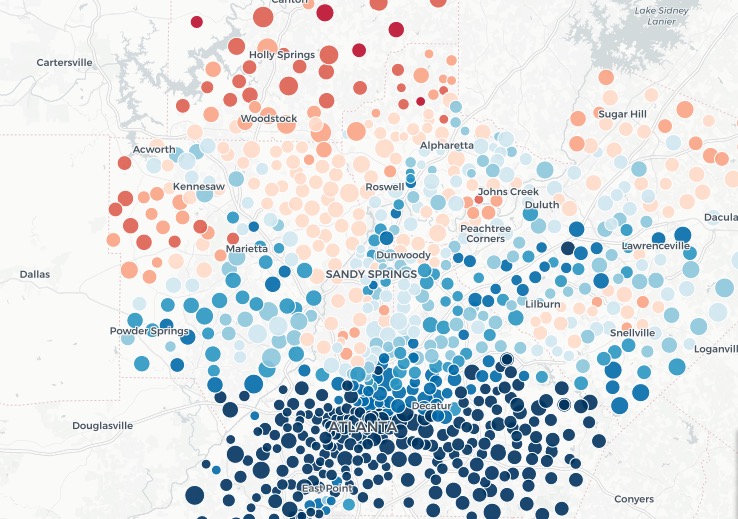 It’s no secret that Georgians cluster in metro Atlanta — a blue dot in a red sea.  But a look at a map shows just how much population is concentrated in metro Atlanta, and why changing the size of that dot just a little bit can swing elections.

North Cherokee and south Fulton give some idea what other parts of the state are like compared to inner metro Atlanta: much redder but much less populous.

Fulton’s July 2017 population was about 1.04 million. That’s about one in 10 Georgians. This map alone — these six metro counties – are home to about 40 percent of Georgians.

Footnotes:
Election results come from the Georgia Secretary of State’s office as of Nov. 20 and Nov. 21, 2018. Voting precinct maps come from each county’s GIS department, all maps retrieved online.
The dot for each precinct is determined by QGIS, a computer program, selecting a geographic center for each precinct. Each dot is therefore a rough approximation of the center of each precinct, not a dot on each polling place.
The map is published via carto.com.

See a list of all Georgia county populations from the U.S. Census here.

Previous Article
Changing the Landscape of our Prisons, One Person and One College Course at a Time
Next Article
Hair Apparent – Bronner Bros. August 2018 by Kelly Jordan