From Tucker to Sandy Springs, the state Democratic Party is making good on plans to run candidates in suburban city elections. Think local ripples from the “blue wave” that already washed Republicans out of north metro Congressional and General Assembly seats, helped flip Georgia to Biden, and, Democrats hope, puts one of their own in the Governor’s Office in 2022. 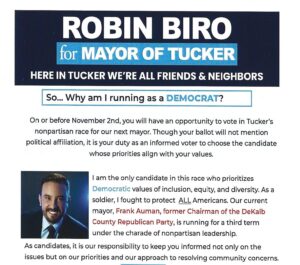 Is the unprecedented Democratic push in Republican-founded suburbs about to ruin (officially, supposedly) nonpartisan municipal politics? Is it just flashy advertising for a leftward shift that already happened in diversifying cul-de-sac communities?

Anxiety from party faithful on both sides abounds — though they’re still happy to take shots at one another. The one certainty is that the Democratic energy is making for more competitive and racially diverse mayoral and city council races in some cities.

John Jackson, chair of the DeKalb County Democratic Committee, is unrepentant about carrying out the state party’s agenda of contesting local races. Jackson says candidates are emboldened by the historic victories of Democrats Jon Ossoff and Raphael Warnock in the U.S. Senate elections early this year. And, he says, the Democrats are only doing what the GOP did for years in dominating city races and using them to build benches of candidates for higher office.

“The Republicans have this narrative, ‘It’s a nonpartisan election. Party politics doesn’t matter.’ We’re coming back and saying, ‘No, this is the party of Trump…’” said Jackson. “I’ve been called divisive over injecting partisan politics… but I think we’re at a point in our country where it matters. You do need to know if somebody has a party affiliation. Somewhere down the line, it’s going to matter.”

“First and foremost, the DeKalb GOP respects the fact that it is a municipal election and it’s supposed to be nonpartisan, so we respect the spirit of that,” McCarthy said. Then again, the county party is backing local candidates, too, with training and other support, she said.

Trey Kelly, chairman of the Fulton County Republican Party, expressed a similar stance about being dragged into the fight.

“It’s always been that municipal elections have been about local issues and nonpartisan candidates. Now it does at least seem to be the new normal that Democrats are targeting smaller cities so that they can control government wherever they can,” Kelly said. “That said, we are simply trying to make voters aware that is the case. People move to the suburbs because they don’t want to be exposed to the problems that Democratic-run big cities develop.” 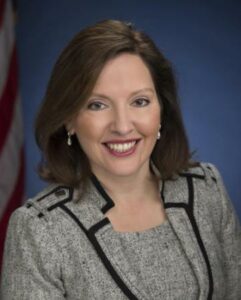 Brookhaven City Councilmember Linley Jones rode her own, very personal blue wave in recent years, making a dramatic shift from former DeKalb County Young Republicans leader to a Democrat as national GOP policies increasingly left her appalled. But Jones — whose seat is not on the ballot this year — says she is no fan of the Democrats’ local strategy. She says the young city was founded for nonpartisan ideals of local control.

“Juxtapose that to our era of extreme partisan division… Why in heaven’s name would we want to adopt that approach in our own backyard?”  Jones asked. “I also have serious concerns about injecting political party money into our highly successful [city] elections.”

Jones continued, “It is quite literally heartbreaking to me to think of making City of Brookhaven elections partisan. I hope that this concept of partisan local elections dies a swift death.”

The definitions of “nonpartisan” and “partisan” are slippery, especially when lubricated with the overarching suburban goal of at least seeming friendly to your neighbor. There’s no question that city races are legally nonpartisan, and Georgia voter registration is not done by party, so city candidates can always jump through that loophole to call themselves independent when partisan criticisms start flying. 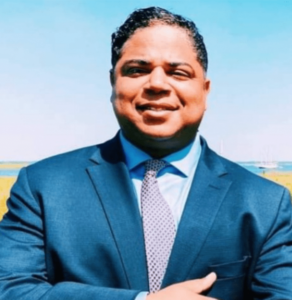 Filling potholes is nonpartisan, as local mayors love to say. But the formation of Sandy Springs in 2005 and many copycat cities were hyper-partisan acts of Republicans breaking away from Democratic county governments, albeit with broad grassroots support. Many of these cities’ early mayors were prominent Republicans, like current incumbents Frank Auman in Tucker, a former county GOP chair, and Rusty Paul in Sandy Springs, a former GOP state senator and state party chair.

While many policies may have been nonpartisan, local leadership long was more uni-partisan, with Republicans dominating so heavily that Democrats were in the closet. Sandy Springs saw at least two City Council elections where merely calling an opponent a Democrat was considered a devastating smear.

However, open partisan battles are frowned upon, as nonpartisanship is entwined with similar ideals of politeness and peacefulness — legitimate or cosmetic. On issues like zoning and policing, middle-class homeowners who dominated the electorate often agreed regardless of party affiliation. Battles on more ideological topics — such as affordable housing — were often carried out behind closed doors in such cities as Sandy Springs.

Candidates backed by today’s Democratic push are largely following this tradition and avoiding direct party labeling. Dontaye Carter, the challenger to Paul for Sandy Springs mayor, is communications chair for the Fulton Democrats but is campaigning more generally as a progressive. A rare exception is Robin Biro, who is challenging Auman as Tucker’s mayor. Biro has a campaign mailer touting himself as a “proud Democrat,” blasting Auman’s “charade of nonpartisan leadership,” and claiming ongoing danger from Trump supporters who attacked the U.S. Capitol early this year. 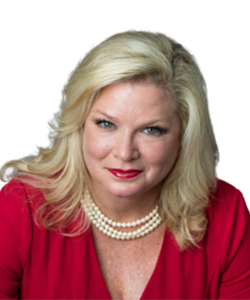 In some areas, the Democratic Party is following trends, not leading them. Brookhaven and Dunwoody already elected Democratic- or left-leaning mayors in recent years. The blue wave showed the change in the general electorate, as did unprecedented Black Lives Matter protests in subdivisions last year across the north metro. Jackson said in places like Tucker, the party is basically just asking why Republicans are leading a Democratic electorate.

But the Democrats are also pointing out that some local issues are indeed quite partisan, such as LGBTQ nondiscrimination ordinances, a point of dispute in Tucker. McCarthy, the DeKalb GOP chair, said the local issues candidates should focus on instead of national politics include pandemic mask mandates, but then acknowledged such policies are highly partisan issues that varied among cities depending on their leadership.

Brookhaven’s City Council District 2 is one local race where this political battle is playing out with candidates expressing chagrin even as the parties back them. The DeKalb Democrats are supporting incumbent John Park, as well as District 4 newcomer John Funny, both of whom avoid the word “Democratic” and speak of nonpartisan leadership. The DeKalb Republicans are backing Katie Dunagan, a newcomer who is challenging Park.

The Dunagan-Park battle has included social media meme combat over national politics, including Dunagan’s vote for Trump as president.

Dunagan said she’s running due to many prominent controversies over the lack of public input into development plans and other city activities. “Yeah, everybody had to vote for somebody,” she says without enthusiasm about her previous support of Trump.

“It’s so not what the City Council race is about,” Dunagan said. “People are getting, in my opinion, diverted from what [are] city issues… It doesn’t have anything to do with the national politics — it shouldn’t.”

Park claimed in an email that the bashing has gone both ways. “Although I had hoped that this election would follow the tradition of nonpartisanship (and focus on Brookhaven) that we established in 2014 when I first ran, partisan politics has been injected into this election from both sides,” he said.

Park says he has bipartisan support, pointing to an endorsement from former state Sen. Fran Millar, a Dunwoody Republican who got washed out with the blue wave. Millar’s endorsement has annoyed the DeKalb GOP, but he says it’s just an example of the old nonpartisan ways everyone says they love.

Millar says he not only worked with Park, but the councilmember also once door-knocked for the senator’s own campaign. “I found him to be engaging. We worked on a bipartisan basis,” said Millar, adding he didn’t even know a Republican was running.

“Not all Democrats are demons and neither are all Republicans and, unfortunately, both parties are being identified by what I’ll call the extremists on both sides. And that’s not healthy,” said Millar. 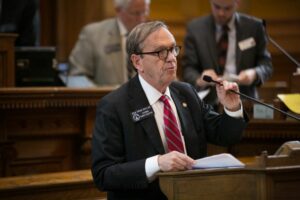 He was quick to opine about the recent Democratic push, though. “To be fair, it was the Democrats who threw this gauntlet down.”

Millar said he thinks the Democrats will fail to seize a significant amount of local seats statewide and questions the rationale of building benches of candidates, noting that both parties these days are fielding newcomers like football legends and businessmen for U.S. Senate.

The big partisan issue that concerns Millar is turnout. He condemned the “foolishness” of some Republicans calling for a boycott of the 2021 or 2022 elections in the wake of Trump’s election-fraud conspiracy theories. “I thought the Republicans were supposed to be the party of the educated,” he said with a laugh.

McCarthy is concerned about turnout, too, noting dismal numbers for the start of early voting last week. She said the county party is recruiting poll watchers in part to drum up interest in participating. And the new wave of Democratic candidates might have one benefit, she said, in terms of turnout and good old democracy.

“I think competitive races, regardless, are the best thing to happen,” she said, “because — may the best candidate win that reflects the electorate.”