Working with Nature to Keep Our Heads Above Water 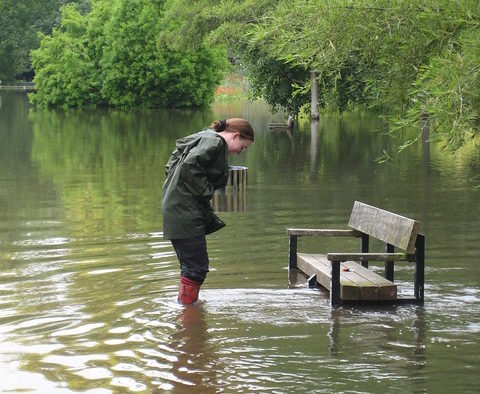 Over the last several years, many Georgians suffered from the most costly and common of disasters in the nation—flooding. Fueled by warmer weather, the National Oceanic and Atmospheric Administration (NOAA) reported that 2019 was the wettest on record in the U.S., with historic flooding taking place across much of the nation. Flooding is an issue in many areas of our state—from urban areas like the South River in metro Atlanta to rural locations along the Flint River and frequent ‘sunny day’ or tidal flooding in coastal communities.

From March through July, flooding along the Mississippi River and its tributaries caused an estimated $17 billion in damages. And, combined, Hurricane Dorian and Tropical Strom Imelda resulted in some $6.6 billion in damages, most of which was caused by flooding. This follows 2017, when the cumulative cost of the nation’s 16 separate billion-dollar-plus weather events was $306.2 billion, breaking the previous record of $214.8 billion in 2005. Not surprisingly, the National Flood Insurance Program, which is supported in part by taxpayers, is more than $20 billion in debt.

It’s time to rethink how we plan and prepare for flooding. While constructed infrastructure like dams and levees has played a significant role in the past, these approaches alone are no longer sufficient for a world where flood and storm events are becoming more frequent, extreme and costly. This type of infrastructure impacts natural river flows and cuts off habitat connections up- and downstream and across floodplains. Plus, when these protections fail, they fail big, threatening lives and often leading to greater damages to property and farms.

Instead of working against nature, we must look to it as an essential partner in building resiliency for our communities and economies. For instance, a study conducted by The Nature Conservancy and the insurance industry revealed that healthy coastal wetlands in the American Northeast prevented more than $625 million in flood damages during Hurricane Sandy in 2012.

Consider that just one acre of wetlands can hold about 1 million gallons of water—more than an Olympic-size swimming pool—reducing impacts on communities during floods. Undeveloped barrier islands protect mainland areas from storm surge and damages. Healthy oyster reefs can save communities $85,000 per year per hectare (~2.5 acres) when used in place of artificial breakwaters. And for every $1 spent on restoring wetlands and reefs, more than $7 in direct flood-reduction benefit is achieved. Georgia is rich in wetlands, floodplains, salt marshes, barrier islands and other natural infrastructure, and it is imperative that they are protected and allowed to flourish into the future.

Nature not only offers us cost-effective defenses against floods, it also provides additional benefits. Healthy natural areas support wildlife, recreational opportunities and the outdoor industry. Wetlands filter out pollutants to improve water quality. They also recharge aquifers that are critical to agriculture and provide drinking water for an estimated 38 percent of the U.S. population.

To improve how our nation addresses floods, we must enable federal agencies, state governments and local municipalities to increase their investments in natural infrastructure. For instance, Water Resources Development Act legislation from 2016 and 2018 included provisions that allow for levee setbacks, which we hope will be implemented quickly to help avoid future flooding. And the 2020 legislation should include additional policies promoting the use of nature-based solutions to reduce risk. Similarly, there is room in the upcoming highway bill for enabling provisions that advance the use of nature-based solutions that can help communities address infrastructure challenges and become more resilient in the face of storms and floods.

Along with enhancing and reforming infrastructure investments, we must support the greater use of science to accurately identify areas at risk of flooding. For instance, a recent study by TNC and partners found that 41 million Americans—some 13 percent of the population—are at risk from flooding rivers. That’s more than three times the current estimate based on regulatory flood maps. Also, less than one-third of our streams rivers and coastlines have mapped flood hazard areas, which means there is a significant risk that the location and protection of new development is not guided by flood risk information.

In collaboration with Camden County and other partners, TNC has developed several online tools to help residents and community planners better understand local flood risks and coastal hazards. This ‘Rise Ready’ tool allows users to search for specific locations within the community, layering important flood hazard data, such as Sea Level Rise or Storm Surge predictions, with local data, such as critical infrastructure or zoning, to show a projection of both current and future potential flood risks. This was created to help inform local decision making and promote a more comprehensive flood risk awareness to the general public beyond traditional FEMA flood maps.

Congress and the Executive Branch should also reinstate the Federal Flood Risk Management Standard, which creates common-sense rules to help protect communities from floods and taxpayers from paying for damages as floods become more intense.

And when disasters strike, federal relief funds should be used not just to rebuild the same concrete structures we’ve traditionally relied upon with mixed results, but also to support nature-based solutions that can help keep our nation above water, both literally and financially.