The would-be builder of the last coal-fired power plant in the U.S. just lost its state permit to build a proposed Sandersville facility.

The Georgia permit revocation is a formal obituary for an idea that never got much further than planning, a sign on a part-graded site and talk.

Power4Georgians was dissolved in August 2017. That was the same month the plant’s chief promoter, Dean Alford, was quoted in Scientific American saying that the plant was still proceeding despite delays from uncertainty over greenhouse gas regulations. 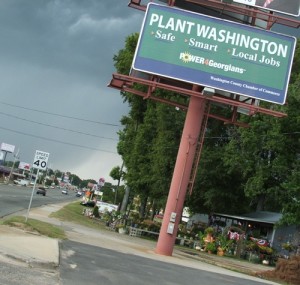 Boosters hoped Plant Washington would be safe, smart and provide jobs. But even boosters’ hope was dwindling by 2015, when this photo was taken in Sandersville. File/Credit: Maggie Lee

And in late 2019 Alford, who was a member of the Georgia Board of Regents, was charged with racketeering and other charges, accused of submitting fake AES invoices in an attempt to get money out of several Georgia colleges and businesses.

Alford turned himself in and is now out on bail. Calls to Alford’s mobile phone and the AES office numbers were not answered Tuesday.

In 2016, Power4Georgians had asked the state to extend the deadline for it to start work. A March 2020 letter from the Georgia Environmental Protection Division denied the extension and gave P4G 30 days to appeal. No appeal arrived.

And coal? Georgia Power is edging away from coal, betting that the future will be carbon-constrained, and taking advantage of the much lower cost of natural gas.

For years and years, Katherine Helms Cummings has watched and fought Plant Washington from her spot as leader of the Fall-Line Alliance for a Clean Environment. The Sandersville struggle united Georgia environmental groups including the Sierra Club, the Southern Environmental Law Center, Riverkeeper groups and others. Besides rejecting the plant for burning dirty fuel, they’ve long doubted it was economically viable anyway.

Cummings pointed out that in these years of talk about coal, a solar plant has been built in Washington County and is already producing power. The formal permit revocation from the EPD is a moment of closure and release for her.

“The ability to produce clean renewable energy right here in Washington County is further proof that dirty, outdated power generation does not make fiscal or environmental sense,” she said via email on Tuesday.