The bad news: pandemic cuts of over 40% to the trip schedule likely will become the official new normal. The good news: millions in federal money to start shifting the fleet to electric buses. 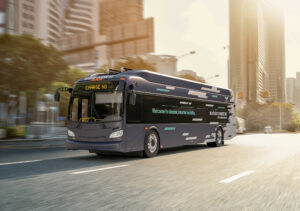 Xpress has long been a popular commuting option, running 27 routes in 12 metro counties that shuttle commuters to Atlanta’s Downtown and Midtown as well as Perimeter Center. But the COVID-19 pandemic impacts on ridership was brutal. Earlier this year, planners at the Atlanta-Regional Transit Link Authority (The ATL) said Xpress ridership was getting outpaced by that of state-subsidized vanpools for the first time.

Xpress never eliminated entire routes, but slashed the number of trips on each of them. Now with demand still low as teleworking persists, planners propose turning that into a new normal — or in official jargon, a new “Level of Service baseline” — of 57.4% fewer trips than pre-pandemic.

The proposed trip cuts would affect all routes except two brand new ones — 484 and 485 — that serve Bartow, Cherokee and Cobb counties from Acworth.

“The COVID-19 pandemic has been like a war where the enemy is the virus,” said Gail Franklin, the system’s chief transit officer, at a July 1 meeting of the ATL’s Xpress Operations Committee.

The committee also heard results of a survey of about 440 riders that found 53% using Xpress less due to teleworking and only 60% expecting to return to offices at least part-time.

Franklin said the proposed new level of service planning included an “equity analysis” that assures there is no disproportionate burden on low-income communities and no disparate impact on minority communities.

Resetting the baseline level of service isn’t just a retreat. It’s also a strategy for incrementally increasing service if demand grows. ATL Executive Director Chris Tomlinson, who also heads the authorities that directly operate the Xpress, said that in the works is “a very specific marketing campaign” to draw riders back by touting safety and other features.

The full ATL board is scheduled to vote on whether to accept the new normal at its Aug. 5 meeting.

Meanwhile, Xpress has something new and shiny to tout: the $5.47 million federal grant toward a roughly $15 million project to replace 10 of the oldest buses in its 166-vehicle fleet with cutting-edge electric models.

Tomlinson said in an interview that it’s intended as a pilot program in eventually electrifying the entire fleet and figuring out how charging technology can work, including compatibility with that of other systems like MARTA.

“This initial implementation of 10 electric vehicles is really part of our planned effort to get operational experience with this new technology,” he said. “… We do want to do a fleet electrification plan.”

The ATL has yet to formalize a timeline, but says it estimates the infrastructure will be complete and the buses deployed by summer 2023.

The buses targeted for replacement date to 2004. The proposal is for them to “initially” operate on routes in Clayton, Coweta, Fulton and Henry counties that connect to Downtown and Midtown. The project also includes 11 charging stations, with one an Xpress maintenance facility in Clayton.

The buses are the new “D45 CRTe LE Charge” model produced by Illinois-based Motor Coach Industries, the features of which include a low-floor design that allows easy access for riders with disabilities. 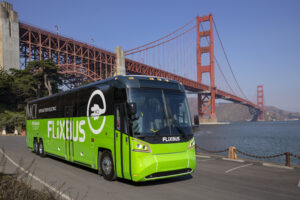 “These electric coaches provide numerous benefits,” Tomlinson said in a press release, “including helping us improve fleet reliability, reducing our long-term maintenance needs, improving air quality, reducing noise pollution in the communities we serve, and eliminating the need for 87,000 gallons of fuel while reducing 901 tons of carbon emissions.”

Tomlinson told the Xpress Operations Committee that the ATL is in talks with Georgia Power about how to install the charging devices — including without creating such a huge electricity draw that the Clayton facility needs a new substation “which we can’t afford.” And the ATL is also talking with MARTA about sharing the electric-vehicle charging infrastructure, “so we don’t end up with a fragmented approach in the region.”

The grant the ATL obtained for the project comes from the Federal Transit Administration’s “Low-No Program” for low- or no-emission transit vehicles, which this year prioritized environmental justice and workforce development goals.

The federal grant totals $5,473,485. The ATL is providing $9,491,430, which includes the $6.7 million base cost of the buses. The grant helps to make up the difference in cost between a regular diesel bus and the electric version, according to an ATL spokesperson.

The ATL’s partners in the grant include MCI along with the Center for Transportation and the Environment, an Atlanta-based nonprofit that offers technical assistance on this kind of fleet transition, and the civil engineering firm Atkins, which will do the charging installation.

Once those first 10 buses are on the road, Tomlinson said, Xpress can start thinking about transitioning the rest of the fleet — the newest vehicles of which date to 2018 — to electric as the buses age out. “It’s clear this is where the technology is going,” he says.

Update: This story has been updated with information from The ATL about the bus deployment timeline.