The year the music died 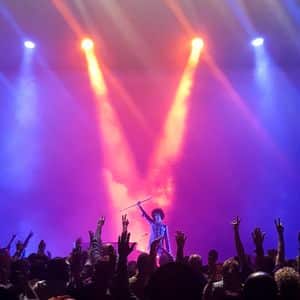 What a strange jam session there might have been, if Papa Wemba, Prince, Merle Haggard, Pierre Boulez and David Bowie had ever wound up in the same room.

Across a very wide spectrum of genres and several countries, this has been a hard year for music lovers. Particularly so, because the obituaries have included the names of so many who were change agents and pioneers, however much celebrity they obtained. George Martin, the Beatles producer, epitomizes something about those who have passed in this still-short year: without ever picking up a guitar or playing a stadium, he had an impact on popular music which has lasted decades.

Even if most of them lived out full careers, the passing of so much of the century’s accumulated creative spark comes at a particularly ominous time. Last year, for the first time ever, golden oldies — more precisely, music that was 18 months old or older, outsold new releases. However much you like Lefty Frizzell or the Stones or Basie, this is not a positive sign.

That doesn’t include revenues from streaming services like Spotify and Apple Music, and when you do include these new, online destinations, the music business had its first modest growth year — 3.2 percent, which would be a flop if we were talking about a recipe app — since 1998. Even so, the worldwide recording industry is worth little more than half  what it was when cd sales peaked: $15 billion in 2015 compared to $28.9 billion in 1999. Streaming traffic is up, but it doesn’t even make as much money as vinyl. Veterans of the newspaper industry should at this point be getting a clammy sense of recognition.

The weight of these losses have fallen mostly on the creative side of the business, and the advantage of last year’s gains will mostly go to the promotion of fewer and fewer artists.

It may seem ironic that an artist whose estate is now being estimated in the hundreds of millions should begin the last concert of his life, on April 14 in Atlanta, covering an old Staples Singers song, “When Will We Be Paid?” This was more obviously a nod to the reparations movement, but it could also have been informed by Prince’s many battles with the recording industry. Prince, who never signed his name to anything and kept the rights to all his recordings, went so far as to change his name to a symbol for a while to get out of a contract, and held out to the bitter end against the streaming services.

The greater irony, really, is that by the end Prince was giving away what after his death is being said to be worth such an extraordinary amount. He could afford to do that. The pity is so many less successful artists are being forced to do the same.

Every ticket holder on his last tour got a free cd copy of Prince’s last album, “HitnRun Phase Two.” This was generosity in part, but it was also an expression of the artist’s lifelong frustration with a system which couldn’t release his recordings fast enough. It’s as if Van Gogh had been told to paint slower.

On Monday, the trustees for Prince’s estate had his legendary vault drilled open — he was the the only person who knew the combination — to access a trove of recordings which, it has been rumored, could produce an album of new music every year for the next hundred years. There’s a greater chance of that now than there ever would have been if Prince had lived on, because the record companies will only have to deal with his inheritors.

On his 69th birthday, Bowie released “Blackstar,”  an album which is nothing less than an attempt to remake impending death into a work of art. It has been his greatest commercial success, even bumping Adele’s “25” out of the way briefly, but that’s because he died two days after the release. Again, for an industry focused on sure things, death has a certain allure.

It’s not that there aren’t many younger, outrageously talented artists to follow in the footsteps of these creators. As he worked on “Blackstar” Bowie is said to have drawn inspiration from Kendrick Lamar’s “To Pimp a Butterfly.”

But at a time when something called “pop” is said to be on the ascendance in our political discourse and public life, the pipeline which has fueled popular culture for decades has broken down. Not even Prince would want to be listening just to Prince, a hundred years from now.