Zero Waste Westside: A community-based initiative to get folks composting

If you had to carry your waste around for one day, could you? What about one week or even a month? The average American accumulates about 4.9 pounds of waste each day, so your bag would likely get heavy pretty quickly.

To address this mountain of waste, three Atlanta-based environmental organizations launched a 90-day pilot program to boost sustainability in the city’s westside neighborhoods. 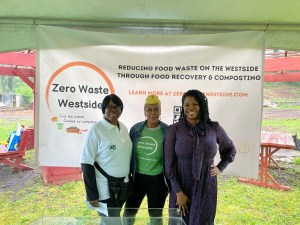 In April, Goodr, Truly Living Well and Green Is Lyf launched Zero Waste Westside, an initiative to educate folks on their everyday waste and provide resources to reduce their footprint through composting. Food is the largest category of waste sent to landfills, according to the EPA, accounting for nearly 25 percent of our waste.

The three organizations have been working to reduce waste for some time — with Goodr collecting edible and compostable food, Truly Living Well processing compost and running an urban farm and Green Is Lyf providing community outreach and education — but thanks to a $200,000 grant from Microsoft, they can now join forces and increase their impact. Microsoft has plans to set up its new Atlanta campus on a 90-acre plot in the Westside.

Carol Hunter, executive director of Truly Living Well, said that the goal is to help folks understand their daily waste, its impact on the environment and, ultimately, decrease waste in the Westside.

“This was a great opportunity for the three of us to create a paradigm shift in the attitude and behavior around food waste in Atlanta’s Westside,” Hunter said. “Second, we wanted to increase the volume of waste that is being diverted. The third [goal] was to deliver a proof of concept about scalability so that we can continue this work in partnership with others around the city, but also be a model for other places around the country.”

The project is geared toward residents and local companies, and so far, the outreach team has engaged around 2,000 residents, several companies and taught about 700 schoolchildren about the importance of sustainability practices in everyday life.

Here’s how it works: Households can drop off their compost, and local companies can request a pick-up from Goodr, at Truly Living Well’s farm site at 324 Lawton St SW, where the compost will be added to their urban farm. The nonprofit grows fresh produce and herbs, which can be purchased at their farmer’s market every weekend.

To encourage local companies to get involved, Goodr is offering one month of free composting to organizations that sign up through the Zero Waste initiative.

Composting is a critical piece of the larger sustainability effort because the compost can not only be used to provide nutrients to local farms, backyard gardens or even potted plants, but it also reduces methane emissions in landfills.

Municipal landfills are the third-largest source of human-related methane emissions in the U.S., according to the EPA, accounting for about 14.5 percent of these emissions in 2020. For reference, those greenhouse gas emissions are equivalent to about 20.3 million cars driven for one year. 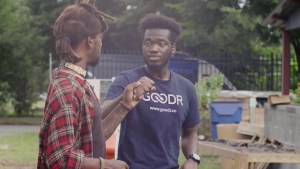 “There is no end to education. There is no end to us putting it out there that we can empower ourselves and show how we are fighting global warming, an excess of trash and hazards in that cause health disparities,” Jones said. “It’s a holistic approach that we’re using.” (Photo courtesy of Zero Waste Westside.)

To combat this astounding and unnecessary waste, the Zero Waste Westside team hopes the initiative will encourage folks to think twice before chucking their leftovers or food scraps.

“We’re so used to just throwing something in the trash, walking away and never considering it,” Hunter said. “So we’re asking people before you put something in that trash can, think about it. If you think about what [the average daily waste] looks like over the course of your week, your month or year, that’s a lot of waste that we personally are responsible for. If you’re committed to doing something about it, we’re your partners who can help you change that behavior.”

The initiative is focused on Atlanta’s Westside as a way to empower a community that has faced environmental injustice, like high levels of lead in the soil.

“We have been inundated with waste and environmental injustice through the years,” said Shadé Yvonne Jones, founder of Green Is Lyf. “These neighborhoods have been traditionally disinvested in for many years. They’re mostly low-wealth, African American and that’s just the bottom line. The truth of the matter is, if you’re low wealth anywhere, that’s where the injustices will occur. When you have an opportunity to invest in those who have suffered, it’s a blessing.”

Through this 90-day process, the team is focused on reaching community members and showcasing a second life for their food waste rather than rotting away in the city landfill.

“It does take a lot to change somebody’s habit, but we’re opening people’s eyes to something that they may not have known,” said Aliya Nealy, Goodr’s marketing manager. “We’re putting it out there so they can start to say, ‘Maybe I can see what this composting thing is about. Let me see what I can do about my food waste.’”

The leaders of these three Atlanta organizations see this partnership as a great example of nonprofits, local companies and large corporations working towards a shared, community-based goal.

“[Microsoft] created a power force of environmentally-engaged Black women,” Jones said. “You have to acknowledge Microsoft for that because we are so tired of people coming into the communities, talking about what we need and planning for us. But this empowers us and empowers the community.”

The team used the first 90 days for a community engagement campaign, but once that wraps up this month, the organizations plan to continue their efforts and, hopefully, secure funding to expand capacity.

For folks looking to learn more about the world of composting, head over to Truly Living Well on Tuesday, June 21 — Summer Solstice — for a tour of their farm and composting facility, along with live music, workshops and a farmers market. If you’re looking for ways to start composting while living in the city, click here for a few tips.