Zoo Atlanta visitors will be able to feed giraffes from a terrace that is to open next Spring.

For a small fee, visitors will be able to feed romaine lettuce to the giraffes, said Nevin Lash, an Atlanta landscape architect who is designing the new terrace and approach ramp. 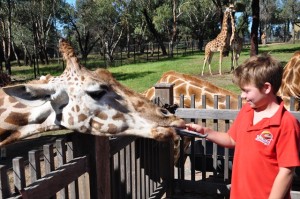 The giraffe's long tongue captures the attention of this young man. Credit: Ursa International from https://lewisfamilyexploringoz.wordpress.com

“It will be a great experience with a giraffe that has a 19-inch long tongue, which you don’t get to see unless it’s feeding directly in front of you,” Lash said. 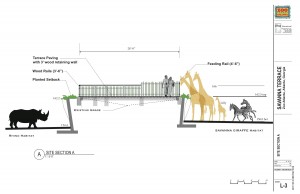 The terrace also will serve as an event space for breakfasts, meetings and other small gatherings, Lash said.

The $60,000 project is expect to be put out for bid in December and open in March or April. The exact date will depend on the weather, Lash said.

“It’s a small project that will have a big impact because it will get people closer to the animal,” Lash said.

The terrace and ramp will be installed in an area where a planter now serves to control views between the giraffe and rhino exhibits, Lash said. The ramp will be accessible, under the rules of the Americans with Disabilities Act.

The project is slated to be reviewed by the Atlanta Urban Design Commission at its Nov. 28 meeting. No opposition is expected, but the AUDC does need to review the construction plan because the zoo is located in the Grant Park Historic District.

With this project, Zoo Atlanta joins Oakland Cemetery in continuing to make improvements despite the sour economy. The zoo project is funded with private donations, while the cemetery is refurbishing 37 mausoleums with a matching grant of $200,000 from the Save America’s Treasures program, which is affiliated with the National Trust for Historic Preservation.

Zoo Atlanta has continued to implement its initial master plan for redevelopment, which was completed in 1986 and has helped guide the zoo into its modern era. Lash has been involved in a series of annual projects, along with his wife, Gail Lash. The couple operates Ursa International from their 1894 Victorian home in Grant Park. 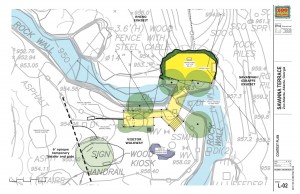