A scene from "The Trial of the Chicago 7”

The movies of the late ‘60s gave us all sorts of famous lines, from “We rob banks” (“Bonnie and Clyde”) to “Plastics” (“The Graduate”).

But one of the most famous was an unintentional adlib that bubbled up during the filming of Haskell Wexler’s “Medium Cool.” “Look out, Haskell,” yells an unseen crew member. “It’s real.”

“It” was the tear gas unleashed by the club-wielding police during the clashes between protesters and cops outside the 1968 Democratic Convention in Chicago. Wexler was filming in its midst.

However, those were hardly the last words to emanate from that historic moment of civil unrest. In 1969, the perceived leaders of the protest were brought back to Chicago and put on trial. 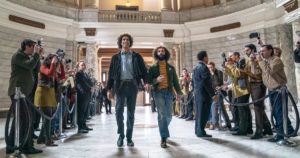 A scene from “The Trial of the Chicago 7”

Actually, there were eight defendants. Black Panther co-founder Bobby Seale (Yahya Abdul-Mateen) was tossed into the mix, mostly to incite further (racially charged) anger against the defendants. In actuality, Seale was in Chicago for about 4 hours, made a speech and had no part in the conflict.

Seale’s lawyer was in the hospital, and no matter how many times Judge Hoffman irrationally insisted, William Kunstler (Mark Rylance), the attorney for the other defendants, refused to act as Seale’s lawyer (an act Seale condoned). Before the trial was over, Seale was forced to sit in court bound and gagged (this really happened). He was eventually cut from the team, so to speak, and voila – the Chicago 7.

Courtroom dramas provide an excellent framework for Sorkin’s considerable verbal skills. After all, he’s written two of the best: “The Social Network” and “A Few Good Men.” Here, he’s handed some of the most colorful characters imaginable and he doesn’t stint on the smart-mouth dialogue. “He had a dream,” someone says of Dr. King. “Now he’s got a bullet in his head.”

The battle lines between the often clownish and always imperious Judge Hoffman and his obstreperous defendants are easily defined. It’s as if Fate knew all along this should be a movie. On the first day, Hoffman and Rubin show up wearing judge’s robes. When told to take them off, they do, revealing cop uniforms worthy of the Village People.

More impressive is the movie’s ability to delineate the differences among the defendants. The more presentable Hayden, the leader of the Students for a Democratic Society, continually stresses their beef is with the Vietnam War, not the Chicago police.

Hoffman and his wingman, Rubin, representing the Yippies (Youth International Party, a play on hippie) are more Marx Brothers than Karl Marx. Their playing field of choice is inspired comic anarchy. Dellinger is a middle-aged guy who’s been a conscientious objector since World War II. Weiner and Froines are pretty much just along for the ride, though one comments, “This is the Academy Awards of protests and as far as I’m concerned, it’s an honor just to be nominated.” 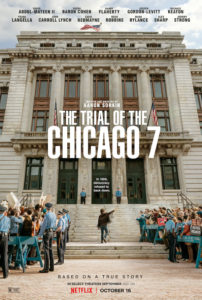 A poster of “The Trial of the Chicago 7”

Basically, the sprawling ensemble has terrific actors just about everywhere you look. Aside from the core 7 (8?) and their attorneys – Michael Keaton as former Attorney General Ramsey Clark and Joseph Gordon-Levitt as Assistant U.S. Attorney Richard Schultz.

But if you have to choose a best of the best, interestingly – inevitably? – look to the Brits. Cohen makes Hoffman into someone far more complicated than a showboating anarchist with an outrageous sense of humor. Redmayne is all but unrecognizable as the relatively buttoned-down Hayden (If Hayden had looked more like Redmayne in real life, maybe his marriage to Jan Fonda would’ve made more sense; incidentally, the marriage is never mentioned).

And Rylance is simply phenomenal. One of those chameleons who’s not always instantly recognizable (he won an Oscar for “Bridge of Spies”), Rylance makes Kunstler one very sly fox, watchful and unwilling to knuckle under just because the system says he should.

The film’s final scene is especially stirring even if – as I found out later – it actually happened mid-trial. And it reminds us that the schisms first paraded on the streets of Chicago or inside an out-of-control judge’s courtroom haven’t gone away.  If anything, they’ve become more dangerous.

“The Trial of the Chicago 7” is available on Netflix.