Shawn Simmons was nothing but exuberant as he showed off the view of Downtown Atlanta’s skyline from the balcony of a home he bought with help from a non-profit housing provider. “You can see the Westin, the 191, and the Georgia Pacific – that’s where I work!,” Simmons said.

Shawn Simmons, a brand new homeowner, beams on his porch that has a view of signature towers that comprise Downtown Atlanta’s skyline. Credit: David Pendered

Simmons didn’t pause as he stepped from the balcony into his new bedroom.

“I’m still like, ‘I got a house!’,” Simmons said. “I was so happy that I could scream. And I did scream and no one told me I was screaming too loud because – ‘I’ve got a house!”

And so he does. A restored home in the Pittsburgh neighborhood, west of the Downtown Connector from Turner Field.

The Bank of America Community Home Fund provided $2 million to fund the program that benefitted Simmons. The program is overseen by the Atlanta Neighborhood Development Partnership, Inc. ANDP is a non-profit organization created in 1991 to create and preserve affordable housing.

The program helps homebuyers who don’t have access to family wealth, or adequate savings, to cover a down payment on a residence. Sponsors unveiled it March 17 at an event in front of Simmons’ home.

Three options are available from a down payment assistance program funded by Bank of America Community Home Fund and administered by ANDP. Credit: andiphomes.org

ANDP’s president and CEO, John O’Callaghan, said the goal is to move the money quickly. The entire $2 million is to be allotted before autumn.

“We’ll take advantage of this spring’s home buying season and expend the dollars by this summer or early fall,” he said.

Terms include a residency requirement: A buyer must current reside in the city of Atlanta, or in one of four core counties – Clayton, DeKalb, Douglas, or Fulton.

Restrictions on eligible homes vary according to the guidelines for three separate options. Income restrictions apply, though they are more liberal if the buyer is a military veteran.

Details are available at this page on ANDP’s website. 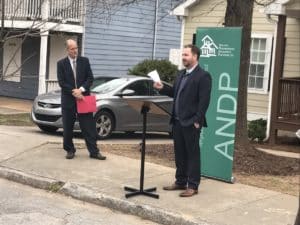 According to one bank officer, the program complies with a mission statement espoused by Brian Moynihan, BOA’s CEO: “We are here to help make financial lives better. Better by connecting our customers and clients to the financial solutions they need. And, better by connecting across our company to deliver those solutions.”

BOA has 5,800 employees in metro Atlanta who have contributed 47,328 hours of volunteer community service, according to Casey Daniel, vice president and home loans manager.

“Better financial lives,” Daniel said. “Helping our clients live a better financial life. It could be as easy as buying your next home. Saving on a transaction. ANDP – thanks for the partnership.”

As the event ended, Simmons was presented with a “Welcome” mat to place at the front door. The photo opportunity included the sponsors as well as Pittsburgh residents who came to welcome their newest neighbor.

“I’m almost at a loss for words,” Simmons said. “You do understand, but you don’t understand.” 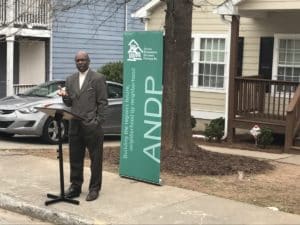 Atlanta’s Pittsburgh community was named to recognize its development as reminiscent of the Steel City in Pennsylvania, according to Ken Woods, chair of ANDP’s board of directors. Credit: David Pendered

“I’m almost at a loss for words,” new homeowner Shawn Simmons said. “You do understand, but you don’t understand.”  Credit: David Pendered