Atlanta media wait at Mercedes- Benz Stadium for the FIFA announcement of the 16 North American cities that will host the 2026 World Cup. (Photo by Maria Saporta.)

As dignitaries and members of the press gathered at Mercedes-Benz Stadium to celebrate the announcement that Atlanta would be one of 16 North American cities that would be hosting soccer matches for FIFA’s 2026 World Cup, longtime Georgia state Rep. Calvin Smyre (D-Columbus) shared a sentiment many of us old-timers were thinking.

“This reminds me of the Olympics announcement,” Smyre said of the day — Sept. 18, 1990 — when Atlanta was selected to be the site of the 1996 Summer Olympic Games.

There are defining moments in the life of every city. Hosting the Summer Olympic Games was one of them for Atlanta. Hosting the World Cup in 2026 will be another. 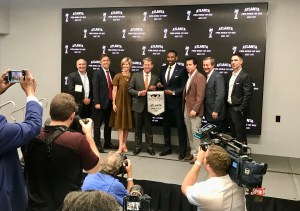 One — Atlanta has an opportunity to really seize the moment if FIFA selects the city to host the semifinal matches, and even more importantly if it selects the Georgia World Congress Center (GWCC) to be the home of the International Broadcast Center (IBC) for the World Cup. That would be the cherry on top. Getting the IBC would mean that for up to six weeks in the summer of 2026, Atlanta would be the center of attention as matches would be played in Canada, Mexico and the United States. FIFA is expected to announce its schedule and the IBC host city in about a year.

Two — as we led up to the Olympics, there was an unbridled energy to get our house in order — to make Atlanta and Georgia as polished as they could be when the world came to visit. The 2026 World Cup gives us the same opportunity to fix what needs fixing before company comes to town.

Business, civic and government leaders in Georgia, Atlanta and the region should galvanize to come up with an aspirational agenda on how to make our city as stellar as it can be. The World Cup can be a catalyst to improve our city for decades to come.

For starters, city and state leaders will be doing all they can to convince FIFA that Atlanta should host the semifinal matches and that it is the best home for the IBC. 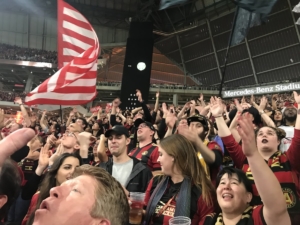 Exuberant Atlanta United fans cheer the soccer team to victory for the MLS Cup in 2018. (Photo by Maria Saporta.)

Darren Eales, president of the Atlanta United soccer team, is hopeful FIFA will follow the recommendations of the U.S. Soccer Federation, which recommended that Atlanta and Dallas host the semifinal matches. The speculation is that the opening match will be held in Los Angeles and that the final match will be held in the New York/New Jersey area. In all, 48 teams will participate in the 2026 World Cup, more teams than ever before.

“I think we are well-placed to get the semifinal match,” Eales said after the World Cup announcement on June 16.

“We want the semifinal matches,” said Katie Kirkpatrick, president and CEO of the Metro Atlanta Chamber, who said she would even love to see the final match played at Mercedez-Benz Stadium. “We are going to pitch ourselves for the best position possible.”

But the real prize would be getting the IBC.

Atlanta Mayor Andre Dickens said that if we got the “media headquarters,” announcers would say: “Live from Atlanta” during their global broadcasts.

“We can host them all — the press from around the world,” said Dickens, who outlined the city’s advantages — the proximity of the GWCC to the stadium, Hartsfield-Jackson International Airport, 14,000 hotel rooms, MARTA, a walkable hospitality zone and a passionate soccer community.

“FIFA has found out something that we’ve already known for a little while here in Atlanta — that Atlanta is a soccer town,” Dickens said. 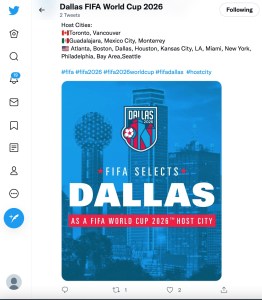 Atlanta competing with Dallas to host the International Broadcast Center for the 2026 World Cup. (Dallas sent out a celebratory tweet after being selected as a host city.)

Interestingly enough, Atlanta’s competition for the IBC is Dallas, which has proposed hosting the media center at Fair Park, the home of the Texas State Fair, reminiscent of what used to be our own Lakewood Fairgrounds.

“We put an initial ask for the International Broadcast Center,” said Eales, who said Atlanta’s bid featured the airport, the proximity to downtown venues as well as Atlanta being in the Eastern time zone, an advantage Atlanta has over Dallas.

“It’s between us and Dallas,” Eales said. “They were the host for the IBC in 1994. They have that in their favor.”

Atlanta was not a soccer town in 1994, so it’s not surprising that it was not a 1994 World Cup city. Few Atlantans were thinking about the World Cup because it was too busy getting ready for the 1996 Summer Olympic Games.

But 30 years later, the World Cup dynamics in Atlanta have changed.

Dan Corso, president of the Atlanta Sports Council, called the World Cup “the world’s biggest sporting event.” Planning for the event, such as establishing a host committee, will begin after Qatar hosts the 2022 World Cup in November. The economic impact of hosting between four to six World Cup matches is estimated to be about $415 million.

So how can we leverage the World Cup to make Atlanta a world-class city?

Let’s dream a little — and then let’s figure out how we can make those dreams come true.

Because I’m fortunate enough to have this platform, let me offer some suggestions. 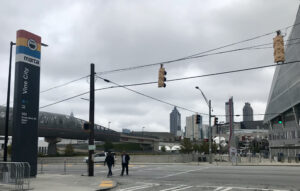 First, let’s transform Northside Drive in front of Mercedes-Benz Stadium as a world-class, pedestrian-friendly boulevard. That will take true public and private collaboration as well as a partnership between Atlanta and the Georgia Department of Transportation because Northside Drive is a state highway.

When asked if he would support improving Northside Drive, Gov. Kemp said: “I’m open to all roads in Atlanta being improved.”

The sad truth is that Northside Drive continues to serve as a moat between the historic  Westside communities and downtown Atlanta.

The entire Martin Luther King Jr. Drive corridor from the stadium to Joseph E. Lowery Boulevard needs to be reinvigorated by preserving the historic landmarks along the way — Gaines Hall, where W.E.B. Dubois was living when he wrote the book “The Soul of Black Folk,” the historic Paschal’s Restaurant and Motor Hotel, the homes of the late Grace Towns Hamilton — the first African-American woman to serve in the Georgia General Assembly — the Phyllis Wheatley YWCA building, the now-deteriorating Morris Brown Stadium, as well as other significant places along Sunset Avenue in Vine City.

All of those initiatives will require vision and partnerships from a multitude of public-private entities, and all of those would have lasting benefits well beyond the 2026 World Cup.

Note to readers: In the comment section below, please share your ideas of which aspirational initiatives we should work on between now and 2026. Let’s provide our community leaders with ideas — and then as a region, we can coalesce around priorities and work together to make them a reality.

Looking forward to hearing your ideas.

Previous Article
It had everything to do with necessity
Next Article
Moving Atlanta’s Parks Forward: A discussion with local environmental advocates about our city’s needs