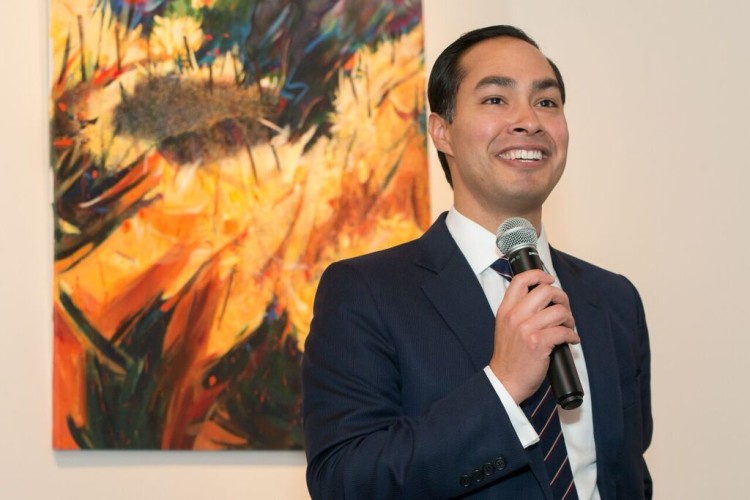 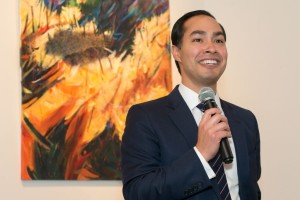 In fact, HUD Secretary Castro is such a compelling and attractive political figure he is reportedly on the short list of candidates under consideration to be named Hillary Clinton’s running mate as Vice President. Castro was the focal point of a festive Democratic fundraiser held recently in downtown Atlanta’s spectacular Zucot Gallery.

“Atlanta has always been a fantastically important city in our nation, whether we are talking about providing opportunity for emerging communities or African American professionals,” Castro told me during an exclusive interview. “The fact is much like my home state of Texas, Georgia is becoming more and more competitive and in the years to come it is Atlanta and the suburbs of Atlanta, and getting the vote out that are going to be so important to making sure that Georgia turns purple and then eventually blue.”

That’s right; the engaging Castro is akin to a political point guard who is touring the country rallying the Democratic faithful and independents. He was brought to Georgia to raise money for the Democratic National Committee [DNC] and to support Hillary Clinton’s presidential bid in a quixotic bid to upset the eventual Republican nominee.

“It’s very clear that with the events overseas and the events here at home recently is that we need serious leadership in the next president,” says Castro. “President Obama has done a tremendous job bringing our nation back from the brink of another Depression, restoring America’s goodwill around the world, making our country economically stronger and that’s what we need as well in the next president. So, I believe Hillary Clinton is the right person to do that.” 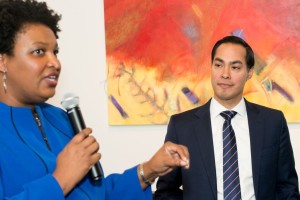 “Georgia is a state that is in play,” says the young, dynamic and articulate political powerbroker who is also gaining in national prominence. “We are one of the top trending states in the nation. And, while we didn’t win in 2014 we only lost by less than 200 thousand votes which is the closest margin since we lost power in 2002. What this signals and what the high caliber of attendance here signals is that the Democratic Party is taking Georgia very seriously and that the Hillary Clinton campaign is taking Georgia very seriously. Secretary Castro endorsed her early on and his willingness to come here, and this is not his first visit, signals his understanding of the complicated but also progressive nature of Georgia. We may not be blue yet but we’re on our way.”

But Georgia Democrats suffered serious setbacks in runoff elections recently that may be ominous indicators. Savannah Mayor Edna Jackson was beaten in her bid for re-election in a city that was seen as a Democratic stronghold by a white Republican Eddie DeLoach. Also in the state Senate race to replace Ron Ramsey, a Democrat from Lithonia, Republican Janice Van Ness upset Democrat Tonya Anderson. That surprise victory increases the Republican majority in the Senate to beyond super-status.

“Can we energize and excite our base as we did in ’08 and 2012? I don’t know if he can do it but we need to find a strategy and a personality that can do that. Ambition is not a platform, ambition is not a program. There are some people in this city who believe that being ambitious is the most important thing. Service is the most important thing.”

Donnie Hyder is a politically active young family man and entrepreneur who was an active member of the host committee for the Castro fundraiser. “I was very impressed with him,” says Hyder, a successful Southwest Atlanta real estate investor who raised several thousand dollars for the event. “He represents a new generation of political leadership which we need. He is new blood, a changing of the guard and a rising star.”

But Shelley Wynter, a self described traditionalist and conservative pundit who is also a member of the Georgia Black Republican Council, says Secretary Castro’s growing clout and popularity speaks to the power of the Hispanic vote within the Democratic Party.
“Whether Castro is a savior for Democrats in Georgia or throughout the South remains to be seen,” he says. “But calling him a darling or future of the party means the African American community is no longer in vogue and valued. Democrats got a new bitch they’re banking on.” 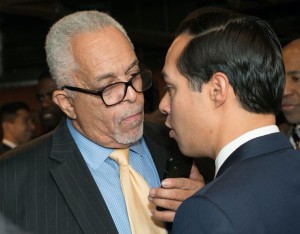 “I love Secretary Castro,” says Kwani Carson, the top aide to Birmingham Mayor William Bell. “I am very excited about the energy that he brings. I am glad he is able to come to the South. We have plenty of red states here but we also have plenty of blue counties and blue cities, so I’m good with being a blue dot in the red square.

Castro, meanwhile, remains above the fray. When asked would he likely be the next Democratic Vice Presidential nominee before being whisked away by aides, Secretary Castro smiled coyly and said: “Oh no I doubt it, I doubt it.”