ATLANTA – City of Atlanta officials and leadership from the Atlanta Downtown Improvement District (ADID) and Trees Atlanta observed Georgia Arbor Day (February 18) with a special tree planting to officially launch the Downtown Urban Tree Planting Plan. Dignitaries and community partners gathered near the site of the very first Trees Atlanta planting on Carnegie Way for the ceremony. Those in attendance were: 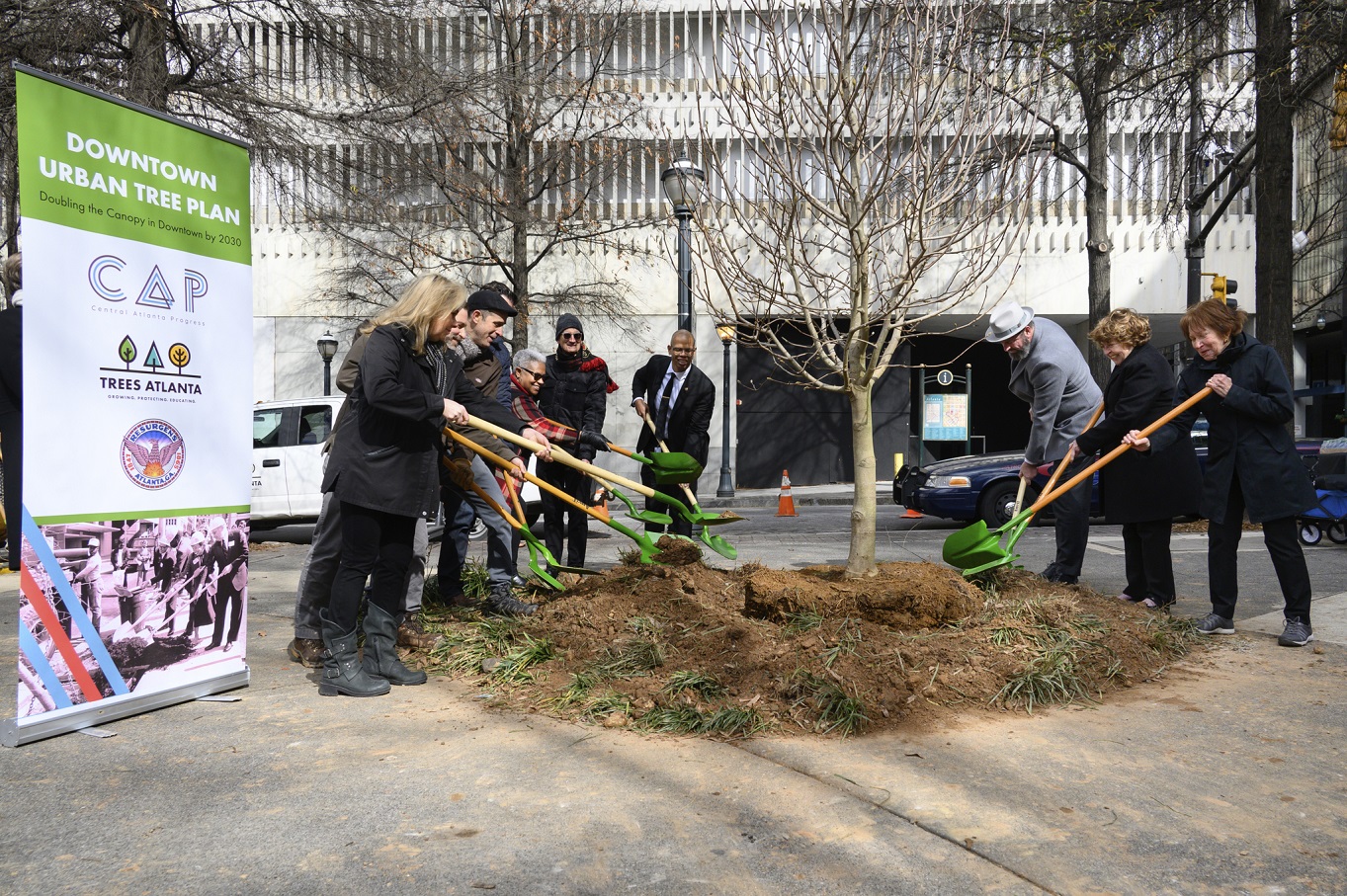 At the start of the planting event, A.J. Robinson, President of CAP and ADID, told participants that the Downtown Atlanta Urban Tree Planting Plan is the blueprint for action and implementation for the next decade. “The Plan aims to double tree coverage by planting upwards of 8,000 trees phased over ten years,” said Robinson. He added, “Trees will be planted along Downtown’s streets, as well as on underutilized land. By enhancing the user experience on a human scale, these catalytic efforts will create a healthy, comfortable, and safe urban environment for both residents and visitors alike.”

Central Atlanta Progress and Atlanta Downtown Improvement District (CAP/ADID) commissioned the preparation of this Planting Plan in partnership with Trees Atlanta. Efforts were spearheaded by CAP/ADID, collaborating with Trees Atlanta and the City of Atlanta. The full report and associated materials represent the collaborative and multi-disciplinary effort necessary to bring this vision to reality.

Connie Veates, Co-Executive Director of Trees Atlanta noted, “Downtown is where Trees Atlanta planted the very first trees that founded our organization in 1985. Our mission to improve Atlanta’s urban canopy began here with Atlanta’s community and business leaders, including Central Atlanta Progress, Junior League, and the Commissioner of Parks at our side. We are now embarking on the next generation of significantly more trees for Atlanta’s downtown district.” The project’s impact on surrounding residential neighborhoods was highlighted by Greg Levine, Co-Executive Director of Trees Atlanta, “Downtown Atlanta has the lowest tree canopy in the entire city. In time, these 8,000 trees will provide tremendous health, environmental, and economic benefits to Atlanta’s central business district, and importantly, will also greatly increase access to the benefits of trees to the communities closest to Downtown.”

About Trees Atlanta:  Trees Atlanta is a nonprofit community group that protects and improves Atlanta’s urban forest by planting, conserving, and educating. Since its founding in 1985, Trees Atlanta has planted over 150,000 trees throughout metro Atlanta with volunteers and partners to ensure environmental, social, and economic benefits of trees are available and abundant for the health and well-being of all communities. Trees Atlanta plants over 7,000 trees every year, including helping to design, install, and maintain the Atlanta BeltLine Arboretum; educates youth and adults through classroom lessons and hand-on training; and improves forested land by removing invasive species and restoring the native plant ecology of the area. Trees Atlanta is a trusted leader in organizing and demonstrating stewardship of our urban tree canopy. To volunteer and to learn more about the organization, please visit: treesatlanta.org.

MORE INFO:  Stay engaged with Central Atlanta Progress and the Atlanta Downtown Improvement District by visiting AtlantaDowntown.com and following us on social media at @DowntownAtlanta on Facebook, Twitter, and Instagram