Cammie Wolf Rice reads a passage from her book "The Flight, My Opioid Journey" during an event at Emory on Sept. 18, 2022. (Photo by Maria Saporta.)

On that day, Christopher Wolf would have turned 39 years old.

Instead, during an event at Emory University, Christopher’s mother, Cammie Wolf Rice took us all on an emotional journey no parent ever wants to take.

“There is no preparation in life for the death of a child,” Cammie told a gathering of about 250 friends, colleagues and family members at the release of her book: “The Flight, My Opioid Journey.” 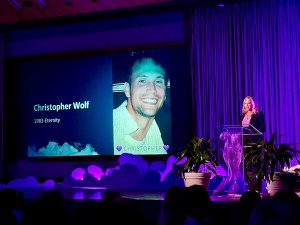 Cammie Wolf Rice shares her flight on the death of her son, Christopher Wolf, on his birthday, Sept 18 (Photo by Maria Saporta)

Throughout the program — as well as in her book — Cammie recalled in agonizing detail the roller coaster ride she went on when her son was prescribed opioids to take care of the pain he suffered after several surgeries, his subsequent addiction and death at the young age of 32.

The stage of the Woodruff Health Sciences Center auditorium had been turned into a flight simulator to give those in the audience the sense they would be taking a trip to the various levels of grief that a parent endures when losing a child. Ushers were dressed as flight attendants, and the color motif was purple — Christopher’s favorite.

John Rice, Cammie’s husband of 15 years, said the title of the book was a metaphor for the flight that they took through several rehab programs and counselors as Christopher tried to break free of his addiction to opioids.

Then on the night of Feb. 25, 2016, when Cammie and her son were on a trip to Cambodia to support the Cambodian Children’s Fund and the Rice Academy, Christopher slipped out and purchased heroin, dying the next day.

John Rice, retired vice chairman of General Electric, opened up the program with sobering statistics. Not so long ago, opioids accounted for about 30,000 deaths a year. Then that number began to spike to an average of 80,000 deaths a year. 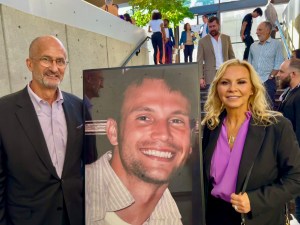 John and Cammie Rice flank a larger than life photo of the late Christopher Wolf, who died as a result of opioid addiction in 2016. (Photo by Maria Saporta.)

“It’s getting worse,” said John Rice, who serves as chief financial officer of the Christopher Wolf Crusade. “Last year, there were 107,000 drug-related deaths. We have a mountain to climb.”

Another statistic. Every nine minutes, someone dies from a drug-related death.

“There’s no word in the English language that explains the death of your child,” Cammie said in a video. “Losing Christopher was an out-of-body experience.”

And then, while everyone in attendance could feel the angst, Cammie switched the conversation.

“We are going to talk about solutions,” she said, adding that first they had to talk about the pain. The first step to a solution was starting the Christopher Wolf Crusade on Sept. 18, 2018.

As Cammie said, you never recover from the death of a child. You just learn to channel it. In the audience were about a half dozen mothers who also had lost children to drug-related deaths — cementing a bond of pain and unconditional love among the women.

“I think our children died so other people can live,” Cammie said.

The solution? Provide patients with all the information and tools Christopher didn’t have when he was trying to cope with pain.

Instead of just being prescribed opioids, the Christopher Wolf Crusade is advocating that patients meet with a “Life Care Specialist,” who can talk to them about pain management, the risk of addiction, the proper use and disposal of medications, mental health issues and post-operative care. The Life Care Specialist was modeled after “Child Life Specialists,” who are prevalent in children’s hospitals. 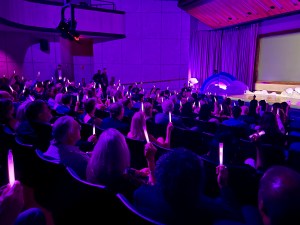 During the Sept. 18 event, audience members were asked to shine purple glow sticks in honor of Christopher Wolf. (Photo by Maria Saporta.)

CWC embarked on a two-year research trial with Grady Hospital, one of the busiest traumatic injury hospitals in the United States, on how “Life Care Specialists” could help patients manage their pain. The early results are promising. There was a 25 percent reduction in the use of opioids among patients seen by a Life Care Specialist and a 30 percent referral rate for other issues, including food and housing insecurities, domestic violence and other issues.

During the program, Dr. Mara Schenker, chief of orthopedics at Grady Hospital, admitted that she hadn’t recognized that she was part of the problem. Her unit had among the highest opiate prescribing rates at the hospital.

“We are really focused on getting life care coaches in every hospital,” Cammie said.

Towards the end of the program, Cammie then dropped a bombshell.

“I’ve never shared this publicly before,” she said.

Her brother, Roger Alan Wolf II, died May 3, 2021, as a result of an overdose of Xanax, partly due to anxiety related to the Covid pandemic.

“Now you’ve lost your son and your brother,” Cammie admitted to those in attendance, adding that one of the greatest challenges is fighting the stigmas related to mental health and addiction. “There’s so much judgement. It’s the silence that hurts us.”

At the end of the program, everyone was given a copy of the book “The Flight, My Opioid Journey,” in a flight bag that included materials on how to use the Narcan nasal spray for someone who may be suffering from an overdose. It also included a “healing wheel” of how a Life Care Coach can work with patients during and after hospitalization.

As John Rice summed it up: “We have focused more on prevention rather than treatment.”

How the world turns.

In June 2021, I had a bad bicycle accident — breaking my ankle and my collarbone. Fortunately, I was taken to Grady Hospital. 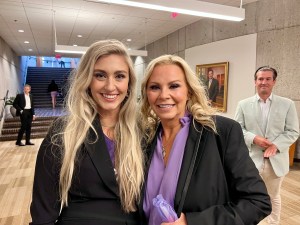 Bailey Barrell with Cammie Wolf Rice at the Sept. 18 event in honor of Christopher Wolf. (Photo by Maria Saporta.)

One of my Life Care Specialists was Bailey Barrell, who I did not realize at the time was Cammie’s niece. It’s only while I was reading the book that I realized Bailey was with Christopher and Cammie in Cambodia during that tragic time of his death.

Again, life’s web with its intricacies and coincidences showed me once again how interconnected we all are.