Owners who in 2019 paid $575,000 for a house in Atlanta’s Old Fourth Ward neighborhood have asked the city to allow construction of a two-story accessory dwelling unit 15 inches from the property line. The current setback is 20 feet. 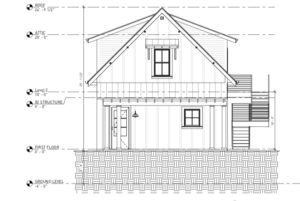 This rendering is in the application for permission to build a carriage house within 15 inches of a property line Atlanta’s Old Fourth Ward. Credit: Atlanta

The application is among a growing number of requests for zoning variances to allow a second dwelling to be built on a lot designed to serve one house.

The number of applications for variances to enable construction of accessory dwelling units appears to be on the increase in recent months, based on a review of agendas for the city’s Neighborhood Planning Units. ADUs have previously been called granny flats and carriage houses.

Atlanta Mayor Keisha Lance Bottoms’ administration announced in December 2020 its support for zoning changes intended top promote construction of ADUs on land now occupied by a house. ADUs are presented as a way to ease the shortage of dwellings affordable to those earning salaries of teachers and firefighters. The city’s concept is to allow the owner of a house subdivide the lot, build a dwelling that will be affordably priced, and rent the ADU or sell it – with a clear title to the property on which it was built.

In the case pending 379 Pine St., NE, in Old Fourth Ward, the second house is called a carriage house and the request is to “construct a new 2 sty ADU.” It would be built in the backyard above a proposed parking pad, and accessed from an alley behind the backyard. The application mentions hardships but doesn’t mention the recent purchase of the property or renovation of the dwelling.

The application doesn’t mention that the property was purchased Jan. 31, 2019, which is noted in Fulton County tax records. Two owners are listed in tax records. The variance cites one owner.

The application does indicate the owner will incur hardship if the variance is denied:

In addition, the variance application states the unit won’t create any issues in the neighborhood:

The application provides this description of the project:

The variance is needed to build the second house because the original lot is shaped like a slice of pie and doesn’t appear to have been intended to provide space for a second house. The application observes:

Atlanta’s Board of Zoning Adjustment is slated to hear this variance request and a number of others at its meetings in March. The BZA is a quasi-judicial entity has final say in the city over variance requests. Rulings can be appealed to Fulton County Superior Court.