That’s what I remember the most about Ray Liotta who died in his sleep last week, age 67, while making a movie in the Dominican Republic.

Those eyes, yes, and “Goodfellas,” Martin Scorsese’s jittery mob masterpiece that made Liotta star. He played Henry Hill, the film’s narrator and the audience’s surrogate, a would-be wise guy who almost, but never quite wised up (part of the picture’s genius). 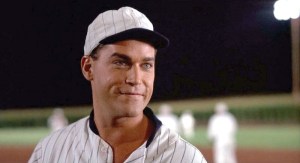 Liotta had done memorable work before “Goodfellas.” The ex-con psycho who crashes Melanie Griffith and Jeff Daniels’ love story in Jonathan Demme’s “Something Wild.” An earnestly ethereal Shoeless Joe Jackson in “Field of Dreams,” that enduring fantasy of baseball and the best of the ‘60s. And soap devotees still remember his years on “Another World,” as the sweeter-than-sweet Joey Parini.

That was Liotta’s particular gift. He could play a psychopath, then turn on a dime and play the most decent guy in the room. A gentle intern who takes care of his slow-witted fraternal twin (Tom Hulce) in “Dominick & Eugene.” Then, a sadistic cop fixated on Madeline Stowe in “Unlawful Entry.”

Liotta made over 80 movies, as well as countless TV appearances. And yet, as one journalist wondered, why didn’t “Goodfellas” make him a star? Oh, it made him a name, no question. But as you sift through his work, you come up with a list of almost-there titles. Of movies that had some impact, but never on the same level as “Goodfellas.” Movies like “Blow,” “Narc,” “A Place in the Pines,” “Copland,” “The Many Saints of Newark,” even “Hannibal” (in which he eats his own brain…). 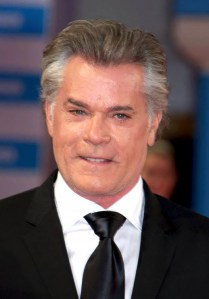 Ray Liotta in 2014 (Courtesy of Wikipedia)

That’s not to say these films don’t have their fans. But again, it all comes back to “Goodfellas” which looms over Liotta’s career like some celluloid overlord.

So…. why didn’t Liotta ever work for Scorsese again? He got asked that a lot and his reply was always an entirely reasonable, “I don’t know. You’d have to ask him.”

Reporters didn’t tend to ask Scorsese the same question; there was too much else to talk about. But when the director learned of Liotta’s passing, he called him “so uniquely gifted, so adventurous, so courageous as an actor.”

Strange footnote: Apparently, the real Henry Hill, who was still in the Witness Protection Program, called Liotta after “Goodfellas” was released in 1990. The first thing he said was, “Thanks for not making me look like a scumbag.”

Liotta replied, “Are you serious? Did you not see the movie? You were cheating on your wife; you were dealing drugs when your crew told you not to…”

Hill hung up the phone.