In an effort to address a growing need to serve people who suffer from substance abuse, the Addiction Alliance of Georgia was officially launched on Wednesday.

The Addiction Alliance, a powerful and “historic” partnership between Emory University and Minnesota-based Hazelden Betty Ford Foundation, has been in the works for more than two years.

Both organizations held a virtual community meeting to make a public announcement to say they had signed an agreement to collaborate and jointly seek public and private community partners throughout Georgia to advance addiction-related clinical care, education and research.

“We have partnered with other healthcare organizations before but never one as outlined like this partnership,” Motu said during the gathering. “It’s unique from the perspective of our 70-year history.”

The relationship is envisioned to be extensive and far-reaching by providing clinical treatment, advocacy, education and research. The Addiction Alliance also intends to partner with numerous other organizations in the medical community – especially those in the fields of mental health and substance abuse.

“We have a drug and alcohol epidemic within the COVID pandemic,” said Tom Johnson, the retired CEO of CNN and a civic leader on issues of depression and addiction.

That was confirmed by Judy Fitzgerald, commissioner of the Georgia Department of Behavioral Health and Developmental Disabilities, who said the state is “so grateful to be part of this unique partnership.”

According to federal data, more than 20 million Americans needed substance use treatment in 2019, but only about 1 in 10 received the specialty health care they needed. Addiction to alcohol, opioids and other drugs is a leading cause of disease, disability and premature death in America, with drug overdoses alone resulting in a record 72,000 lost lives in 2019.

Amid the COVID-19 pandemic, the national overdose epidemic is worsening as deaths spike further. One analysis shows a 13 percent increase in drug-related deaths nationwide during the first half of 2020.

In Georgia, the ninth most populous state with 10 million residents, the Georgia Department of Health said overdose-related emergency room visits in the state have escalated significantly since the pandemic began. Fentanyl-related opioid overdose deaths were 17 percent higher from December 2019 through April 2020 than the previous five-month period.

“The addiction and mental health conditions of too many Americans have reached a crisis,” Emory University President Gregory Fenves said in a statement. “And it is a crisis exacerbated by a pandemic that has increased anxiety, isolation and economic hardship.” 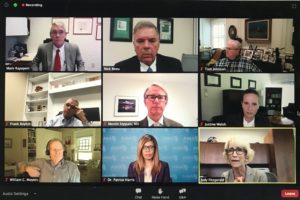 Fenves went on to say that thanks to the contributions of concerned donors, the larger community and government agencies, Emory and Hazelden Betty Ford are ready to take on these challenges throughout our state.”

As envisioned, the partnership will be in two phases, according to Dr. Mark Rapaport, chair of the Emory University School of Medicine’s Department of Psychiatry and Behavioral Sciences and chief of psychiatric services at Emory Healthcare.

Phase Two, which is expected to be implemented in the next three to five years, envisions the development of a new detox and residential addiction treatment facility on or near the campus of the Emory Brain Health Center.

“In terms of the second phase, this partnership will require $40 million to $50 million to create a world-class addiction facility,” Rapaport said.

To reach this point, Motu said the two organizations had “very intense discussions” – initially signing a memorandum of understanding last year which was celebrated at a Cherokee Town Club event in February.  Eventually the contract was signed on July 24.

“It took a lot of time, but generally speaking, this is a strategic partnership,” Motu said, adding that whenever they “got into deep discussions” on the contract negotiations, they realized that were tied together through a common mission.

“Although this took a long time, it allowed us to form the culture of the Addiction Alliance of Georgia,” Rapaport said. “What really sold me on this project, on Jan. 30, 2019, a small group of us went out and spent time with the leadership of Hazelden Betty Ford Center. What we saw there were a number of things People who shared the same values we had” – a place that was committed to caring for people suffering from addiction and including their family members in the treatment. “The quality is phenomenal.” 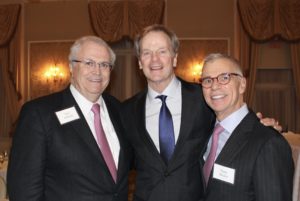 Tom Johnson helped launch the idea of the partnership in early 2018 when he met Frank Boykin, CFO of Mohawk Industries whose son was struggling with heroin addiction, at the OK Café in Buckhead.

Johnson reached out to a close friend – William Cope Moyers – someone he described as an adopted son. Moyers, who formerly worked at CNN and is a vice president at Hazelden Betty Ford.

Moyers, who was part of Wednesday’s Zoom call, shared his story.

“Twenty-six years ago, I was locked in the throes of an occurrence of alcohol and crack cocaine,” said Moyers, who was holed up in an apartment in Midtown at the corner of North Avenue and Boulevard. “I couldn’t get out of there. I couldn’t have gotten out of there without the community of Atlanta.”

Boykin said that initial encounter has led to a “venture I believe has the potential to be a model.”

Moyers agreed by saying: “What’s happening here is a direct reflection of Atlanta and the entire state of Georgia working for people who need help.”