Anyone living near the Atlanta BeltLine’s Northeast Trail will be seeing changes to the pathway during their morning walk or bike ride. 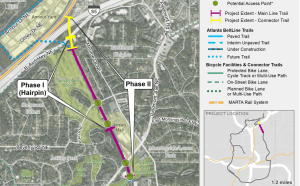 Plans for Segment Two of the Northeast Trail. (Map courtesy of Atlanta BeltLine)

The Atlanta BeltLine team is moving forward with construction along Segment Two of the trail, which stretches from Westminster Dr. to Mayson St. Notably, this section will be the first to provide a direct connection to Piedmont Park.

Phase Two covers 1.2 miles, spanning from the Westminster Dr. culdesac at the northern tip of Piedmont Park to Buford Highway by Ansley Mall.

The Northeast Trail, which is paved in some parts and gravel in others, will eventually connect the northern end of the Eastside Trail to the Lindbergh MARTA station. 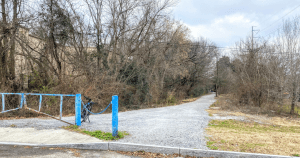 The entrance at Westminster Dr. will eventually provide a paved, direct connection to Piedmont Park. (Photo by John Becker, courtesy of the Atlanta BeltLine)

In addition to a new connecting trail along both ends, the plans for Segment Two include reworking parts of the trail, installing lighting and cameras, and restoring Timber Bridge at Clear Creek by Piedmont Park.

Meghan Injaychock, senior landscape architect and Segment Two project manager, said some portions of the trail will be shifted over to account for the light rail transit system that will eventually accompany BeltLine’s walking and biking paths. The future transit network requires a minimum of thirty-two feet.

However, to successfully move portions of the trail, paired with the need for stormwater improvements, 126 trees are on the chopping block.

Injaychock is hopeful that a few trees will be saved, particularly “a couple of larger oaks,” but that removal estimation stands for now. 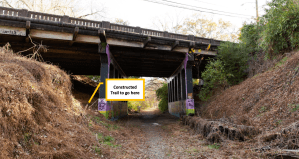 The trail by the Piedmont Road Bridge, and other locations along Segment Two, will move to the side to accommodate future construction. (Image courtesy of the Atlanta BeltLine)

“We’re having to move the trail to be out of the way of transit. There’s something called throwaway trails where we know we’re saving trees now, but when transit comes, they’re going to move the trail, and the trees will eventually go,” Injaychock said. “So [instead], we decided to put the trail in its permanent alignment.”

The BeltLine team will remove invasive species, like privet and mimosa, from the surrounding areas to help mitigate negative impacts on the natural area.

The BeltLine will also work with Trees Atlanta to plant 1,255 trees along the trail. The process will begin during the next planting season, from December to February.

In some cases, the new trees will be healthier than those formerly in their place. In other instances, the removal represents the continued loss of Atlanta’s mature tree canopy.

“Keeping a mature canopy is something we strive to do where we can do it. Sadly, in a lot of the [Ansley] corridor, the tree canopy is not in the best shape,” Injaychock said. “A lot of [the trees] have been falling due to erosion issues or invasives, and ivy takes them down. It’s pretty sad, but we try to control our corridor as best we can, with the help of Trees Atlanta and volunteers.”

Mostly native species will be planted — magnolias, oaks, hickory and pine — or those that thrive in urban soils and the Piedmont region where Atlanta resides.

Construction is slated to begin in May, wrapping up in the fall of next year.

If you’re interested in learning more about Segment Two of the BeltLine’s Northeast Trail, click here to watch a recent public meeting.