Atlanta’s seven-month effort to sign concessions contracts at the airport evidently collapsed over paperwork problems in just a few significant portions of the process.

The city took from five to six weeks to determine that it would exercise its most extreme response possible to proposals that Atlanta COO Peter Aman said were non-responsive. The city could have rejected just portions of some or all proposals, according to the city’s Request for Proposals.

The RFP language on cancellation states:

“The city reserves the right to cancel any and all solicitations and to accept or reject, in whole or in part, any and all Bids/Proposals when it is in good cause and in its best interest.”

The process started with an Industry Day Jan. 19 and culminated with a pre-bid conference April 5, though the city subsequently amended its RFPs. Proposals were due on a rolling deadline that included July 21, July 25 and July 27.

Delta spokesman Trebor Banstetter wrote in an email Tuesday the airline supports the cancellation and restart of the procurement process. The airline is paying special attention to the planned opening of the international terminal in Spring 2012.

“We’re 100 percent supportive of the Mayor (Kasim Reed) and (airport General Manager) Louis Miller’s decision, as Delta wants to ensure that the new international facility offers the highest-quality, highest-value concessions for international travelers departing from, arriving to and connecting through Atlanta,” Banstetter wrote.

A review of a spread sheet the city released Sept. 2 shows the following areas account for a major portion of packages that were deemed non-responsive to the city’s requests for proposals. 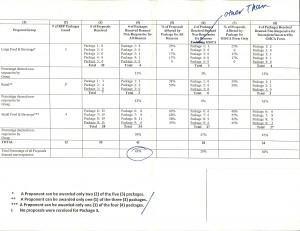