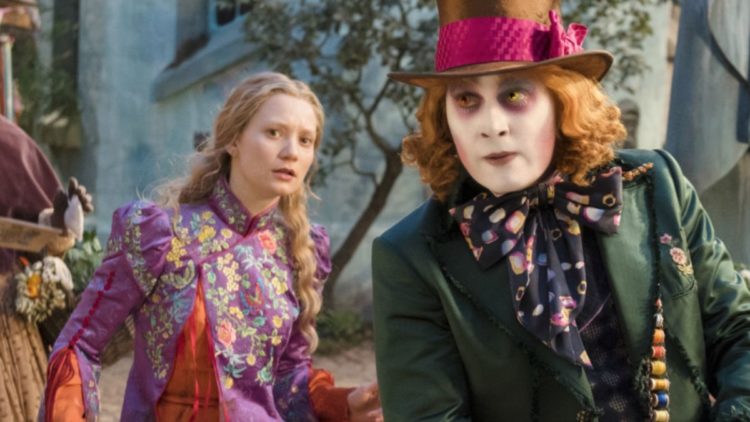 'Alice Through the Looking Glass' provides Johnny Depp another chance to slather on the fanciful make-up. Mia Wasikowska is cast, again, as Alice. Credit: impulsegamer.com

So many of us read “Alice Through the Looking Glass” when we were young that that I’m sure we all remember the famous opening scene where Alice, having taken over as captain from her deceased father, steers her sailing ship through a deadly storm.

Oh, you don’t?  Well, brace yourself because that’s how “Alice Through the Looking Glass” begins. And that’s only the first of repeated offenses this blasphemous atrocity commits against Lewis Carroll, to say nothing of billions of “Alice” fans. 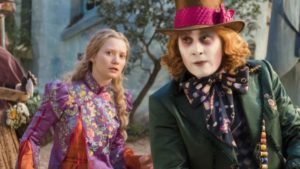 ‘Alice Through the Looking Glass’ provides Johnny Depp another chance to slather on the fanciful make-up. Mia Wasikowska is cast, again, as Alice. Credit: impulsegamer.com

This sorta’ sequel to Tim Burton’s almost-as-wretched “Alice in Wonderland” again casts Mia Wasikowska as a rather adult Alice (aged from around seven or eight to around seventeen or eighteen or even older) and Johnny Depp as the Mad Hatter. Also returning are Anne Hathaway as the White Queen and Helena Bonham Carter as the Red Queen – though, in this picture’s parlance, they may as well be Glinda the Good and the Wicked Witch of the West.

Aside from the characters’ names and the way that Alice enters this alternate universe, i.e., through a mirror, “Looking Glass” has just about nothing to do with the book. Upon her return to Wonderland, Alice learns from the White Rabbit, the March Hare and a character or two Tim Burton simply invented for the first picture (including, inexplicably, a hound dog) that the Mad Hatter is not himself.

His melancholy – which is, apparently, life threatening – is somehow tied to losing his family years ago, plus some Daddy-never-loved-me issues. It matters not. The plot point is, someone (Alice, of course) must figure out how to change the past. So she seeks out Time (Sacha Baron Cohen), a self-important villain who may be able to help Alice travel backwards and save the Hatter’s family (and prove Daddy loved him after all). 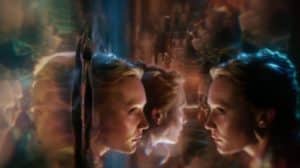 The special effects in ‘Alice Through the Looking Glass’ do little but attempt to conceal a moronic narrative. Credit: artofvfx.com

As was true of the ill-fated and similarly over-cooked “Pan,” the rip-roaring special effects serve little purpose, other than to attempt to obscure a narrative so moronic that it’s not only offensive to Carroll fans, but confusing to anyone, “Alice” aficionado or not.

“Looking Glass” exists for two reasons. First, it allows Depp, whose career is swiftly turning deadly, to yet again slather himself in fanciful make-up and swan around as the Hatter. That he is now 50-something only makes his fey mannerisms – one cannot truly call it a performance – that much creepier.

Reason No. 2 is more Hollywood Business-as-Usual. The Burton movie, released in 2010, made oodles of money. So, even though Burton bowed out of the sequel (replaced by Muppet Meister James Bobin), Disney simply couldn’t resist the lure of more of the same.

Well, they got more of the same. And ticket-buyers either decided Fool-Me-Once-Shame on-You/Fool-Me-Twice-Shame-on-Me. Or, Depp’s appeal has diminished more than anyone could have predicted.

Maybe they should’ve just called the movie “Take the Money and Run,” since that seems to be its true narrative.  Except, given that the picture has tanked spectacularly, there isn’t anywhere as much money as everyone figured there’d be. So now, the execs are just running. After all, the best way to deal with a flop in LaLa Land is get as far away from it as you can.