‘Aloha’ – best part of the movie is the setting of Hawaii 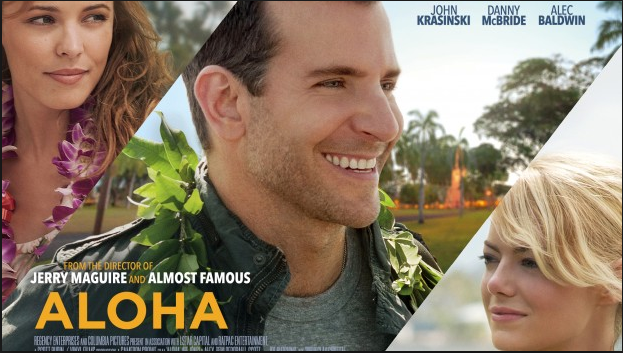 In “Jerry Maguire,” Cameron Crowe had us at hello.

In “Aloha,” alas, he doesn’t have us at hello or goodbye.

Or anything in between.

Crowe is known for movies that don’t fit into an easily identifiable mold. Movies like “Almost Famous,” “Say Anything” and “Fast Times at Ridgemont High.”

And everybody has to make room for Hawaii, which — as was true in George Clooney’s “The Descendants” — is as much a theme as it is a setting.

Cooper plays a former fighter pilot, wounded in Afghanistan, who has sold his soul to a greedy zillionaire (Murray). Said zillionaire’s nefarious scheme is  — with Cooper’s help — to place his own personal nuclear weapon in space (It’s being done under the more benign guise of a telecommunications satellite.) 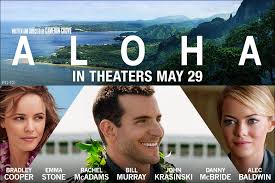 Just how much the military — embodied by a loud Baldwin and an ineffectual Danny McBride — knows and when they knew it is beside the point. Cooper is the film’s moral fulcrum.

Stone is a gung-ho Air Force pilot whose manner is as crisp as her uniform.  She’s been assigned to shadow Cooper, which she does with comic (sometimes) efficiency.

McAdams enters the picture as Cooper’s ex-love, now married to Krasinski.  They have a strained marriage and two kids, one of whom has a suspicious birth date.

In the film’s funniest scene, Cooper and Krasinski demonstrate how to communicate in man-speak, i.e., without ever saying a word. Another good patch comes when Cooper goes to visit the self-proclaimed King of Hawaii (Dennis Kanahele), who lives under an upside-down flag (symbol of a country in distress) and wears a t-shirt that says something like, “Hawaiian by birth; American by force.”

There’s nothing inherently wrong with any of this — except everything’s wrong with the way it comes off on screen. And when a major plot point hinges on a chance encounter with some video shot by an irritatingly precocious 10-year-old, well, you know something’s awry.

Apparently, “Aloha” has a troubled history.  A postponed release, a long gestation period (the original leads were Reese Witherspoon and Ben Stiller), an unfavorable mention or two in those infamously leaked emails at Sony.

The picture’s original title was “Deep Tiki.” Maybe the producers changed it because they knew they were in Deep D** S**.