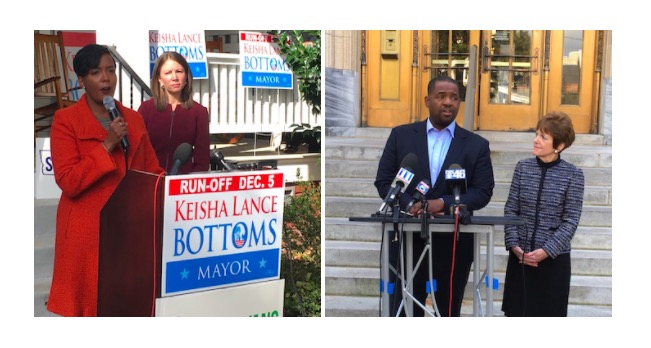 As the clock ticks closer to the Atlanta mayoral runoff election, both Bottoms and Norwood seem to be all over the city all the time with forums and announcements.

Bottoms went to the Midtown office of gubernatorial candidate Stacey Evans on Tuesday morning for a short press conference.

Evans said that Bottoms is the Democrat in the race.  “And at a time when Washington is as unpredictable and dangerous as ever, I want a leader with an unflinching commitment to fight back and to call it like it is,” said Evans.

She also said that she and Bottoms share values and both grew up in a way that taught them education is everything and that it can change lives. Evans said they’re both committed to making college and technical education available to all who want it.

After that, Bottoms was scheduled to receive endorsements from some of Atlanta’s faith leaders.

A few hours later, Norwood stood on the steps of City Hall Downtown with Ceasar Mitchell, the outgoing City Council President who finished the first round of the mayoral election with about 9 percent of votes.

“The point is,” said Mitchell, “who’s going to roll up their sleeves and deal with what’s going on in our community … with what I see as a disintegration of unity in our city … and put aside the vitriol and ensure that every young person brought in this city can grow up and have the promise of tomorrow without being part of a political fight?”

He said it’s a nonpartisan race and that Norwood has a progressive record.

Mitchell is just the second among top first-round finishers to endorse a mayoral candidate. Cathy Woolard, Peter Aman and Vincent Fort finished with more votes than Mitchell. None has made an endorsement, though Woolard is going to host a forum with Bottoms and Norwood next week.