The entire Ansley Park neighborhood and a former brick factory infamous for abusing prisoners are among the “Places in Peril” on the Georgia Trust for Historic Preservation’s annual list of the 10 most endangered historic sites.

The 2022 list — announced Nov. 17 and dated to encourage rescue actions in the coming year — includes statewide properties, from schools to a cemetery to a fairground. Several are rooted in African American history that is an increasing focus of today’s historic preservation philosophy. 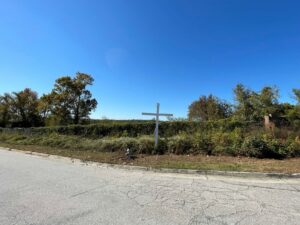 The former site of the Chattahoochee Brick Company. (Photo by Georgia Trust for Historic Preservation.)

This is the Trust’s 17th annual list, and the organization is touting its role in spurring or adding momentum to local preservation efforts.

“To date, 95% of past Places in Peril sites are still in existence,” said Mark C. McDonald, the Trust’s president and CEO, in a press release. “We hope the list will continue to bring preservation solutions to Georgia’s imperiled historic resources by highlighting 10 representative sites.”

The Atlanta-headquartered Trust creates the list by accepting nominations from the public. To make the list, sites must be listed or eligible for listing on the national or state registers of historic places, face a “serious threat” to their existence or integrity and have a “demonstrable level of community commitment and support for the preservation.”

Two of this year’s 10 “Places in Peril” sites reflect the treatment of prisoners. Another one not on the list is the Atlanta Prison Farm, which has been in the news for a controversial plan to partly redevelop it as a public training center, with planners are consulting the Atlanta Preservation Center on saving historic resources. The Trust says it received no nominations for the Prison Farm for this year’s “Places in Peril.”

The following are the Trust’s details of this year’s “Places in Peril” and the threats they face.

This 117-year-old Midtown neighborhood is on the National Register of Historic Places but is seeing rapid redevelopment. The “Places in Peril” listing is a direct shot at the scourge of so-called infill development, which the Trust says is taking the neighborhood near “a point of no return.”

The neighborhood was created in 1904 by developer Edwin P. Ansley as a then cutting-edge attempt to suit the new automobile culture with wide but curving streets. It features many historic houses and apartment buildings. However, while the neighborhood is on the National Register, an essentially honorary designation that provides some tax-credit eligibility, it is not on the City of Atlanta list, which would create direct protections from demolition and alteration of homes.

“Without that protection and review, the past decade has seen many historic, architecturally significant homes demolished and replaced with insensitive infill,” says the Trust. “Nearing a point of no return, the district risks losing its National Register designation — and the valuable incentives that come with it — if too many contributing buildings in the Ansley Park neighborhood are lost, and the city risks losing some of its finest architectural heritage.”

This former brick-making site at 3195 Brick Plant Road in Northwest Atlanta was the focus of the city’s biggest historic preservation controversy this year. The Norfolk Southern railroad company planned to build a facility on the site, but withdrew under pressure from Mayor Keisha Lance Bottoms and advocates for memorializing the site’s legacy of using prisoner labor as part of a notoriously racist and abusive system called “convict leasing.”

The brick company was founded in 1878 by former Mayor James English and used the convict leasing system for workers. In convict leasing, the government forced prisoners to work at private businesses, which paid the state, creating a financial incentive for people to be jailed on petty or dubious charges. Prisoners were often treated with cruelty or neglect for their safety. Most, but not all, of the prisoners were Black men, leading historian Douglas Blackmon to dub it one of the South’s forms of “slavery by another name.”

Forced labor continued at the brick company until the early 1900s and the overall facility closed about 20 years ago, leaving a vacant lot. Various advocates, including descendants of some of those forced to work there, have called for the site to be turned into a memorial.

“The land is currently zoned for industrial use, and the brick company structures have already been lost to prior development attempts,” says the Trust. “Many people, including descendants of Chattahoochee Brick Company convicts, consider the site hallowed ground. Preservation of the site will generate healing, foster dialogue and lead to an understanding of a difficult chapter in Atlanta’s history. While the buildings and kilns are gone, the site retains significance worthy of recognition and protection.”

The century-old city of Gay in Meriwether County is known for its “Cotton Pickin’ Fair,” held in May and October. The fair was established in 1972, using 11 historic structures from a former cotton gin and peach-packing complex.

“Because the grounds are active only two weekends annually, the structures remain largely abandoned and neglected throughout the year,” says the Trust. “With no prior effort to properly preserve the buildings, there is potential for deterioration and damage to the grounds in the off-season. Additionally, existing zoning in Gay does not provide protection for its historic resources, making the site more vulnerable to the threats of commercial developments.” 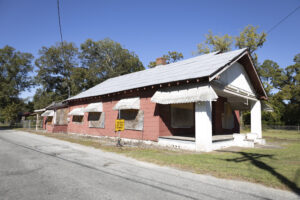 This house in Camilla, a Mitchell County city about 25 miles south of Albany, also made this year’s list of the country’s most endangered historic places as compiled by the National Trust for Historic Preservation. The home was used for “nursing” in the sense of caring for mothers and newborns. It was operated by Beatrice Borders (1892 to 1971), who served Black women in the era of Jim Crow racism and segregation. Known as “Miss Bea” or “Ms. Bea,” Borders worked with her mother — for whom the home was named — and her grandmother. According to the National Trust, they provided “the only known birthing center of its kind for thousands of Black women in the rural South during times of challenging economic and living conditions.”

Local advocates got the property listed on the National Register of Historic Places in 2011, citing its significance to Black, women’s and commercial history. A local nonprofit, the Georgia B. Williams Nursing Home, Inc., aims to preserve and reuse it as a museum and educational center, and hopes to offer scholarships to women studying midwifery and childcare.

“This unassuming structure has not received the attention that its history deserves,” says the Georgia Trust. “The building has been vacant since 2004 and is currently boarded up. Due to deterioration over the years, the home is now uninhabitable, making it more susceptible to threats of demolition. However, thanks to dedicated family and community advocates, the home where Miss Bea served for so many years is now gaining the recognition that may bring about its revitalization.”

This school and its adjacent church in Brunswick are the only remnants of the historic Pennick community, which was founded by descendants of people who had been enslaved.

“Over the years, like many small congregations, Good Shepherd has seen a decline in parishioners,” says the Trust. “Financial resources for the maintenance of the schoolhouse have dwindled. Recent hurricanes and weather damage have taken a toll on the building, leaving portions exposed to the elements. A charming but unassuming structure, the Good Shepherd School is worthy of preservation as a resource to the community to continue the legacy of its founding deaconess.”

This former hotel in Thomasville, a city in South Georgia’s Thomas County, is linked to Black history and the segregation era. From 1949 to 1969, it was the city’s only hotel that exclusively accommodated Black travelers during segregation. It then became an office building that briefly housed a chapter of the NAACP.

“The building has remained vacant and unused since 2001, leaving it in a severe state of neglect,” says the Trust. “Recent efforts to stabilize the building have been successful, yet the long-term future of this important African American cultural resource remains in question.”

This cemetery at the Old State Prison Farm in Milledgeville is another site reflecting the historically heartless treatment of prisoners. The cemetery has more than 600 graves of prisoners who died in 1911 through 1936. “License plates manufactured on site by the prisoners were used as grave markers for the deceased prisoners, indicating each grave by number, not name,” says the Trust. The prison closed in 1937 and the cemetery was left unattended.

“The history of this site has remained an afterthought through much of the last century,” says the Trust. “Trees and undergrowth took over and obscured the graves, while the license plate markers have been left to rust and deteriorate. Efforts to identify the graves indicate the likelihood of more unmarked graves at the site. Without continued advocacy and acknowledgment, the history and context of the site will be threatened once again.”

This bridge in the small town of Woodbury in Meriwether County was built in the 1840s either by Horace King, a former enslaved person who became a builder and engineer, or his son.

“Because the Red Oak Creek bridge has remained open to traffic, there is a consistent threat of damage to the structure,” says the Trust. “A recent accident damaged several structural braces inside the bridge. With its popularity, the bridge provides an opportunity for improved heritage tourism, greater access for recreation and continued appreciation of history, but first, further protection of the bridge is necessary to ensure its continued longevity.”

These ruins in the coastal city of Darien are the remnants of a sugar mill and rum distillery dating to the early 1800s. They are made of tabby, a form of concrete produced from oyster shells. The complex was operated by enslaved people, whose living quarters are among the surviving ruins. The complex closed following an 1824 hurricane and the land was converted to a cotton plantation. After the Civil War, materials and pieces of tabby were sold to freed people, who established a community nearby named Carnighan.

“Being built along the Carnochan Creek, the ruins have worn away over time due to the eroding shoreline,” says the Trust. “The current residential community has maintained care for the ruins as best they can; however, working buildings are being lost into the creek. The walls of the mill have collapsed and one building has been completely lost. The effects of climate change are a direct threat to this early coastal resource.”

This campus in Athens was established to educate African American students in the segregation era, starting in the late 1800s. It currently has three buildings, one dating to the 1930s and the others to the 1950s. The Clarke County School District recently proposed demolishing at least one of the buildings to build and operate an early learning center.

“With no preservation guidance, the site’s historic architecture risked being severely altered or lost,” says the Trust. “Local partners and community members have worked tirelessly to advocate for sensitive reuse of the existing buildings, allowing the new learning center to have a tangible connection to its important cultural history. The school district has agreed to reconsider its proposal, though final plans have not been approved and a preservation outcome is not guaranteed.”

The “Thicket Ruins,” where a sugar mill and rum distillery stood in the early 1800s. (Photo by Georgia Trust for Historic Preservation.)