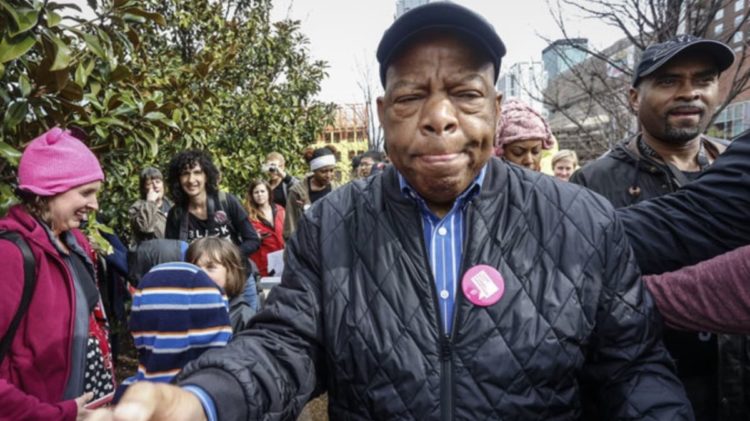 Congressman John Lewis participated in a march in Atlanta to protest President Trump, who denigrated Atlanta and Lewis' job in serving it. Credit: fox25boston.com

The costs can be attributed to overtime pay for police officers, firefighters and corrections officers, according to Youlanda Carr, Atlanta’s budget chief in the Office of Budget and Fiscal Policy. The three department ran up budget overruns that total up to $16 million.

“At the beginning of the year, we had a lot of protests throughout the city and so we had a lot of overtime that we had to account for,” Carr said. “That is the main reason why police is over budget.”

The actual total cost won’t be known until further investigation is conducted into the cost overruns incurred in January by the three separate departments. In addition to overtime payment, the police and fire departments incurred costs related to pay hikes that weren’t included in the budget for a number of  job classifications.

Councilmember Alex Wan delved into the issue of breaking out the exact line items that caused the cost overruns – i.e., overtime pay and salary increases – as well as the potential impact of the decision by the managers of the police department to leave some positions vacant. The vacancies could have resulted in the department being understaffed, forcing the department to respond to the protests by bringing in officers who had to be paid overtime.

Carr said the Finance Department will provide that information. Then she indicated the overtime pay is the crux of the issue. 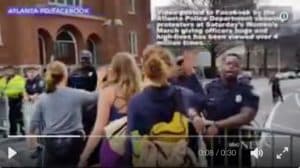 The Woman’s March in Atlanta gained widespread attention for the warm interaction between marchers and Atlanta police officers. A video of high fives was viewed by more than 4.5 million viewers on Facebook. Credit: hollywoodlife.com

“The overtime is what caused us to be over,” Carr said.

Here’s how the numbers break down:

Atlanta was a hotbed of anti-Trump protests as Trump took office and issued his proposed temporary travel ban.

Hundreds gathered at Atlanta City Hall on Jan. 20 and demanded that Mayor Kasim Reed announce that Atlanta is a sanctuary city that will not enable the arrest of undocumented individuals.

Atlanta made headlines in hollywoodlife.com, which posted participants in the Jan. 23 Woman’s March sharing high-five’s with Atlanta police officers. Good Morning America reported that more than 4.5 million viewers watched the video on Facebook. 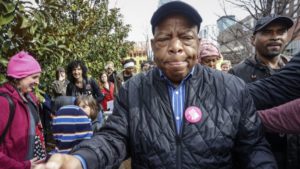 Congressman John Lewis participated in a march in Atlanta to protest President Trump, who denigrated Atlanta and Lewis’ job in serving it. Credit: fox25boston.com

Atlanta’s airport was the site of multiple protests by those opposed to Trump’s proposed travel ban, which he issued via executive order. It has since been stalled in court.

Carr presented the numbers by way of addressing the city’s overall cost overruns for Fiscal Year 2017, which ends June 30. Carr and others in the department delivered the update on multiple city accounts regarding revenue, expenses, debt, and investments.

The overall budget is over-budget by $8.5 million, Carr said. Some departments have not gone over budget. Others have.

The parks department, for example, is $3.8 million over budget. That’s a result of the department serving a growing number of children and older residents. The higher costs stems from everything from supplies for activities to increased usage of water and sewer, Carr said.

Atlanta has top credit ratings from the big three rating agencies. The city’s total debt is $6.94 billion. More than three-quarters of that sum is related to Atlanta’s airport and the upgrade to the city’s sewer system.

Confederate monuments: A chance to reassess the past with perspective of today
David Pendered June 15, 2020 5:09 pm