Antonin Scalia and the splintering of the conservative movement 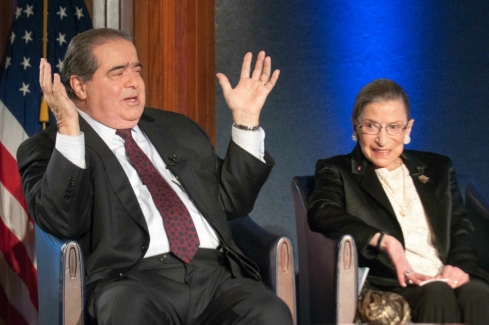 It says something about the current fragility of our political system that the death of a 79-year-old man with a lot of health issues and a penchant for the good life should have caught so many people completely off guard, and spurred so much talk of constitutional crisis and political war.

It took hours before the simple act of pronouncing U.S. Supreme Court Justice Antonin Scalia dead at a Texas hunting ranch was accomplished, and that was minor compared to the disarray which ensued in Washington, where a partisan battle was at full throat before the body had been flown back to the nation’s capital.

It wasn’t surprising Republicans would want to stall the appointment of Scalia’s successor until after the presidential election, just as Democratic Sen. Chuck Schumer advocated when the shoe was on the other foot. But as a matter of decorum it nevertheless seemed heavy-handed of Majority Leader Mitch McConnell to declare a hold before a nominee had been mentioned. Scalia himself, an advocate of the strong executive model of government, likely would have clucked at the way it was handled.

By drawing his line in the sand, McConnell also summoned what for many Republican voters has to be an existential question. Would they really want to wait for a Supreme Court nomination by… Donald Trump? Bernie Sanders? Hillary Clinton, nominating Barack Obama? Or perhaps Ted Cruz, who could not get another Republican senator to second a motion?

The hard choices facing voters this year attest to a general splintering of the conservative movement, as people thought of it when Scalia was confirmed in 1986. Conservatives may succeed in getting another reliable vote on the Court, but that will hardly replace what they have lost with the death of Scalia.

He was another example of New York values. He was Jesuit-trained and strenuously conservative, but he was cosmopolitan in his outlook. He enjoyed attending the opera with Ruth Bader Ginsburg. He was also, in the Southern expression, bad to hunt. He was criticized when he went hunting with Dick Cheney while the vice president had a case pending before the court back in the ’90s, and later enlisted Justice Elena Kagan, his ideological foe, to go with him on hunting trips. Former Justice Sandra Day O’Connor is said to have remarked that you could get anything you wanted from him if you took him hunting.
He liked big family sing-alongs and court hearings with a lot of tough questions and a few laughs. A sharp critic of government’s overreach, he seemed at the same time to have genuinely relished his government service.

There are a dwindling number of examples on the right or left of leaders similarly disposed to engage across a broad range of issues and maintain a coherent philosophical position. Roundly despised by progressives, he was a touchstone for conservative thought, beyond the normal bounds of the court. Conservatives may yearn for another Clarence Thomas, silent and dependable, but they need another Scalia, capable of sharpening and articulating their argument, not only in the chambers of the Supreme Court but in the larger marketplace of ideas.

After the obligatory tributes to Scalia’s memory, the aforementioned splintering of the conservative movement was much in evidence at Saturday night’s Republican presidential debate in Greenville, S.C. This ninth meeting was judged to be the most acrimonious so far, which is saying something considering how they started.

Without doubt, Trump has been the catalyst for most of the red-faced shouting in this presidential campaign. But it’s a mistake to blame him for the deep divisions over immigration, military intervention and financial policy which have collectively made a Trump possible.

Propelled by a ground game which has produced enormous strides at the state government level and a solid grip on Congress, Republicans now hold a tremendous amount of political territory, without at the same time being able to come up with a speaker to answer the president’s State of the Union message who they all can agree with.

Millions have been spent since Scalia joined the court in the cultivation of foundations and think tanks dedicated to producing new generations of conservative thinkers, and this has had an impact in changing the political climate. But there is no guarantee it has generated another one like him.