A hamlet of residences, shops and workplaces could be created if borders were woven together at Georgia's Tech's planned Technology Enterprise Park and Atlanta Housing's Herndon Homes development, according to planners with the ARC. Credit: Google Earth, David Pendered

Planners with the Atlanta Regional Commission haven’t given up hope that Georgia Tech’s next big real estate development can be intertwined with the Herndon Homes public housing development to create a pleasant community a few blocks north of Mercedes Benz Stadium. 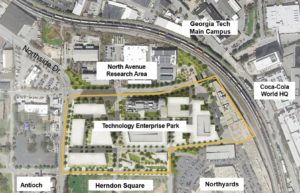 The area now has little sense of continuity. The two institutions own a total of 31.3 acres to the east of Northside Drive, and the tracts of land have been mistaken as potential parking lots for the stadium.

Planners have an idea that a little community could be woven together. They envision using the threads at the edge of Tech’s project and those of the new Herndon Homes – which has the added attraction of a planned grocery store the size of a Trader Joe’s, Aldi’s or one of the other grocers experimenting with smaller floor plans before the pandemic.

ARC’s planners gave the latest nudge in this direction in comments submitted in the preliminary regional review of Tech’s planned Technology Enterprise Park. ARC’s planners plainly suggested in their review, dated Aug. 7, that Tech seek to provide ways for folks at its site to cross easily into the public housing development to frequent its grocery stores and other destinations. Public comment on the review closed Aug. 24, according to ARC.

This is how ARC planners worded their recommendation, in their evaluation of Tech’s proposed development that’s to be complete in 2029 and is large enough to warrant review under a provision of state law as a development of regional impact: 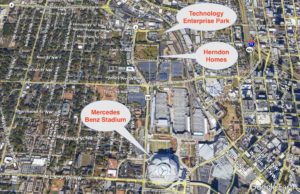 A hamlet of residences, shops and workplaces could be created if borders were woven together at Georgia’s Tech’s planned Technology Enterprise Park and Atlanta Housing’s Herndon Homes development, according to planners with the ARC. Credit: Google Earth, David Pendered

ARC’s planners were equally plain spoken in their 2017 review of the proposed redevelopment of Herndon Homes. A previous iteration of Herndon Homes was demolished in 2010 and, in January, the city’s housing authority started building a 2.0 version of Herndon Homes – with residences for senior citizens, younger folks, plus 22,500 square feet of commercial space and 17,500 square feet of space for community services, health and wellness, according to a document from Atlanta Housing’s Aug. 26 meeting agenda.

ARC’s recommendations in the Herndon Homes DRI had this to say of the project’s relation to Tech’s anticipated development at its Technology Enterprise Park: 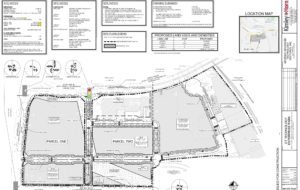 Tech’s proposal calls for a $750 million project comprised of about 1.7 million square feet of commercial, office and industrial space, and 416 units of residential multi-family.

The latest plan for Herndon Homes calls for a total of 692 residential units and 321 of them are to be priced at no more than 80 percent of the area media income. Neighborhood support facilities include plans for a grocery store, in 22,500 square feet of space, and 17,5009 square feet of space for community services/health and wellness, according to a document prepared for the Aug. 26 meeting of the board that oversees AH.

Previous Article
The particulars of absentee voting, because this year the picky things matter
Next Article
New initiative aims to prevent tens of thousands of metro Atlanta evictions