As e-bikes loom as commuting option, Atlanta scrambling to regulate their use 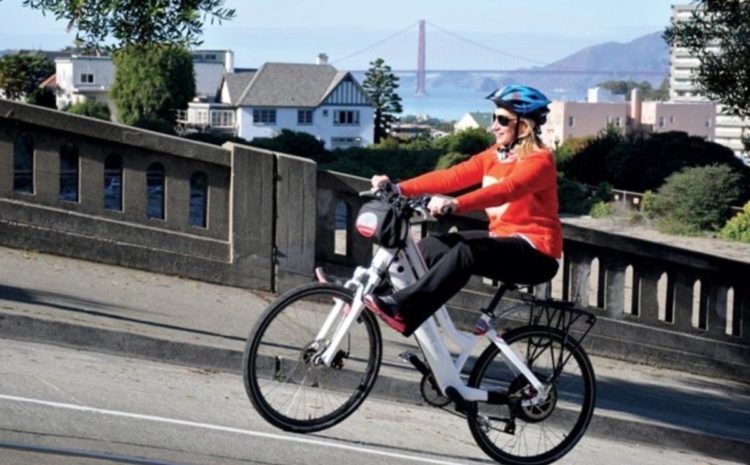 The steep terrain in San Francisco has proved to be fruitful ground for the renting of pedal-assisted electric bikes. Rates charged by Blazing Saddles start at $78 for a 24-hour rental. Credit: blazingsaddles.com

Atlanta is trying to get a handle on the use of electric bicycles, which are proliferating in the city and presenting new threats to pedestrians when the pedal-assisted e-bikes are ridden or parked on sidewalks, trails and in parks. The debate is to begin Wednesday in the Atlanta City Council’s Transportation Committee. 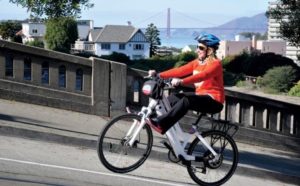 The steep terrain in San Francisco has proved to be fertile ground for the renting of pedal-assisted electric bikes. Rates charged by Blazing Saddles start at $78 for a 24-hour rental. Credit: blazingsaddles.com

The potential boom in e-bikes presents safety issues at a time the city already is struggling to keep up with crumbling sidewalks and curbside ramps that fail to comply with the Americans with Disabilities Act. Atlanta completed a study in 2009 that showed more than $200 million was needed to upgrade sidewalks and ramps.

Now, some e-bike riders are adding to the sidewalk situation by riding on sidewalks instead of the street, said Sally Flocks, who leads PEDS, Pedestrians Educating Drivers on Safety, which advocates for safe sidewalks and crossings. E-bikes that zoom along at speeds of about 14 mph present a safety concern, she said.

Another wrinkle is that a private vendor is bringing e-bikes into the city and renting them to riders, Flocks said. The issue is that both the business model and e-bike usage is unregulated, unlike the regulations adopted for the city’s rental shared bike program.

The proposed resolution would authorize e-bikes to operate in the city under rules to be created by the city. An ordinance would authorize the city to regulate the rental e-bike business and create codes for their safe operation.

The resolution was introduced by councilmembers Natalyn Archibong and Matt Westmoreland.

The paper notes that e-bikes are becoming popular in cities including Washington, New York and San Francisco. Atlanta could become the next major city to embrace e-bikes, given the success of the city’s shared bike program. The program started with 100 shared bikes at 22 stations, to over 500 bikes at more than 70 stations, the resolution states.

The proposed resolution does not mention e-bikes on sidewalks. The resolution does say. “the use of pedal-assisted electric bikes become a regulated use within the public right-of-way, city parks and trails.”

The resolution calls on the departments of law and public works assist the Planning Department in ensuring the e-bikes comply with all state and local laws and regulations.

The proposal says the city has an interest in regulating the use of e-bkes to protect public safety and ensure that they don’t obstruct public rights of way.

It requires e-bikers to yield to pedestrians at all times. It prohibits the riding of an e-bike while under the influence of alcohol or drugs. And it says helmets are recommended, but not required. Parked e-bikes are not to block pubic rights of way.

After the Transportation Committee acts on the proposed ordinance, it will be referred for further consider by the council’s Public Safety and Legal Administration Committee.

Previous Article
Meet the man who was helping the Westside before it was cool
Next Article
Column: Bernie and Billi Marcus to be honored by Hillels of Georgia