As architect John Portman gets recognized, the Hyatt Regency Atlanta is ‘renovated’

Such a strange juxtaposition.

Internationally-acclaimed Atlanta architect and developer John Portman is finally getting his due. Eighteen months ago, the High Museum of Atlanta featured a retrospective of his life’s work in art and architecture. The City of Atlanta has been going back and forth about getting a downtown street named in his honor.

And now a new documentary — “John Portman: A Life of Building” — has been released that places Portman as one of the most important architects of the 20th Century.

But at the same time as Portman is receiving his due, key pieces of his architecture are being destroyed.

The historical significance of Antoine Graves is that it served as the proto-type of one Portman’s greatest architectural designs — the Hyatt Regency Atlanta — a 1967 building that transformed the hotel industry by introducing the awe-inspiring 22-story, floor-to-ceiling atrium. 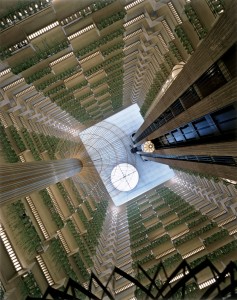 Sadly, the Hyatt Regency today is a bastardization of its former self. Renovation after renovation (including the one currently underway) has altered the marvel that once sparked the world’s imagination in downtown Atlanta.

When the Hyatt Regency opened in 1967, it instantly became one of the popular attractions in Atlanta. The famous blue dome — the now-closed Polaris Restaurant — introduced the revolving restaurant high above Peachtree Street. 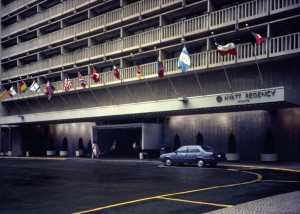 But it was the Hyatt’s unique entrance that created the greatest dramatic effect — also known as the “Jesus” moment. 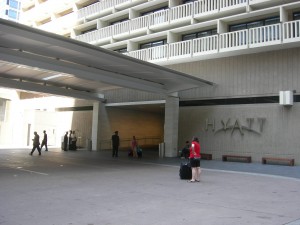 The entrance of the Hyatt Regency as it looks today (Photo: Maria Saporta)

Portman had designed the Hyatt’s front door as a tunnel that got increasingly narrow until one stepped into the mind-blowing atrium complete with the sparkling-lights on the glass elevators — leading people to either say “Wow” or “Jesus” — even after repeated visits.

Today, that dramatic entrance has been replaced with a large glass entrance complete with a mega-revolving door and a non-descript feel. Gone is all the drama and suspense that used to welcome visitors to the space. 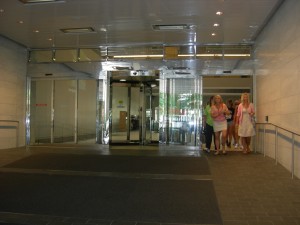 Inside, one key alteration is the floor. Portman had designed a beautiful fan-pattern of tiles that provided texture to the space. Now that floor has been replaced with sterile white stone — a high quality finish that is completely disrespectful to the historical integrity of the original vision. 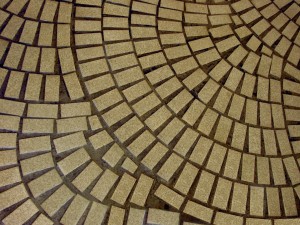 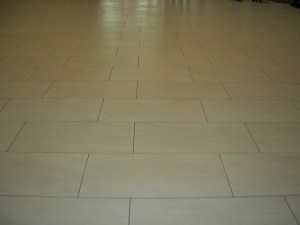 In the documentary, there are countless images that remind us what the space used to be like. The floating bird-cage bar. (That space was turned into escalators going to the ballrooms downstairs). The ivy hanging down the interior floors — bringing nature indoors.

One of my favorite memories was the actual three-story bird-cage that had the most colorful parrots I had ever seen. That was one of the first features to disappear.

The recent screening of the Portman documentary at the Rich Auditorium was followed by a panel discussion that included filmmaker Ben Loeterman, Atlanta architect Mack Scogin and long-time Portman associate, friend and advisor Mickey Steinberg.

The documentary did a commendable job in explaining the impact that Portman has had in modern architecture and the fact that only now is he being recognized for his contributions.

Scogin described Portman’s trademark in the “layering of space and layering of texture” as one of his greatest contributions. “John has innovated and challenged the profession of architecture throughout his career,” Scogin said. “He piqued the imagination and lifted the spirit of millions of people.”

Former New York Times’ architectural critic Paul Goldberger, who is now with the New Yorker and is interviewed in the film, has said that Portman has been “the only architect of his era to create only a series of significant buildings, but a new urban type.”

After the Hyatt Regency opened, Paul Gapp of the Chicago Tribute wrote that Portman was “the most influential living American architect,” and added that “countless other architects have copied him but the music just isn’t the same.”

All that is true. But what is also true — which the documentary barely acknowledges — is that Portman was a controversial figure in the world of architecture and design. 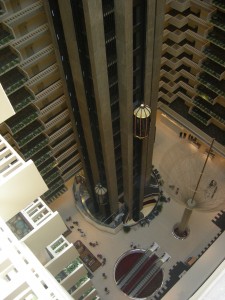 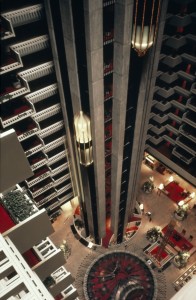 The American Institute of Architects looked askance at him for his dual role as architect and developer.

But more significantly, Portman has always had an uneasy relationship with the urban environment. Rather than welcoming the street, Portman created a myriad of tunnels so that people could be protected from the city’s streets and natural environment.

The documentary, however, primarily presents a favorable Portman perspective — one that claims that he single-handedly saved downtown Atlanta — a fact that is rightfully open to dispute. 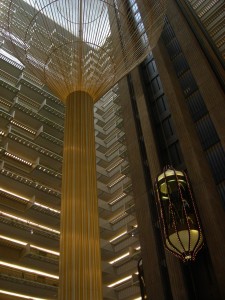 Looking up at the atrium today (Photo by Maria Saporta) 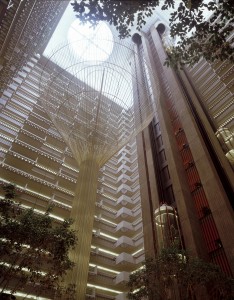 In fact, Portman’s relationship with preservation is also mixed. It was Portman who was responsible for the demolition of several of Atlanta’s landmarks including the Henry Grady Hotel that was built in 1923 and demolished in 1972 to make way for Portman’s Westin Peachtree Plaza hotel.

And yet — as part of history’s irony — now some of Portman’s greatest works are vulnerable to the march of time. Rather than being viewed as classic pieces of architecture that must be preserved as part of the architect’s original vision, they are being dismantled bit by bit — call it demolition through renovation. 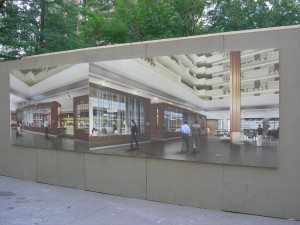 But, for whatever reason, Portman’s architectural works have not yet demanded the respect to be preserved. At the same time, the fanciful and multi-dimensional elements of Portman’s designs are not being protected in keeping with his original vision.

And in the case of the Hyatt Regency Atlanta, that is just a darn shame.