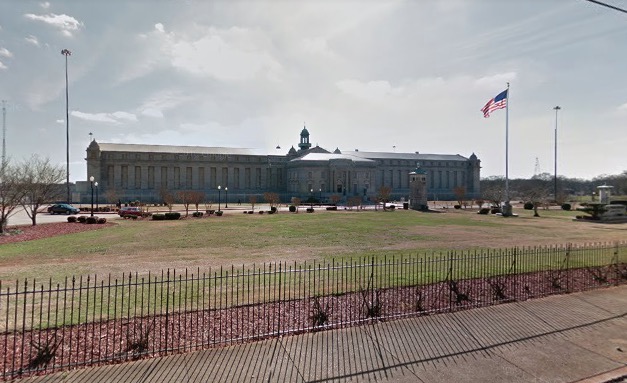 Georgia Gov. Nathan Deal was among the state leaders President Donald Trump called to a meeting on prison reform last week, as the president says he’s trying to get a federal prison reform bill refined and passed. But on the same day, Trump’s attorney general was in Macon, warning against too many changes. At the same time, other folks are calling on Congress to go further, to remake sentencing guidelines, not just offer prison reform.

In the form of the First Step Act, Washington is considering taking small steps down the same road as Georgia — essentially, more reentry services for people leaving prison. Some in DC want broader criminal justice changes. Georgia’s done that too.

In Georgia, Deal and his Criminal Justice Reform Council have pretty much won over both sides of the aisle in the state Legislature. 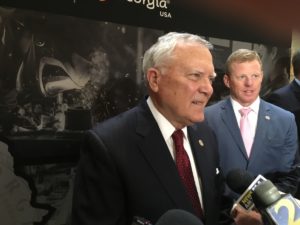 Nathan Deal, shown here in a May 2018 file photo, has said he hopes the next governor looks at cutting some mandatory minimum sentences. Credit: Maggie Lee

Over nearly eight years, big bipartisan majorities have passed several bills dealing with this or that Council recommendation. Say, raising the threshhold for felony shoplifting one year, or setting up and funding more vocational training programs in prisons another.

Along the way, some measures have met criticism, notably among Georgia’s 159 sheriffs. Some are and have been open, vocal and public; some others express worry privately.

And Deal didn’t get to everything he thinks ought to be done. He’s said he hopes the next governor looks into mandatory minimum sentences. Like, cutting some of them.

At Trump National Golf Club in Bedminster, New Jersey on Thursday, Trump sat with Deal and a handful of other state leaders the president invited to talk prison reform.

“One of the single most important things we’re doing is to help former inmates in creating jobs,” said Trump, in remarks to the press that day. He continued by saying that former inmates are now sought for jobs because the unemployment rate is low.

But, good economy aside, Trump also said his administration is working on getting refinement and Senate passage of the House’s bipartisan First Step Act. “Our first duty is to our citizens, including those who have taken the wrong path but are seeking redemption and a new beginning,” the president said.

The First Step Act is partly Georgia-grown. Gainesville Republican Rep. Doug Collins introduced it with co-sponsors in May, and Collins’ press release on its House passage shouts out his own state for “demonstrated success” in prison reform.

The federal bill steps up funding for recidivism-reduction services and evaluations that federal prisoners offer to inmates. Plans would include things like vocational training, anger management courses, and more time in halfway houses on the way out of prison.

Georgia has done some of those things on Deal’s watch, though it’s also done broader things beyond the the “prison” part of the criminal justice system.  His successful bills have included things like like funding and standardizing a sort of intense judicial supervision called “accountability courts,”  giving judges some flexibility to depart from bail schedules for some poor defendants, and less severe sentences for possession of the smallest amounts of drugs.

Deal emphasized the education piece in remarks to the media and the president on Thursday.

Georgia imprisons a disproportionate number of minorities, Deal said, but added that the share of African-Americans in Georgia prisons has fallen during his administration, as has the prison population as a whole.

“We have found that reentry is a vital part of this,” Deal said, adding that the most common characteristic of people in Georgia prisons was a lack of a high school diploma.

Deal says Georgia communities are safer — that violent crime and overall crime are down on his watch — while the state saves money.

But as Trump, Deal and others met in New Jersey, U.S. Attorney General Jeff Sessions was in Macon. He announced that Georgia will receive more than $100 million this year from a fund for services for crime victims. He also gave something of a law enforcement pep talk to a room full of area officers and TV news cameras.

Sessions thanked officers for their work and denounced those who denounce the cops.

But toward the end, he talked a bit about prison releases and recidivism. It would be possible to have more prerelease programs, he said, and said he supports that and he’s confident more will be done — though he also said there are limits on what programs can achieve. The recidivism rate won’t be cut by two-thirds, he said.

He said history teaches that a certain degree of punishment is necessary to reduce crime and that you can’t have a “revolving door” as he said existed when he became a U.S. Attorney in 1981.

Since then, said Sessions, “we got smart, we got tougher, our fabulous police departments upped their training and sheriffs did. We added federal officers, federal sentencing guidelines, mandatory minimum sentences, the Speedy Trial Act, ability to deny bail for dangerous criminals. All those things occurred and were done also in the states and it began to reduce crime.”

The First Step Act is agreeable enough to both parties that it got 360-59 House approval.

But some folks see it as far too modest, and little help to a problem of mass incarceration. They want to add serious sentencing changes to the bill — say, giving judges more flexibility to deviate from mandatory minimums.

It remains to be seen what will happen in the Senate.

Governor to next year’s leaders: look at links between dropping out and prison
Maggie Lee September 18, 2018 6:54 pm