At Georgia Tech, a quiet start for bitcoin

Georgia Tech likes to say that its students are “equipped for success in a world where technology touches every aspect of our daily lives.”

At Tech’s football game last weekend, the question was how equipped they are for the latest revolution in financial technology: bitcoin, a controversial form of virtual currency used for electronic transfers. 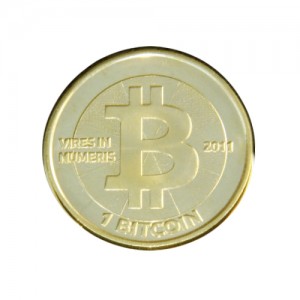 A Casascius bitcoin, a physical version of the digital currency, worth approximately $380 a coin.

Bitcoin cannot be stuffed into a wallet or bounced into a pint of beer. Unlike a credit card that charges fees, bitcoin transactions are recorded on an online public “blockchain” ledger that logs purchases and tracks balances for bitcoin investors.

Unlike a credit card, bitcoin works quickly and simply. You just scan your smartphone “wallet” across a QR reader to buy something. It is supposedly the world’s fastest payment method. There’s no PIN or physical card to protect, and because it operates from open source technology, there are little to no fees.

At halftime, the reinvention of money

At Saturday’s Georgia Tech v. Duke game, which coincided with Tech’s fall break, spot checks taken near the end of halftime showed only three customers had used bitcoin to make purchases at concession stands where the transactions are allowed.

But a reinvention of money has to start somewhere. My search took me to Tech alumnus Vidur Berry, who is bullish on bitcoins. He owns two or three and doesn’t want to part with them—at least not yet.

“I think of them as more of an investment,” said Berry, 24, who is graduate of the school’s IT management program. He believes they will increase in value as the finite number of bitcoins become more scarce.  There will never be more than 21 million bit coins created.

Meanwhile, some investors have been skittish about their volatility.  During the first weekend of bitcoin’s debut at Bobby Dodd Stadium, the value of a bitcoin began to fall on electronic markets, dropping 14 percent to $290 a coin. By Thursday it had rebounded to $350 and is currently valued at approximately $380.

A recent history of scandal

Freshman Radford Brosius was one student I talked to who said he’d probably use the online currency if he knew more about it. 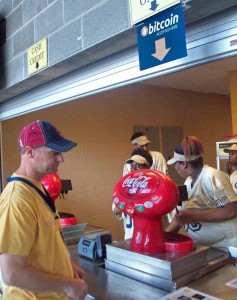 Andy Phillipson, director of engineering services for BitPay, buys a $6 soda with the virtual currency. BitPay has partnered with Georgia Tech to introduce bitcoin payment services on campus

What many people know about bitcoin is shady headlines from last year. Bitcoins can be exchanged without revealing identities of the people paying or receiving. In 2013, federal agents seized 144,000 bitcoins after shutting down Silk Road, an online ring for drug deals. The bitcoins were valued at $28.5 million.

That notoriety didn’t keep bitcoin from making a deal with Tech that was brokered by IMG, the university’s multimedia rights partner.

On Oct. 1, the university and BitPay, a Florida-based payment service provider that specializes in ecommerce, announced their partnership to bring bitcoin to campus. Bitpay co-founders Tony Gallippi and Stephen Pair are Tech graduates who bill their company as the world’s leading bitcoin payment processor. They said that the company has raised more than $32 million from investors including Sir Richard Branson.

According to a Sept. 24 story on the gatech.edu website, “It’s been a 20-year path for me to get here,” said Pair, who graduated from Tech in 1994 and began his career in consulting. “I recognized money was a worthless piece of paper with worthless ink, which meant it was just an informational thing, and you must be able to replicate it in a computer somehow.”

Along with concession purchases, students’ bitcoins can also increase the balances on their student “BuzzCard” accounts. The Barnes & Noble store in Tech Square will feature a bitcoin-enabled point purchase terminal for Buzzcards.

“Students who use bitcoin will now be able to purchase food and goods at almost all locations on the Tech campus,” said an Oct. 1 news release from Tech. “These new bitcoin venues, along with bitcoin wallet provider Pheeva’s announcement of a unique ‘Jacketwallet’ for Georgia Tech, hold promise for the role which digital currency may come to play in student life.”

The arrangement, according to university and company officials, makes Georgia Tech the first university to fully integrate the virtual currency into its student payment system.

For a school where every student has to take calculus and innovation is the norm, bitcoin would seem to fit in.

“Bitcoin has the characteristics of money (durability, portability, fungibility, scarcity, divisibility, and recognizability) based on the properties of mathematics rather than relying on physical properties (like gold and silver) or trust in central authorities (like fiat currencies),” according to bitcoin.org. “In short, bitcoin is backed by mathematics. With these attributes, all that is required for a form of money to hold value is trust and adoption. In the case of bitcoin, this can be measured by its growing base of users, merchants, and startups. As with all currency, bitcoin’s value comes only and directly from people willing to accept them as payment.”

A bit of interest so far

Bitcoin transactions debuted at Bobby Dodd Stadium Oct. 4, when the Yellow Jackets beat University of Miami. There were nine bitcoin purchases at that game, according to school and company officials. Bitpay signage can be seen in the stadium at field level, and will be seen at Yellow Jacket basketball games in McCamish Pavilion this season too. “With more games, as [bitcoin] progresses, people will know more about it,” predicted Chris Yandle, Tech’s assistant athletic director for communications and public relations. 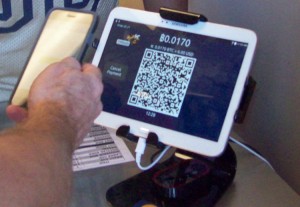 A Bitcoin scanner records a customer’s purchase via cellphone

Several students said Saturday they expect the currency to catch on. After all, Tech is an institution that prides itself on being “a national leader in managing the global transition from an industrial economy to an information economy.” And a new type of economy naturally will test new types of currency.

“It’ll take time, but this is a technology school and there are a lot of adopters here,” said Christian Dicenzo, a 23-year-old senior and mechanical engineering major.

If you’re interested in glimpsing the future of currency and some gridiron action, Tech’s remaining home football games are Nov. 1 (Virginia) and Nov. 15 (Clemson). Concession stands near aisles 113, 115 and 132 accept bitcoin, which can be set up at bitcoin.org.