Remembering the long, slow days of the Clinton impeachment, on the eve of what looks like a shorter one

On a corner wall of my office there still hang two of the long tally sheets reporters used — maybe they still do — to record votes in the United States Senate. They are a memento of the final day of the 1999 impeachment trial of Bill Clinton, the vote count which found the president not guilty on charges of perjury and obstruction of justice.

It was both a momentous and deeply dispiriting experience. Bob Lefsetz wrote this week that the Trump impeachment is like “watching an endless movie where you know the end.” The Clinton impeachment trial was like that, but more so. Without the urgencies of an election year pushing it along, the 1999 impeachment trial stretched over 36 days, much longer than this one seems destined to last.

It was also like a jury trial in which the jurors push each other aside trying to get out in the hall during breaks to get in front of the cameras and voice their opinions. There were a lot of references to how the subject matter of the trial — sex — made it uncomfortable for the senators, but when the lights were on them, they didn’t seem to mind at all.

With the perspective of more than two decades, Lindsey Graham’s speech laying out the House prosecutors’ case against Clinton is a wonder. It anticipates many of the themes of the Me Too movement, and with only minor adjustments would work just as effectively against Trump as it did against Clinton.

“What’s a high crime? How about if an important person hurts somebody of low means? It’s not very scholarly, but I think it’s the truth,” Graham asked.

The truth, however, is also that if I was there when Graham spoke, I don’t remember it. It’s accessible to me now only through the blessing of CSPAN. What I do remember are long discourses on constitutional law, sleep-inducing as a school board meeting, and in particular, four Southern senators.

Sen. Jesse Helms of North Carolina, who suffered from a number of health problems, rested one leg on a footstool which matched his Senate chair during the trial. The most conservative voice in the Senate of that day, he had waited until right before the Senate trial began to announce to the Republican caucus that he would be voting for both articles of impeachment.

As the slower parts of the trial dragged on, Helms could occasionally be observed nodding off, his chin descending slowly to his chest.

A few seats behind the North Carolina Republican sat the South Carolina Democrat, Sen. Ernest “Fritz” Hollings, who would vote against both articles. Throughout the trial he wore a pair of super-dark glasses like those people wear after eye surgery. I’m sure he had a medical reason for them, but watching from the press seats overlooking the Senate floor, it dawned on me that Hollings was probably getting as much sleep as Helms, and he was getting away with it.

Toward the front sat Sen. Strom Thurmond of South Carolina, at 96 nearly two decades older than either Helms or Hollings, but far more alert. He sat straight up, pen in hand, taking careful notes, even though he knew just as well as his younger colleagues how he was going to vote. Privately, Thurmond had warned his fellow Republicans that impeaching the popular president would lead to no good, but he voted for both articles. 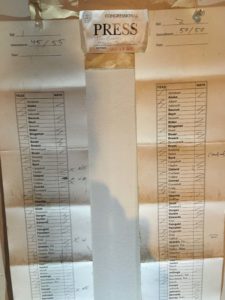 I remember Sen. Paul Coverdell of Georgia because of the way he sprang to his feet to make a motion on some procedural issue immediately after the trial had concluded.

Throughout the trial, Coverdell had been the opposite of the heavy-duty talkers competing for cable time in the halls. He was a certain vote for conviction, but said nothing quotable about it. Only when the process returned again to the grinding mechanics of Senate procedure did he jump back to life.

This impeachment is much different from the last one, in the severity of the charges, the strategies of both sides and the timing in relation to the next election. But are many connections as well. Hillary Clinton’s New York Senate campaign sprang directly from her husband’s impeachment, and Rep. Adam Schiff, the lead impeachment manager for the House Democrats won his first congressional election in 2000 by defeating Rep. James Rogan, one of the Republican impeachment managers in the Clinton trial.

That’s not to mention Ken Starr and Alan Dershowitz, back for a return appearance and consistent in what side they’re on, if not their legal arguments.